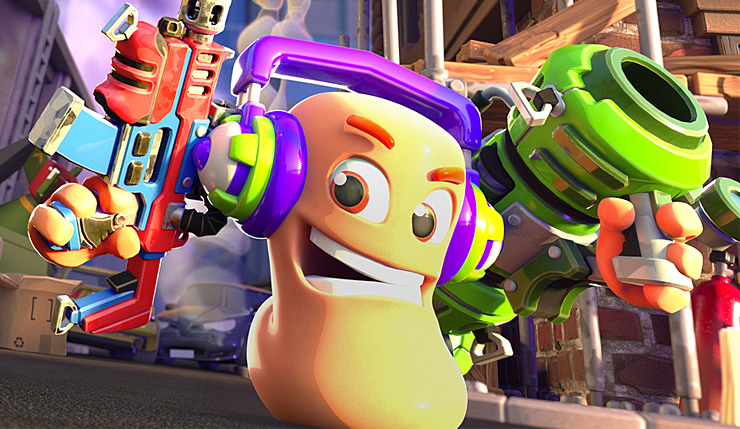 Sony and Microsoft have revealed the PS Plus and Games With Gold subscribers will be able to play for free in December. It’s another solid month for Sony, as they deliver Just Cause 4, Rocket Arena, and the new-release game Worms Rumble. On the other hand, it’s another slow month for XBL Gold subscribers as Microsoft focuses on obscure games like Bleed 2 and older fare like Saints Row: Gat Out of Hell.

Here are Sony’s descriptions of December’s lineup of PS Plus games. Bugsnax is also still free for PS5 PS Plus subscribers:

This is Worms like you’ve never played it before, with intense, real-time, arena-based 32 player cross-platform combat!  Use a variety of fan-favorite weapons like the Bazooka and Shotgun plus all-new additions to the armoury to bring the pain to your invertebrate opponents as you climb the ranks. Customise your worm, then take part in seasonal events, daily challenges and community collaborations for additional XP and rewards, and experimental game modes in The Lab. Get ready for Deathmatch and Battle Royale where you’re only ever a Holy Hand Grenade away from death!

Rockets rule everything in this explosive online 3v3 shooter where you’re never out of the action.Try out a roster of fantastic heroes with distinctive rockets and abilities to rule the arena. Learn how to time your dodges, lead your targets and unearth new strategies based on your squad and try out in-game items such as the Rocket Magnet, Trip Mine and Speed Boost to change the course of combat. Dive into Knockout for classic 3v3 competitive action, or practice your favourite combos against RocketBots first. Compete to score goals in Rocketball, control zones in Mega Rocket, and go for the gold in Treasure Hunt.

Jump into an action-packed open-world sandbox experience and cause chaos with a wide selection of weaponry, vehicles and gear as Rico Rodriguez skydives into the exotic climes of South America. Explore the remote South American country of Solís, 1024 square kilometres of exotic playground, from rainforest, to desert, to snowy mountain peaks, brooding with conflict, secrets and untold danger.Fight Black Hand, a tech-driven private military organisation, under terrifying environmental conditions, including treacherous tornadoes and tropical lightning storms, and use never-before-seen in-game physics to turn the extreme weather to your advantage.

Sony will also be offering a free multiplayer weekend starting on December 19. Play any online multiplayer game without having to sign up for PS Plus!

Meanwhile, here are your December Games With Gold:

From the creators of the Book of Unwritten Tales-series, play as Constable Anton Jakob Zellner in 1964 London, who is on the hunt for the legendary master thief, The Raven. Classic murder mystery locations, high quality acting, and a compelling cast of characters are featured in a thrilling, crime story whodunit where everyone has something to hide, and the Raven is always one step ahead!

As the pink-haired heroine, Wryn, defend the world from an invading force of villains in seven intense levels with over twenty-five boss battles. Master the art of air-dodging and take down a relentless barrage of bad guys in this furiously fun and fast-paced action-shooter and help Wryn live up to her title as the Greatest Hero of All Time!

Play as fan favorites Johnny Gat and Kinzie Kensington as they tear apart the underworld in a quest to save the soul of the Boss. Shenanigans ensue as they wage war against the Prince of Darkness, using an arsenal of underworld-themed weapons, and soar through the air on fallen angel’s wings, in this over-the-top open-world playground.

Hep Charlie Blackmore, the world’s tiniest Russian stacking doll, embark on an adventure to rescue his family from the nefarious industrialist, The Baron. Explore a vintage world inhabited by living Russian dolls and jump inside them to use their special abilities to solve a wide variety of riddles and challenges, in this imaginative 3rd-person puzzle adventure game.

What do you think about this month’s offerings? Hard to ignore the growing disparity between the PS Plus free games and Games With Gold. Those rumors that XBL Gold may be on the way out are starting to feel pretty plausible.