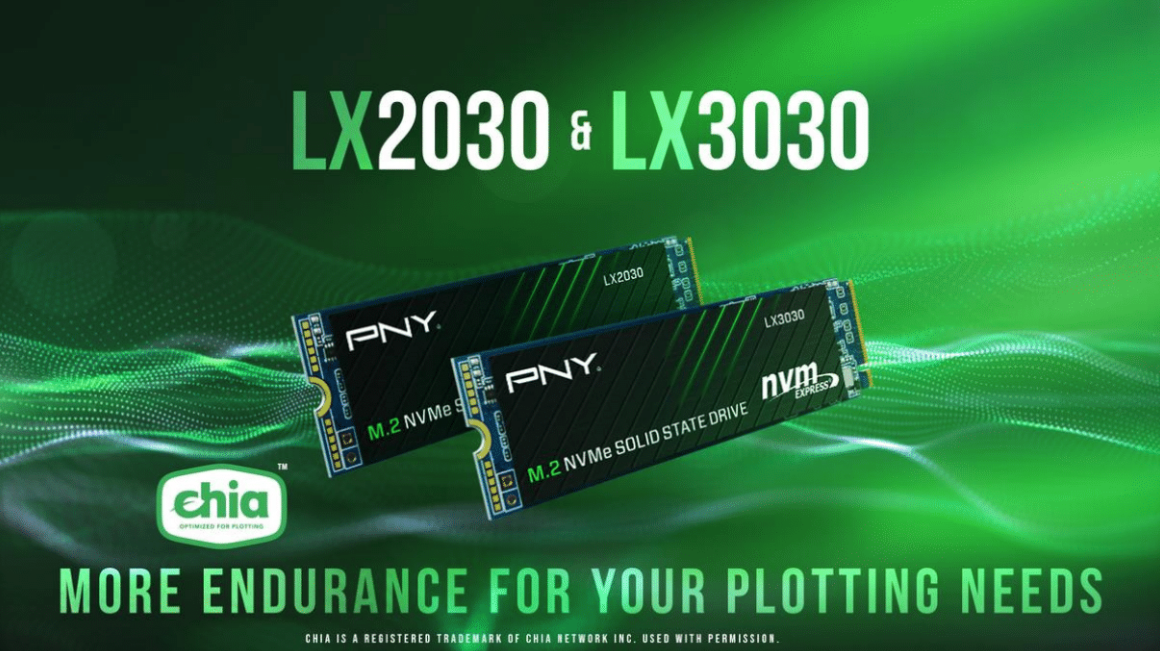 PNY has launched its brand new LX2030 & LX3030 M.2 NVMe SSDs which are certified for Chia (XCH) plotting. The two SSDs are designed for proof of space and time applications such as Chia and offer extreme levels of endurance compared to standard drives.

The PNY LX2030 and LX3030 M.2 NVMe SSDs are the ideal solutions for “proof of space and time” applications like plotting Chia Coin. Unlike “proof of work” models like bitcoin which consumes large amounts of power by requiring the miners to do complex mathematical calculations, “proof of space and time” applications utilize the unused space on a users’ systems, making it a more energy-efficient and environmentally conscious model.

To secure the blockchain, the data needs to be first created in a process called “plotting”, which is only required once per plot file. This process is write-intensive, so a desirable SSD for plotting has high sustained write bandwidth and endurance (TBW, or terabytes written). Typically this level of write performance and endurance was only seen on enterprise-class SSDs.

The PNY family of LX drives take advantage of Lifextension technology to offer a Chia plotting TBW rating of up to 54,000 in the LX3030 2TB. To deliver such a high Plotting TBW, the LX series of PNY SSDs utilize an advanced AI Engine, LDPC, and Flash I/F to improve NAND endurance, making them the best unit cost for plotting. Without sacrifice, you are able to take full advantage of Lifextension technology and the up to 18X better endurance by adding an LX drive to your system.

"I'm very excited that PNY has partnered with Phison to deliver the first SSD for Chia plotting. The LX3030 is tuned for the Chia plotting workload, which requires a high amount of sustained bandwidth. Users can be at ease knowing they won't wear out the drive easily - the LX3030 1TB can create 2PB of plots before wearing out! All of this is in an M.2 80mm form factor for broad compatibility. The entry LX2030 will be great for small form factor systems and 4-6 core desktops and laptops, like the NUC build." Jon-Michael Hands, VP Storage Business Development at Chia

The PNY LX2030 and LX3030 are engineered with the precision and quality our customers have enjoyed with the CS families of SSDs. We've taken the most advanced NAND flash and refined the LX family of SSDs to achieve a higher threshold for endurance and reliability. PNY's extensive testing and rigorous validation process ensure compatibility across various platforms and multiple operating systems.

PNY LX2030 and LX3030 M.2 NVMe Gen3 x4 SSDs are available immediately unfortunately, we weren't able to get a word on pricing yet.