[UPDATE] After the specs sheet surfaced online, we now have official ads that also leaked for both the Pixel 7 series. The ads that we have our hands on showcase the nuances or highlights of the upcoming flagships from Google.

The ads further corroborate with the information provided in the official specs sheet, so that is giving us another reason that we do know everything about the phone.

You can look at the ad for the Pixel 7 below, thanks to SnoopyTech.

And last, but definitely not least, the normal Pixel 7: That's it pic.twitter.com/QofDfp7lfw

And here's the ad for Pixel 7 Pro.

[ORIGINAL STORY] Google is launching the Pixel 7 series on October 6th, and over the past couple of months, we have seen enough about both the devices that are coming out. Some through the leaks while others through Google itself, and now, the entire specs sheet of the upcoming phones have leaked online, and well, you are not going to be surprised.

The Google News Telegram Channel posted a supposed Pixel 7 series specification sheet over the weekend, and it is coming from a follower who found it on a Taiwanese carrier's website. The sheet contains a number of new and previously leaked details.

Needless to say, the Pixel 7 series is a lot like the Pixel 6 series, but I will leave it to you to decide whether that is a good thing or a bad one. 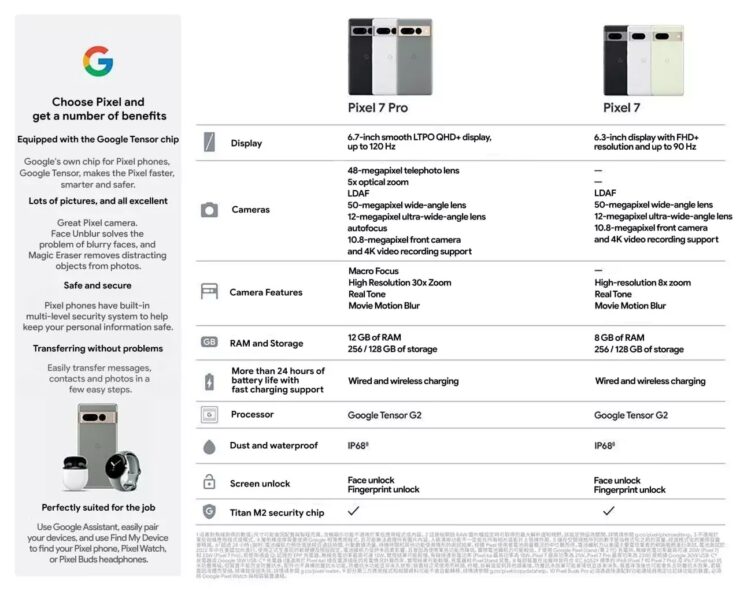 Both the Pixel 7 and Pixel 7 Pro come with a Tensor G2 chipset and will be sold in either 128 or 256 gigs variants. You have an IP68 rating, face unlock, and fingerprint unlock as well. Both cameras also share a 50-megapixel main rear camera, a 12-megapixel ultra-wide camera, and a 10.8-megapixel selfie camera that can record 4K video.

The Pixel 7 Pro gets its moniker thanks to the 6.7-inch QHD+ OLED screen (LTPO, 120Hz), 12 gigs of RAM, and a 48-megapixel telephoto camera along with autofocus for an ultra-wide camera. The standard variant offers a 6.3-inch FHD+ OLED screen with a 90Hz refresh rate, 8 gigs of RAM, and no telephoto camera, along with a fixed-focus ultra-wide camera.

An interesting revelation here is that the Pixel 7 Pro's telephoto camera is said to have a 5x optical zoom and 30x "high resolution" zoom. The spec-sheet also talked about some of the features that you can expect from the phones. Users will be getting the Movie Motion Blur option and Macro Focus mode (Pixel 7 Pro only).

The two phones are also said to come with wired and wireless fast charging, however, the new leak does not specify the charging speeds at first glance, but when you look at the fine print, you are looking at the Pixel 7 to have 21W fast charging and Pixel 7 Pro to have 23W, a rather slow charging speed compared to some of the other offerings in the market.