It is still too early to talk about Android 11 (or Android R if you're a purist). But, we can confirm that there is at least one device that runs the yet-to-be-released version of Android out in the wild, thanks to a Geekbench listing we stumbled upon. Now, Piunikaweb stumbled upon yet another Pixel running Android 11, but this time, it is the nearly three-year-old Pixel 2 XL. 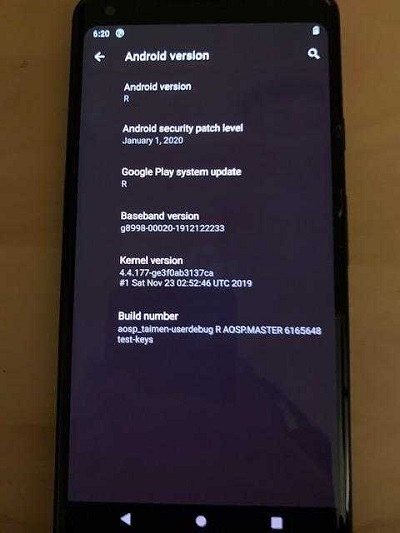 Now, the first question on everyone's mind must be just how did a Pixel 2 XL of all devices get an Android 11 build nearly two months before they're out in the open. The Android 10 developer preview was unveiled in March last year and Android Pie the year before that. So, it'll be at least a month before an early build is available to the general public.

Piunikaweb speculates that this is an early GSI (Generic System Image) of Android 11/R that somehow got out in the wild. A generic system image (GSI) is a system image with adjusted configurations for Android devices. It is Android in its purest form without any modifications.

Google usually sends these out to OEMs and developers to tinker around with and create apps and Android forks. This leaker could very well have gotten his hands on one such a build and managed to flash it on a Pixel 2XL.

This also effectively confirms the fact that the Pixel 2 XL will receive Android 11. The device launched with Android Oreo out of the box, and this will be its third and final major software upgrade. I wish we could say the same about literally any other Android phone.

Little is known about Android 11's features at this point. One leak speculates that it will let you store an encrypted version of identification documents such as a driver's license, and even come with a new 'low power' mode that will power the device long enough for you to present it when you run out of battery.