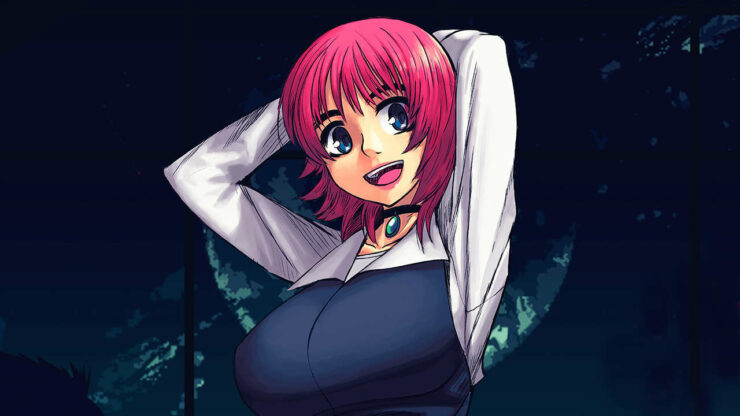 After getting hands-on with N1RV Ann-A: Cyberpunk Bartender Action for the first time at PAX East 2020, we spoke to Jacob Burgess, the Director of Operations and Community Manager for Ysbryd Games. Ysbryd Games was showing off their two new titles for 2020: N1RV Ann-A and World of Horrors, which just recently released on Steam Early Access.

It's N1RV Ann-A and the tagline is Cyberpunk Bartender Action. It is a visual novel set in a cyberpunk future where instead of making traditional dialogue choices, it's about the mood of the people you're serving drinks. The drinks that you serve them will affect how the story goes. So, if someone is like 'I don't want to get too drunk tonight' and you just give them a bunch of booze, they might leave and lose their job and then come back and try to drink their sorrows away. Or, if someone's like 'I want to ask somebody out and I need a little liquid courage' then, you know, it's not about getting people drunk necessarily but it's about how much you listen and interact with people that come into your bar. In that way, you find out more about the worldbuilding and the world around the bar that you're in Saint Alicia.

Thematically, how is that different from the bartending in VA11 Hall-a?

This is something that makes me very, very happy as a writer and somebody who loves stories. In Glitch City, it was kind of a rundown sort of cyberpunk town; on the streets, a lot of bad stuff was happening. The corruption and vice are very much on the surface. What you have available, because prices were inflated, for the BTC-operated chain corporate bars that you're apart of, you have chemicals that you mix together and make drinks. Because there's more money in Saint Alicia and the corruption is kind of in the background as you find out more about what's going on in the seedy underbelly of this beautiful resort down, we have more classic drinks and classic recipes because they can afford true alcohol in this city.

Are there any plans for a PlayStation Vita port for N1RV Ann-A?

We haven't announced anything at this time.

As for platforms, N1RV Ann-A will be on PS4, Switch and PC?

PS4, Switch and PC are what we have announced. As far as what we may do in the future, things are always changing. Keep an eye on Sukeban Games' Twitter, Ysbryd Games' Twitter and our respective discords for the latest news.

Do you see yourselves partnering with Limited Run Games for the physical print of N1RV Ann-A?

We haven't announced anything officially yet. I can see that happening, which technically answers your question.

Jill from VA11 Hall-A has become a trans-media character and she's been popping up in a lot of other games. How much experience will players need to have with both VA11 Hall-A and the plethora of other games that Jill's been in enjoy N1RV Ann-A?

None. You do not have to have played VA11 Hall-A to enjoy N1RV Ann-A. Because it's set in the same world, there is more world building and things like that, and there are narrative background threads that you can link together. There is no requirement for either.

I was just about to ask how the two were connected.

Chronologically, N1RV Ann-A takes place after VA11 Hall-A but it's in a different city and different part of the world.

Any characters we should see correlating between the two titles?

We have no announcements at this time.