Today Apple has released OS X Yosemite Developer Preview 6 to registered developers. This update comes two weeks after the Preview 5 was sent out to the registered Mac developers. Apple also released OS X Yosemite public beta a few weeks back creating much interest in the latest OS offering. This ensured for the Cupertino to be extensively reported to for the bugs and issues creating a wider testing audience. 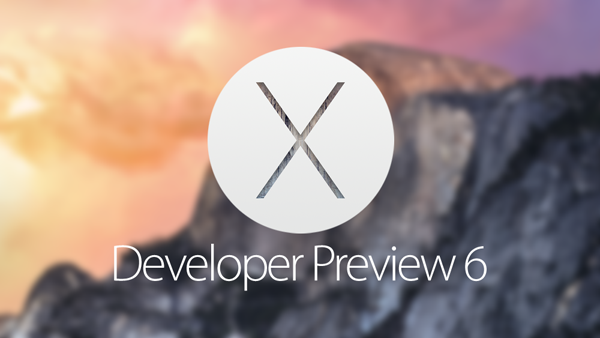 OS X Yosemite was unveiled at the packed event of WWDC 2014 keynote. The latest OS brings new features improvements. However, the biggest highlight of the OS is its offering a minimalist, flatter look matching the iOS 7 helping Apple achieve a uniform and consistent look through out its product lineup. OS X Yosemite introduces a much improved Notification Center and improves Mail Drop, new iCloud Drive integration, better integration with iOS 8 through Continuity and much more.

The latest Mac OS X Yosemite brings in a much modern look to the desktops and laptops with an increased focus on translucency and redesigned dock, windows, and logos. Integration with third-party apps, a retooled Spotlight search with new data sources, and other features including some for Mail, Safari and Messages are part of the latest package.

As the Developer Previews are coming, more and more features, bug fixes, and improvements are becoming part of the Yosemite 10.10. You can get the OS X Yosemite Preview 6 though Mac App Store > Software Update and also find it in the Dev Center. Here is the list of supported Macs:

Deal of the Week: 43% Discount on the Windscribe VPN Pro Plan