The OnePlus Z is said to be the company’s more affordable solution for customers to own a premium handset without spending too much money in the process. Naturally, there are going to be a few comprises you’ll have to make, but overall, we’re expecting a solid device in the works. Evidence that the smartphone appears to be promising has been detailed in a new benchmark leak, where the OnePlus Z has apparently been spotted touting ample amounts of RAM.

8-Core Chipset Could Be the Snapdragon 765G, as Shown by the Scores Obtained by the Alleged OnePlus Z

Over at Geekbench, scores of the apparent OnePlus Z have been spotted, highlighting that this model will sport a less powerful SoC than the Snapdragon 865. Of course, that’s to be expected in order to keep the retail price down, and it’s highly likely that the device features a Snapdragon 765G. It’s also possible that the OnePlus Z will arrive with a slightly powerful Snapdragon 768G, but let us see what OnePlus plans are when it officially announces the affordable model.

If the scores don’t impress you, then perhaps the RAM count will. According to the Geekbench results, the OnePlus Z may arrive with 12GB RAM. It’s not confirmed if OnePlus will stick to the slower LPDDR4x or the faster LPDDR5 standard. Regardless, more memory in a smartphone like this means more options for users when it comes to multitasking, such as allowing more apps to run in the background effortlessly. 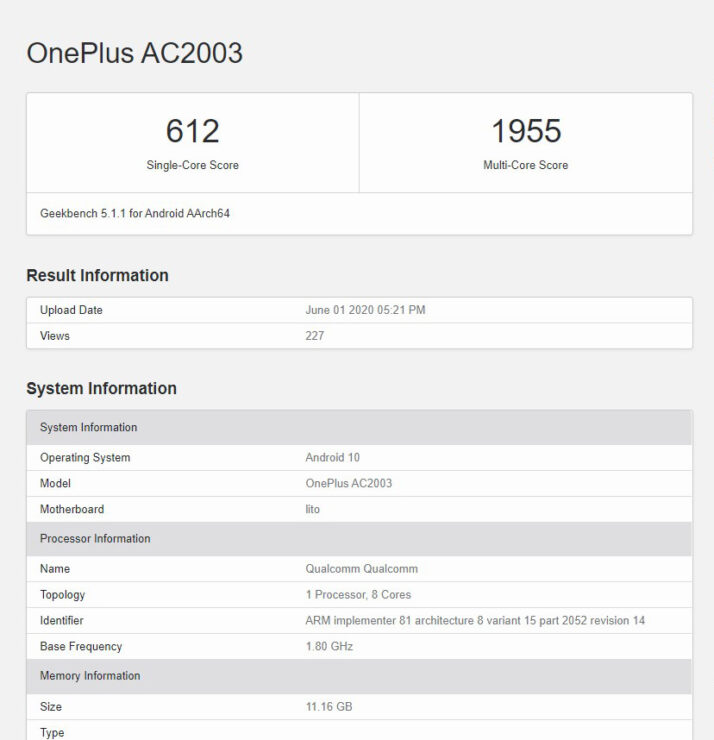 Looking at these specifications, the OnePlus Z is by no means a flagship smartphone. It’s a mid-ranger with decent hardware and looking at how expensive smartphones are becoming, perhaps it’s time to look at the value other handsets bring to the table. Sure, there will be compromises that users will have to deal with when picking up the OnePlus Z, but there are a lot of people that simply don’t want the best of the best.

If you want to learn more about the OnePlus Z, here’s a detailed roundup of everything you need to know about the mid-ranger.