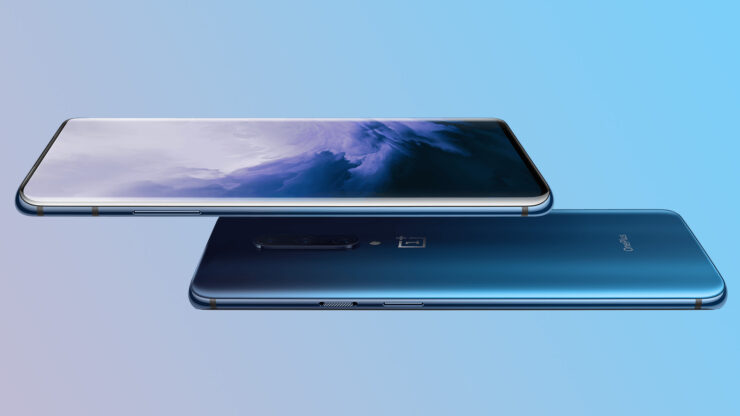 Although the OnePlus 7T has been unveiled already, the ‘Pro’ model hasn’t made an official appearance yet. The phone is expected to look a lot like the OnePlus 7 Pro and some recently leaked OnePlus 7T Pro renders back up this claim. That might not be an exciting transition for a lot of customers, but OnePlus’ ‘T’ series have never been heavy when it comes to massive design changes.

The high-quality OnePlus 7T Pro renders come from the leakster Ishan Agarwal. The paint job, which is reminiscent of the OnePlus 7 Pro’s Nebula Blue option is called Haze Blue. Like the OnePlus 7 Pro, this handset is also expected to have a pop-up selfie shooter, which explains the edge-to-edge display and slim bezels you see in the images. The screen will apparently be a 6.65-inch screen and it is almost guaranteed to have a 90Hz refresh rate. As you can see from the photographs, the phone will most likely have a curved display and rounded edges.

Moving on, the power key and the alert slider can be spotted on the right-hand side in the OnePlus 7T Pro renders, while the volume rockers are on the left. The three rumored camera sensors can also be seen, stacked vertically on top of each other. Below the camera system, an LED flash unit can be seen, just above the OnePlus logo.

Although it’s difficult to make this out from the OnePlus 7T Pro renders, the phone is expected to have a metal and glass body. On the bottom, a Type-C USB port and the main speaker will supposedly reside. A secondary speaker is expected to go under the earpiece grille.

These OnePlus 7T Pro renders are pretty official-looking, and as the phone will be launched on October 10, it wouldn’t be long before we get to see it in flash. While the phone looks like the OnePlus 7 Pro, its performance will be boosted by the Snapdragon 855 Plus. We will find out more in three days when the flagship is officially announced in London.