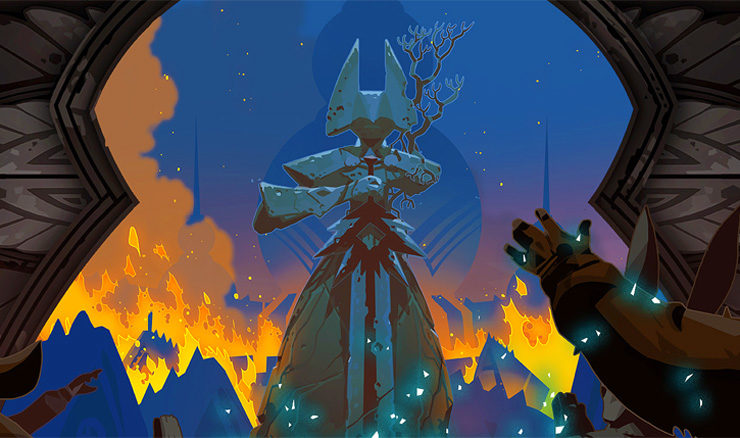 Looking for a game that recaptures the illusive magic of The Legend of Zelda: Majora’s Mask? Well, then you might want to give Omensight a look. The latest title from Spearhead Games (Tiny Brains, Stories: The Path of Destinies), Omensight combines the cel-shaded visuals and looping “Groundhog Day” structure of Majora’s Mask with a slightly darker, murder-mystery narrative. You can check out a gameplay-footage-packed developer video, below.

Here’s a description of Omensight and its story, courtesy of Spearhead Games:

“In Omensight, you're the Harbinger, a mythical warrior who's summoned in times of crisis. When you appear in the world at the beginning of the game, you immediately realize that a massive and bloody war is raging, but that's not why you've been summoned. As the night falls, you witness the end of the world. Voden, the God of Destruction, appears and brings about the apocalypse. Fortunately, you have the unique power to return to the morning of that fateful day. You quickly discover that Voden was summoned following a chain of events that was started by the murder of Vera, the godless priestess. As the Harbinger, you must solve that murder if you hope to save the world.”

Fans of Majora’s Mask’s time-turning gameplay will love how Omensight plays with the intersecting and conflicting fate’s of all its lead characters - each time loop brings you closer to the truth and one step closer to preventing the end of the world. By interacting with opposing sides of a great war, players must decide who is telling the truth and, ultimately, who to trust.

Sounds promising! It will be tough for Omensight to live up to Majora’s Mask, but hey, if the game’s even a fraction as memorable as Nintendo’s classic, it will be worth playing.

Omensight will launch on PC and PS4 on May 15 and will set you back a mere $20. Anybody planning to give the game a go?