Everybody has a day (or, more likely, many days) they wish they could repeat. That one where something bad happened, or perhaps you just failed to take advantage of a rare opportunity. Omensight, the latest title from developer Spearhead Games (Tiny Brains, Stories: The Path of Destinies) toys with the time travel fantasy, combining a Groundhog Day time loop mechanic with a twisty murder mystery.

Of course, Omensight is far from the first game to delve into the realm of time travel – games like The Legend of Zelda: Majora’s Mask and Life is Strange have already tackled the subject with great success. Those aren’t easy games to be compared to. Is Omensight a tightly-wound temporal tale, or should it be wiped from the timeline? Let’s find out… 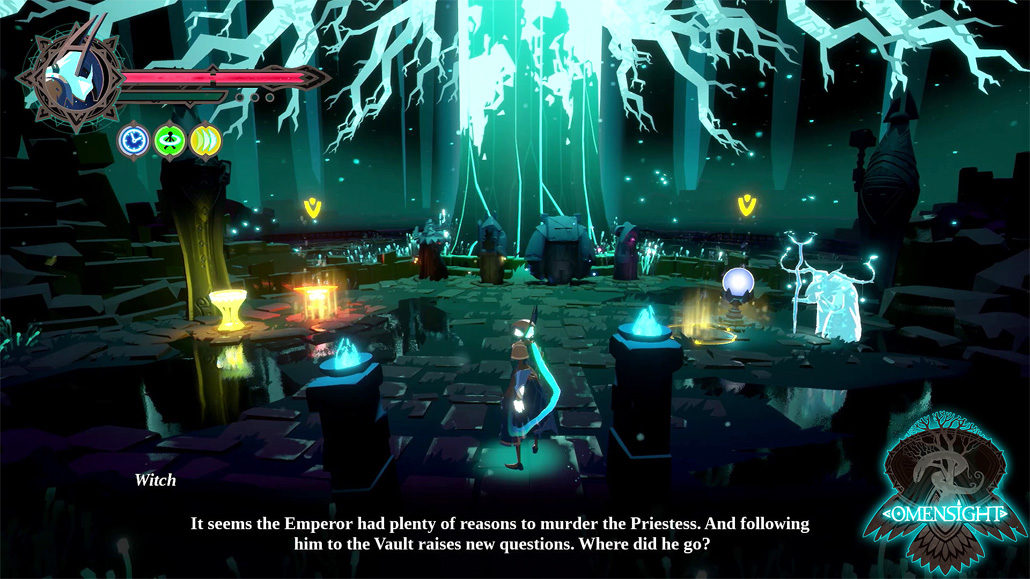 Omensight takes place in Urralia, a classic, kid-friendly fantasy world populated by talking dogs, cats, birds, bears, rats, and other fuzzy critters I’m probably forgetting. Urralia is embroiled in a war between the Pygarian Empire and the ratfolk of Rodentia, which is interrupted when the world suddenly comes to an explosive end courtesy of the big, bad purple god of destruction, Voden. You play as the Harbinger, a stoic mystical warrior, who possesses the rather convenient ability to travel back in time a single day. You know the end of the world was somehow brought about by the killing of a priestess named Vera, and it's up to you to solve and prevent her murder, thus saving the world.

Omensight’s setup is certainly intriguing, but the way the mystery plays out isn’t as satisfying as it could be. Unlike Majora’s Mask, which let you roam as you liked in a semi-open world, giving you the feeling you were in control of your fate, Omensight’s story is told through repeated playthroughs of a very small handful of stages, all of which are very linear. 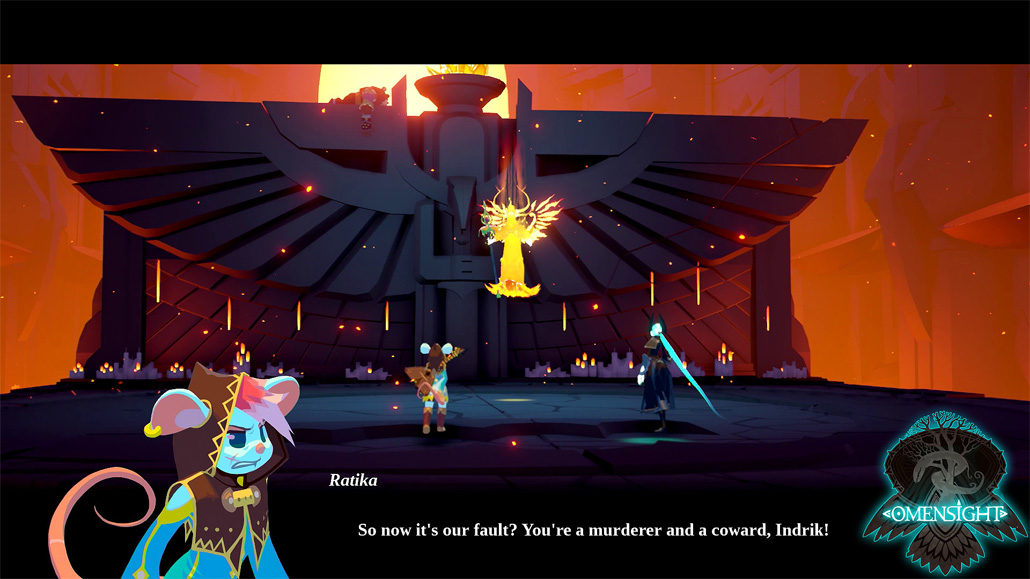 At the beginning of each newly-reset day, you pick a companion (the feline Pygarian general Draga, the rough-and-tumble grizzly bear Ludomir, the fast-talking leader of the Rodentians, Ratika, and a fourth character I won’t reveal so as not to spoil the story) and tag along as they go about their business. That business always involves fighting and platforming through some combination of the game’s four stages. Along the way, you’ll pick up hints, color-coded keys, and Omensights, which are particularly important breakthrough clues. You can show these clues to your partners, which may coax additional info out of them or convince them to embark on a new path or mission. A predictable gameplay loop emerges – work through the game’s stages with all the characters, get a new key and Omensight, then use them to get the next key and Omensight. Rinse and repeat three or four times, and the mystery is solved. There’s little, if any, real deduction of puzzle solving required.

If my description makes Omensight sound repetitive, well, it is. By the time you reach the end of the game, you’ll have played through some stages 10 times or more. Sure, every playthrough is a little different, with the time of day, enemy layouts, and your path through the stage changing, but it’s not enough to keep the game from feeling like a slog. You ought to feel fulfilled when the Omensight’s mystery finally starts to come together, but chances are you’ll just feel exhausted. 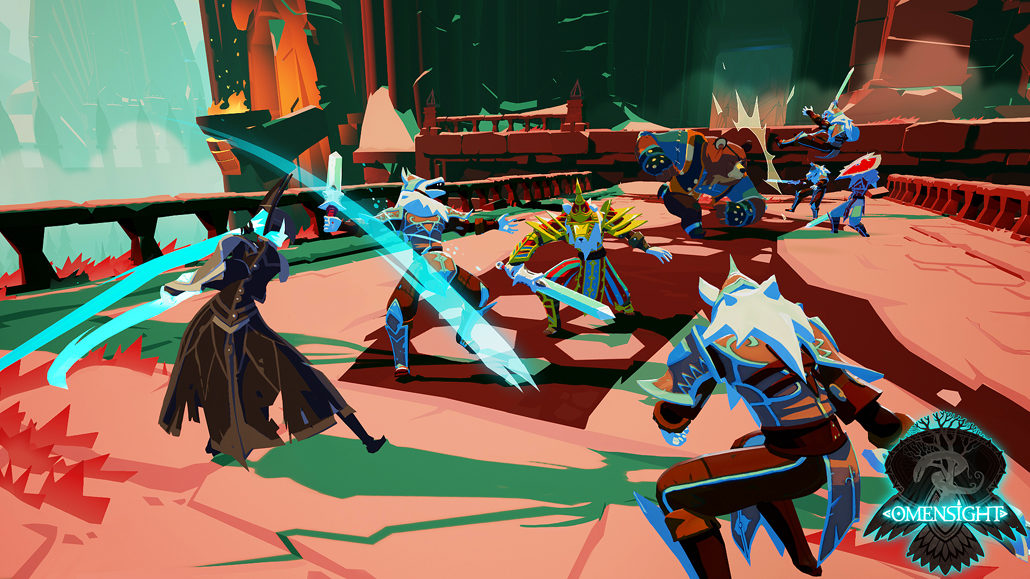 The grindiness is a shame, as Omensight’s basic gameplay shows promise. The game features a fast-paced Batman-Arkham-style “bounce from enemy to enemy while dodging attacks” combat system, which is easy to pick up. Maybe a little too easy – most of the abilities you earn aren’t really necessary (attack, dodge, and the slow-motion move are all you need) and my health bar rarely dropped below the halfway mark. In between the battles you’ll engage in some light platforming, which is a bit stiff, but generally fine. There are a few frustrating, poorly-balanced moments, including a surprisingly tough mid-game boss and a hair-tearing bit that requires you to escort a very slow-rolling tank, but, for the most part, Omensight isn’t too demanding.

Omensight’s graphics are striking but hardly groundbreaking. Games like Journey and Bound have done this look before, and, honestly, this style of visuals is starting to feel like indie shorthand for “We didn’t have enough money to give our game proper textures.” The game is also beset with some pretty serious slowdown and stuttering issues on PS4. 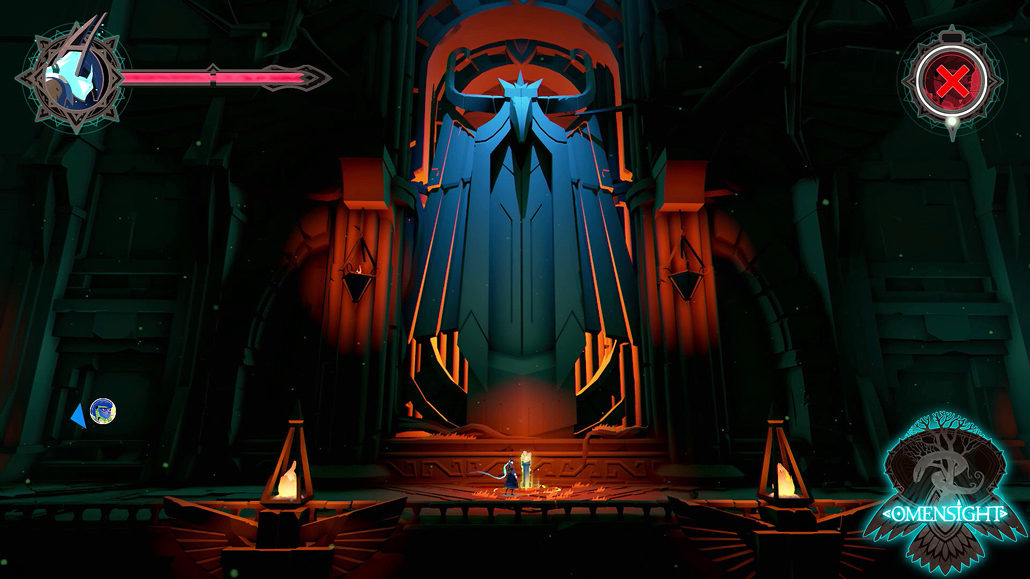 I feel like there needs to be more to Omensight. More polish, more variety, and, certainly, more content. The whole Groundhog Day setup ends up feeling like an elaborate way to transform about 90 minutes worth of material into a sellable six or seven-hour game. Granted, Majora’s Mask’s lauded structure was also an attempt to draw out a short, four-dungeon-long adventure, but Nintendo pulled off the trick much more gracefully than the makers of Omensight.

This review was based on a PS4 copy of Omensight provided by publisher Spearhead Games.

The makers of Omensight probably wish they had an infinite time loop of their own. Painfully repetitive and lacking in polish, this game clearly needed a bit longer in the oven. Forgiving Majora’s Mask fans may find Omensight’s story and action enjoyable enough, but many who buy the game will want to turn the clock back on their weekend.