[Rumor] Something very interesting cropped up on the forums of NoteBook Review (via User800). Basically somebody posted an alleged screen-shot of an Nvidia GPU with the name blurred out. The authenticity of this picture is not verifiable, but to the casual inspection it doesn't appear doctored. The benchmark run appears to be of the Maxwell Flagship GTX 880.

If you look very closely at the picture you can barely make out the "GT 8". If you look even more closely, you can spot one half of the second 8 following the first. So the alleged benchmark run is clearly of a GTX 880. Now some users in the forum were commenting on whether this could be the mobile variant of the GTX 880. Well, I think, there is a reason the original user so conveniently put in the CPUZ shot, something that wasn't really required. So that we can readily deduce it as a desktop variant. The i7 4770k is the Haswell LGA 1150 CPU and is most certainly not found in any notebook. There is a 0.1% chance that the mobile variant was being tested but I think we can safely ignore that possibility. 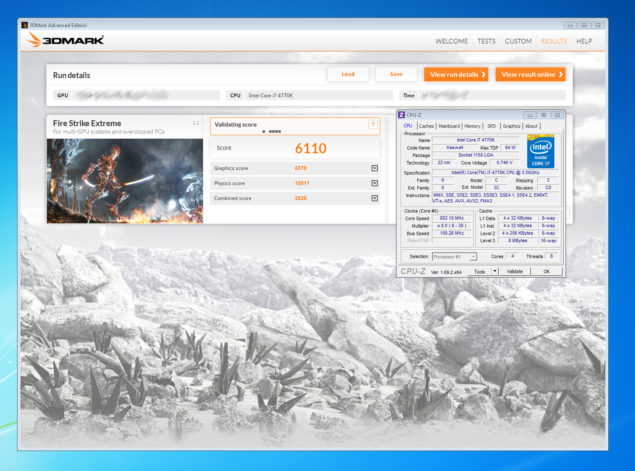 The Maxwell GTX 880 in this particular 3D Mark benchmark boasts a very impressive result of 6110. Since the GTX 780 scores around the 4500 Mark and the GTX 780 Ti scores around the 5000 Mark, this is impressive performance. Comparing it to its predecessor, the GTX 780 we see an almost 40-35% power jump which is quite decent. Now about the screen shot itself. One of the first thing to look for in obvious fakes is artifacting around the result area. The user posted a good resolution image and I could find no presence of any compression artifacts or bad Photoshop. So this seems to tilt towards an authentic screenshot. Of course if someone asked me to get an authentic looking fake out. I would SLI some lower end cards so I get a score of 6k, then Photoshop the name and selectively blur the same out. That way, there would be no fake-ness about the score and the name (where tell tale signs could lie) would be conveniently blurred. But this guy probably didn't do that and this benchmark run is probably legit.