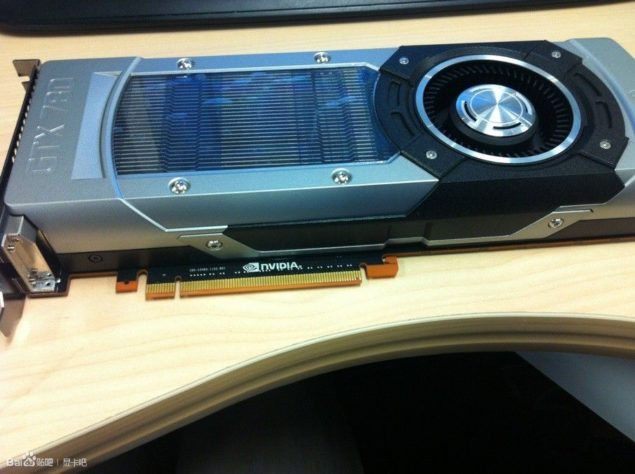 According to Fudzilla, NVIDIA's upcoming GeForce GTX 780 graphics card would cost around 500-600 Euros. The GeForce 700 series which is the refresh to current Kepler 600 series graphic cards would arrive during the last week of May.

We already know what the GeForce GTX 780 would look like and what specifications it would feature. The GTX 780 would be the flagship product of the 700 series and would be based on a cut down version of the GK110 core codenamed "GK110-300-A2". This core would have 2304/2496 cores and a 3 GB GDDR5 memory which would operate along a 320/384-bit memory interface. The GPU would make use of the cooler from GeForce Titan which would allow for better thermal specs providing users more overclocking headroom. The pricing is suggested around the  500-600 Euros mark for GeForce GTX 780 while overclocked models which would also be available at launch are going to cost slightly more.

Reports suggest that the GeForce GTX 780 would be the first GK110 GPU that NVIDIA would allow AIBs to offer with custom board models. So it won't be a surprise if we get to see an GeForce GTX 780 iGame Kudan in the future. Videocardz manged to find out a listing of the card which lists the ASUS GTX780-3GD5 that features Dual DVI, HDMI and a display port connector. The card is listed for 887 Euros which is extremely high but i have seen prices that high in early listings before, expect retail price to be around the suggested 500-600 Euros.

There's also some new details about the GeForce GTX 770 which is a rebrand of the GTX 680 making use of faster clock frequencies. The GPU comes with 1536 cores and a 2 GB GDDR5 memory and according to reports, it would be priced around 360 Euros which pits the price around the previously suggested $399-$499 price range. This is the price for non-overclocked variants, custom board and overclocked models are likely to cost more.Expect to see custom models by Computex 2013 during which NVIDIA is expected to announce a third GeForce 700 series GPU known as GeForce GTX 760 Ti which replaces the 660 Ti but is a rebrand of the GTX 670 with faster clocks. Its performance is expected marginally better than the GeForce GTX 680 while it would perform just slightly under the AMD Radeon HD 7970 GHz as revealed yesterday. Possibility remains that a few GeForce GTX 680 boards can be flashed into a GeForce GTX 770, more details here.