Just moments ago, a reddit user posted a BIOS which allows used to flash their GTX 680 into the upcoming GeForce GTX 770. There's a second update on the GeForce GTX 770 straight from Semiaccurate who have somehow gotten a Radeon HD 7970 GHz slide which compares its performance against the GTX 770.

If we round up the specifications revealed so far, we would know that the GeForce GTX 770 is based on the GK104-425 A2 core which brings nothing new to the table compared to the GK104-400 A2 used on the GTX GeForce 680. The GeForce GTX 770 comes with 1536 cores and 2 GB of GDDR5 memory. The clock speeds for GeForce GTX 770 are pushed to the boundraies with the core running at 1059 MHz and turbos all the way upto 1125 MHz. The GDDR5 memory which runs across a 256-bit interface has been clocked to an impressive 7 GHz effective speed. The GPU has a voltage limit of 1150 mV which would allow additional overclocking headroom.

We still don't know how AMD made a whole performance chart for the GeForce GTX 770 days before the launch of the GPU itself. It is possible that AMD might have had taken a hint about the GPU from the specs that had been circulating the web and knowing that it would be nothing more than an overclocked GeForce GTX 770 went ahead to make an actual chart out of it to advertise their flagship Radeon HD 7970 GHz. Nevertheless from the chart we can clearly see that the GTX 770 matches the HD 7970 GHz in most of the titles while loosing in Dirt: Showdown by 15% and 10% in Tomb Raider. We do know both of these games are optimized for AMD hardware. Skyrim is the only game where the GTX 770 shows positive performance numbers with a 4% increase.

AMD might be upto something at this moment, they might have a new gaming bundle for release for which they are preparing these performance slides and advertising their HD 7970 GHz edition. On the other hand, we know this much that AMD won't have anything under their belt to tackle the GTX 780 which would feature a GK110 core as detailed here. On a side note, AMD does have something under their sleeves as they mentioned the following on their Facebook page: 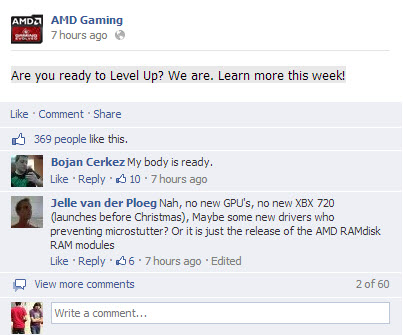