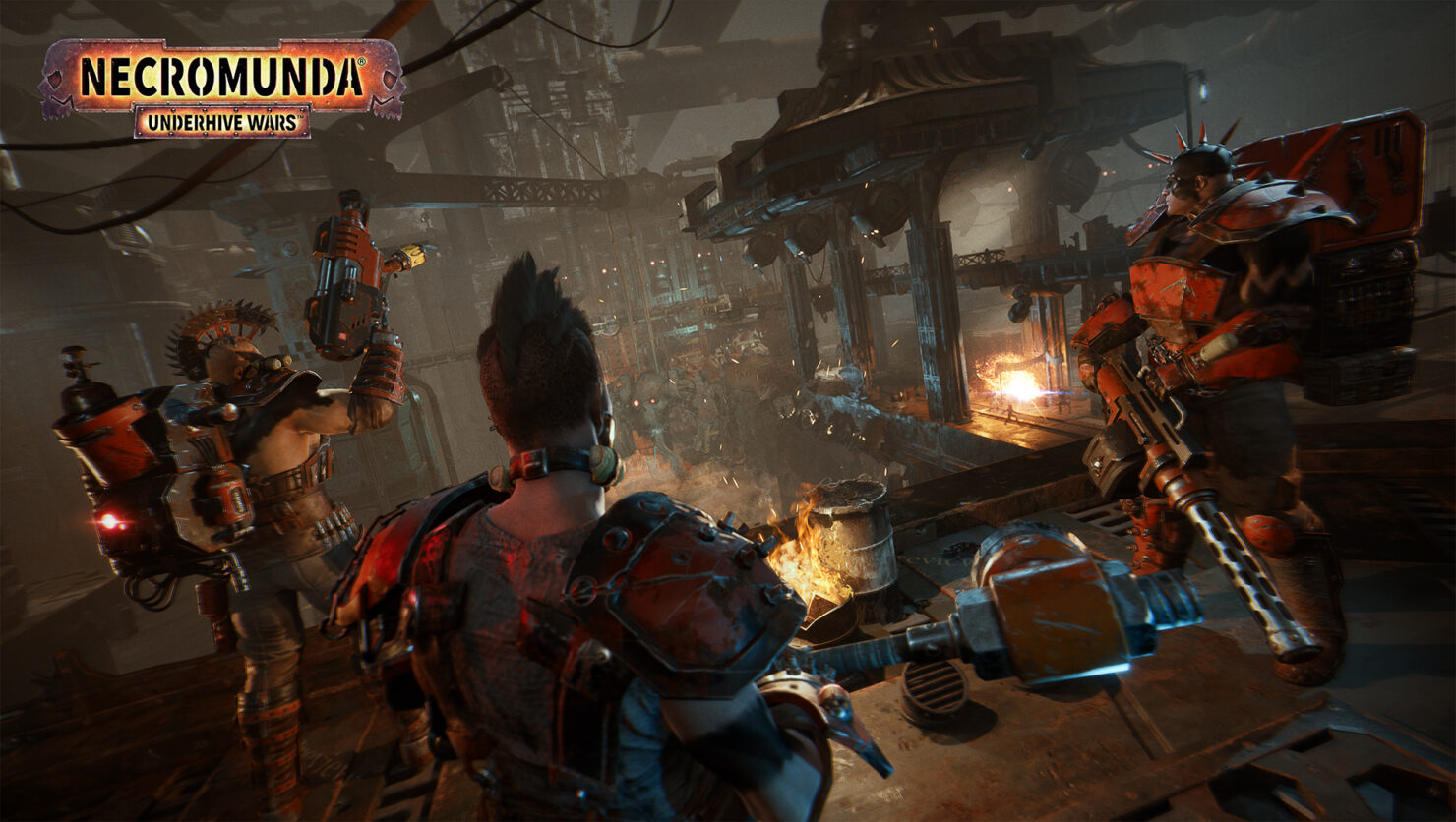 Over three years and a half after the game announcement, Necromunda: Underhive Wars is finally about to be released. Due tomorrow on PC, PlayStation 4 and Xbox One, the turn-based strategy game is based upon the skirmish tabletop war game set in the Warhammer 40K universe.

Interestingly, the game's developer previously worked on Mordheim: City of the Damned, another turn-based strategy game based upon the eponymous skirmish tabletop wargame set in the Warhammer fantasy universe.

Ahead of the release, we were able to interview Rogue Factor to learn what they decided to change for Necromunda: Underhive Wars. We also got an exclusive sneak peek at the official soundtrack, made by Stéphane Primeau (who also composed the OST of Mordheim: City of Damned) of Laced Records. The soundtrack will be made available for purchase through all streaming services and even Steam.

Coming from Mordheim to Necromunda, what were you able to transfer from that project to this one and what did you have to change in your approach?

Our team has kept a similar approach for the development of this new project, although Necromunda: Underhive Wars’ design and development cornerstones have put a lot more emphasis on enhancing usability and player freedom throughout, while also benefiting from a brand new game engine (Unreal Engine 4), a bigger team and scope, as well as all of Rogue Factor’s learning experiences from Mordheim: City of the Damned.

Necromunda: Underhive Wars remains a turn-based game, of course, but we really wanted to increase the sense of action and immersion by making a few core changes to the formula. On their turn, for example, players no longer play all of their characters like they did in Mordheim. Rather, they each pick one fighter from their participating crew, and these then play in an order determined by their initiative value. When every gang (player or AI-controlled) has played a fighter, a new turn begins with a different character from each gang.

Once all characters have been activated, a new round begins and the cycle of turns begins anew. This means that players will never have long to wait before regaining control of another character and that they’ll be able to better react to what their opponents are doing, further reinforcing the game’s tactical focus. Furthermore, we’ve also reduced the maximum number of fighters any gang can field at once on a map to 5 (what we call the active crew), although up to 4 gangs can be present in the same engagement (bringing the total number of participating fighters to 20, which is the same as it was in Mordheim). All in all, these changes will ensure that there will be less waiting, and more playing for everyone involved.

Missions will also tend to be shorter than in Mordheim, as we want a typical Underhive Wars session to be composed of multiple battle scenarios, separated by short periods of gang management and upgrades, rather than of single missions that can drag on in time… We’ve also reworked the way unit movement and action points are handled, so they’re both more accessible and user-friendly than before, without taking away any of the depth and complexity our players can expect. The same goes for the customization and fighter management systems, and a lot more besides... these are but a few examples!

How close is Necromunda: Underhive Wars to the tabletop game and what did you have to change specifically to make it work as a videogame?

We’ve indeed adapted quite a few things in order to bring a fresh twist to this first digital
version - many of them based on our experience with Mordheim - but without ever losing
track of the original essence of the game.

Throughout development, we’ve been blessed by a close and continued working relationship
with our partners from Games Workshop, who have been extremely generous with their
contributions to the game’s multiple moving parts - both in terms of game design, artistic
direction, lore elements and more. While fans of the iconic tabletop game will find many things similar to what they already know, among which the sprawling vertical environments serving as both narrative, visual and mechanical backdrops to the expected brutal gang warfare, some parts of this adaptation are completely new.

For example, we’ve introduced the notion of fighter careers, which can be compared to character classes in traditional RPGs, each bringing their own set of skills (active, passive and signature), as well as unique perks. We’ve got 5 in total (plus a leader career, which can be added on top of any other), and they’ll ensure that players can recruit and “build” fighters that serve a wide variety of different-yet-complementary battlefield roles. In order to succeed, you’ll have to think not only about each individual fighter, but also about your gang as a whole, and how the units on your roster can synergize with one another. Here also, our partners from Games Workshop have been instrumental in helping us define these careers and bring them to the (digital)tabletop in a meaningful way.

How long will the campaign be on average?

Necromunda: Underhive Wars’ explosive story campaign comprises 15 missions, and should
take around 12-15 hours to complete. Written by Necromunda veteran Andy Chambers, it will
take players on a perilous journey through the deepest parts of the Underhive, as 3 infamous
gangs (Escher, Orlock and Goliath) vie for the discovery and control of a powerful and long-
forgotten artifact.

The game’s story campaign features more than an hour of fully voiced cinematics and also serves as a complete in-game tutorial, teaching new players everything they need to know in order to survive and overcome the perils of the underhive! That’s not all - Necromunda: Underhive Wars also features another single player mode, called Operations. This one offers seemingly infinite replayability, as players can create their own custom gangs and embark on increasingly difficult (and rewarding) sets of 6-10 missions for the control of resources held in different sectors.

The gangs you create in Operations can then seamlessly be ported to the game’s varied multiplayer modes, and vice versa!

Can you shed some light on how artifacts will work in Necromunda: Underhive Wars?

The artifacts in question were first evoked in one of our previous DevBlog entries. They play an important role in the story campaign, and also serve as coveted (and very valuable) resources in Operations.

What are your plans to release more gangs, in terms of business model (free or paid) and timetable?

It’s still too early for us to reveal an official post-launch roadmap, but it’s safe to say that the Necromunda universe is a very broad one in terms of possibilities...

Will you add genestealer cults to the game? What about brutes and psykers?

Please refer to the answer above. 🙂

Is there going to be mod support at some point? What about cross-play for multiplayer?

For technical reasons, Necromunda: Underhive Wars will not be supporting community mods or multiplayer cross-play.

What do you think of the next-generation consoles? What's the most exciting aspect of their hardware and software you've seen so far?

Without pointing to anything in particular, it’s safe to say that the next generational leap (in terms of both engines and hardware) will definitely have huge impacts on both developers and gamers over the next few years. The various technical demos and specs we’ve been seeing in the past few months all seem to point to a bright future for gaming indeed, with things we could only dream about a few years ago suddenly becoming tangible.

Do you have any plans to enhance the game for next-gen consoles? If so, how?

We’ll see. For now, our whole team is fully concentrated on the game’s upcoming worldwide launch on PC (Steam), Xbox One and PlayStation 4 on September 8.