Mordheim: City of the Damned

Before sitting down with Mordheim: City of the Damned, I had no idea it was connected to Warhammer. The original tabletop game, from way back in 1999, was designed as a new take on Games Workshop’s wargame giant, moving the player from commanding an army to managing a single unit of soldiers, referred to as a warband. Mordheim: City of the Damned faithfully adapts this Warhammer variant into a hardcore strategy game for PC and now PS4 and Xbox One.

The game is set in the city of Mordheim some 500 years before the present day Warhammer timeline. After a comet struck the poor district of the city and scattered valuable wrydstones (gems infused with Chaos magic) throughout the ruins, Mordheim fell into a civil war as the various resident factions, along with mercenary groups traveling from afar, fought for control of the city and the stones.

You command one of these factions - your warband - and balance the lives of your soldiers against the amassing of wyrdstones, all the while clashing with the warbands of the other factions. There are four factions to choose from, each with their own strengths and weaknesses that determine their playstyle. The choices are the human mercenaries who most strongly resemble a standard fantasy military, the spell-slinging and God-loving monks of the Sisters of Sigmar, the stealthy Scaven rats who specialize in assassination, and the Cult of the Possessed whose ranks are filled with mutants and degenerates. And if that wasn’t already enough, the Witch Hunter DLC faction is available for purchase from launch.

I’ll start with a few positives. You can’t complain that Mordheim doesn’t give you enough stats. Outside of battles, you have the chance to get a right good sense of the strengths and weaknesses of each of your units, as well as equipped weapons and active skills. On the battlefield, the UI is full of information on hit chances, stat buffs/debuffs, damage output and the like. While at first the screen feels a little cluttered, a few button presses hide a lot of the less important information.

I also enjoyed the way the campaign was laid out. Paying your scouts reveals new procedurally generated missions in which you are tasked with wiping out an enemy team (or force them to retreat). These missions will also have side-objectives, guiding you to collect a number of chunks of wyrdstone before finishing the enemy. The mission ends as soon as the enemy exits the field, so you’d best race to tick those boxes before the fighting reaches its peak.

Mordheim also presents a feature that is often missing from these army-building strategy games in that you have to actually pay your soldiers to keep fighting. This can raise dilemmas during missions where you may begin to feel overwhelmed by the enemy, but you know that if you don’t return to your warband with enough cash, your best soldiers could refuse to fight. It’s at these moments that I thought that maybe I would start to really click with Mordheim, but it doesn’t take long for my issues to be brought forth.

Before you even select your first mission though, a popup pointedly remarks that this is a hardcore strategy game, and I have to agree. Just taking a quick scan through the tutorials will show you how many options you have on the field, how many stats you can check, and how many objectives you have to fulfill. Then once you’ve made it to the field and face your first enemies, Mordheim shows you how relentless it’s difficulty and complexity are, and how quickly they start to get in the way of the fun. More than anything, you need smart strategising to fight against the systems the game is built of rather than the actual enemies.

I personally compare playing Mordheim: City of the Damned to “reverse dungeon mastering”, and I’ll try to explain what I mean by that. Every soldier on the field is controlled individually from a third person perspective, with Strategy (movement) and Offense points limiting what they can do each turn, and they have an Initiation stat that determines where they sit on the turn ladder. Each of your soldiers is unique: you can name them, change their look, write biographies for them, and you equip them with weapons and armor before battle - it’s like setting up a Dungeons & Dragons character, but you control 12 of them at once.

There are too many systems getting in the way of Mordheim being an enjoyable experience. Even once you get into battle, dice rolls are determining whether you can hop off a ledge with hurting yourself or you’re rolling for Perception or Terror checks. Allies can’t stand too close together in combat so you frequently end up with all your soldiers stuck as one enemy stands in a doorway. There’s even a squad morale system that, if it falls too low all of a sudden, you might fail a check that means you instantly fail a mission - something as simple as a single enemy attack at the wrong time could mean mission failure. You can outnumber the enemy, and still lose. There’s being “hardcore”, and then there’s just being ridiculous.

Realistically, I don’t think Mordheim: City of the Damned is a fitting game for a console release, and it certainly doesn’t seem ready. The thing about “hardcore” strategy games is they are typically found on PC, as a keyboard with 100+ individual buttons can offer you a much denser control scheme and more tactical freedom. Limiting it to 12 buttons left me feeling like I was lost in menus, and at one point I had to restart the game because something I pressed by accident (I discovered later it was the right button on the D-Pad) stopped me from accessing all other controls because I could only scroll up and down the battle log.

Furthermore, at least on PlayStation 4 Mordheim: City of the Damned is a game that won’t really catch you eye. The first thing you will notice is how drab and murky the world looks - a fog does often hang over the battlefields but I’m referring to how every texture, be it the walls, the floors or on characters, looks smudged. The framerate too struggles to remain stable and stutters frequently.

The third-person camera perspective makes me think that Mordheim wants to be seen like a Dragon Age or Knights of the Old Republic. Unfortunately, the combat is too bogged down by the myriad of combat options and by the amount of time it takes to complete simple objectives (even just killing a single enemy can take about four turns) that it’s impossible to gain any satisfaction.

Dubbing itself as a “hardcore” title seems more of a defense against claims any that the game is too dense and too slow, and Mordheim: City of the Damned certainly doesn’t measure up against its competition on the console platforms. If you’re the kind of person who finds the likes of The Banner Saga and XCOM 2 lacking and too easy then you may want to give Mordheim a look, but realistically I’d say you’re best off with the PC version.

Reviewed on PlayStation 4 (code provided by the publisher). Also available on PC and Xbox One. 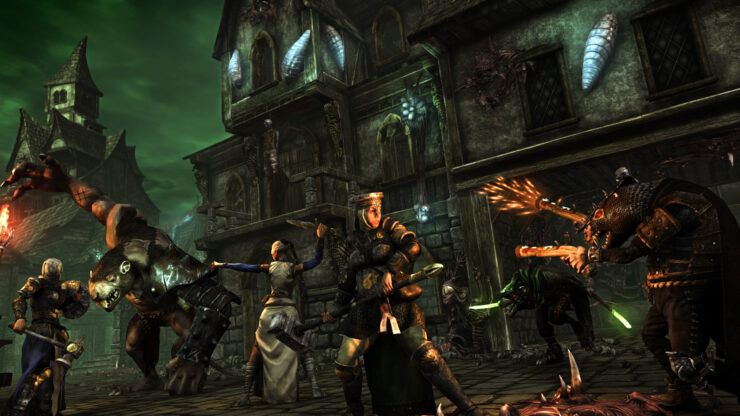 I found myself wishing that something would appear to redeem Mordheim: City of the Damned, but as it began to feel like every action in the game was taking a few agonizing seconds too long, I realised that I’d lost hope in much the same way as the residents of the eponymous city. Mordheim isn’t a dangerous place, it’s just a bit dull.