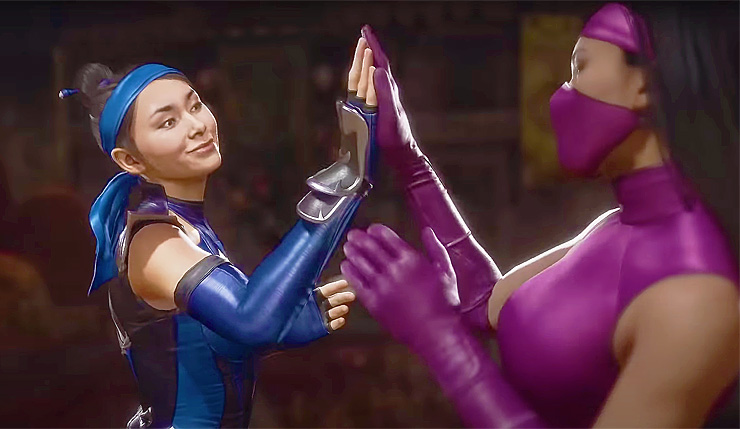 NetherRealm recently announced they’re launching a new free update alongside the upcoming Mortal Kombat 11: Aftermath expansion, which will include the return of…Friendships! These goofy, upbeat alternatives to Fatalities have been missing in action since Mortal Kombat 3, but MK11 is making up for lost time with an extra dose of ridiculousness. The new MK11 Friendships trailer includes wonderful sights such as Sub-Zero pedaling his own custom ice cream cart, Kitana and Mileena playing pattycake, a disco Liu Kang, and a pretty mean sax solo from Jax. You can check it all out, below.

Mortal Kombat 11: Aftermath continues the game’s time-travelling story, and introduces three new fighters – Fujin, Sheeva, and Robocop. As mentioned, the expansion launches alongside a free update, which includes the addition of Friendships and more…

The new Mortal Kombat 11 Friendships trailer shows off various fighters performing their own lighthearted finishing move, from Jade bursting open a festive, candy-filled piñata with her staff and Liu Kang disco dancing on an illuminated LED floor, to Sindel toasting with a glass of wine and Jax treating players to a jazz saxophone session, along with plenty of other surpising Friendships for players to discover.

Friendships will be available on May 26 as part of a free content update for all MK11 players, in conjunction with the digital-first release of the new Mortal Kombat 11: Aftermath expansion. The free update will also give players access to Stage Fatalities and the new Dead Pool, Soul Chamber, Kronika’s Keep, and RetroKade Stages.

Mortal Kombat 11: Aftermath will set you back $40, or if you haven’t jumped into MK11 yet, you can get the Aftermath Collection, which includes the original game, Aftermath expansion, and all previous DLC for $60. Pre-orders are open now.

Mortal Kombat 11 is available now on PC, Xbox One, PS4, and Nintendo Switch. Aftermath and the free update will launch on May 26.