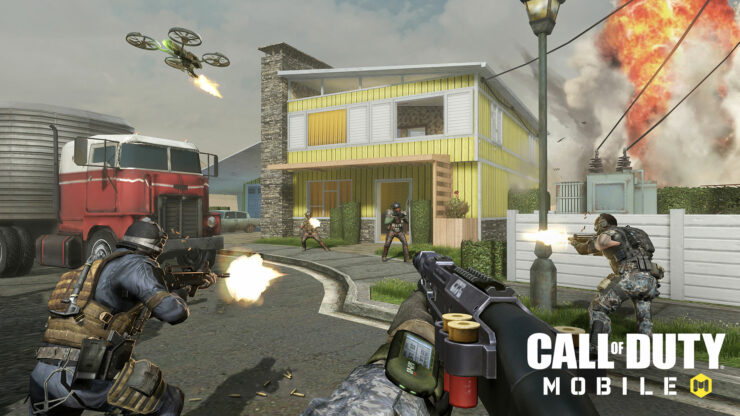 Earlier this year, Activision announced that they'd bring Call of Duty to mobile devices worldwide in partnership with Tencent. Not much was known about it at the time, and today, the company has shed some light on Call of Duty Mobile. The title is now at the regional beta testing phase. The first closed beta is beginning this week in India, with regional tests starting soon in Australia and then following to other territories over the coming months.

Activision posted some screenshots on their official blog which show a variety of control options that let you customize the toggles like sensitivity, gyroscope aiming, field of vision, and sprinting. For people unfamiliar with the mobile FPS genre, there's a Simple Mode, which auto-fires your weapon. More experienced players can opt for Advanced Mode that uses manual firing along with HUD customizations and even 17 sliders for aiming sensitivity.

Much like its PC/console version, there is an option to select up to three Scorestreak equipment like the Recon Car, Air Supply Drop, Missile Strike, Drone, and Sentry Gun. Additionally, you'll be prompted to pick a Primary and a Secondary weapon, each with its own optics and attachments, grenades, and perks. Your five loadout slots can be one of several characters from Call of Duty history, including Alex Mason, Soap MacTavish, and Ghost Riley.

In addition to your Primary and Secondary weapon, there’s a choice of an explosive grenade or tactical grenade to lob, and a devastating weapon Skill. These work similarly to the Specialist Weapons in Call of Duty®: Black Ops 4; accessible after a timer countdown, they provide a brutally impressive method of ruining a rival’s day. Current Skills include the Purifier (flamethrower), War Machine (grenade launcher), Death Machine (minigun), Transform Shield (deformable shield), Sparrow (bow), and Tempest (electrical bolt rifle).

Complete your look with up to three Perks to choose from, with each perk slot offering a distinct set of ability choices, such as “Fast Recover” (a better health recovery rate), “Ghost” (enemy UAVs can’t reveal your position), and “Demo Expert” (which increases the damage of explosives).

The game is expected to launch with five modes: Free-For-All, Frontline, Team Deathmatch, Hardpoint, and Domination. It will also bring back original Call of Duty maps such as Crossfire, Standoff, Crash, Killhouse, and Firing Range. You can pre-register through the official site using this link.