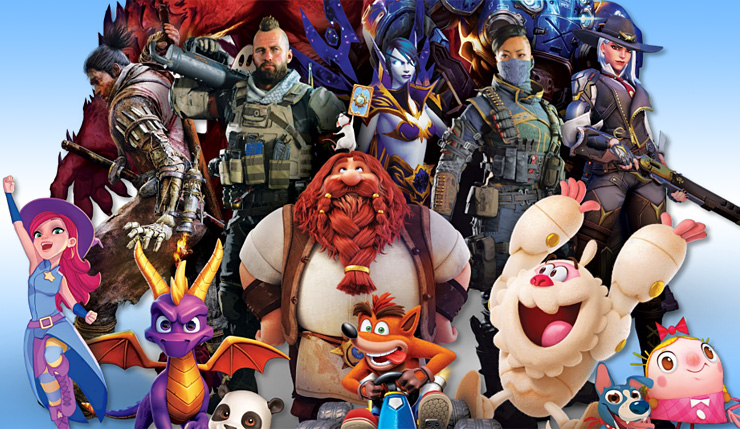 Activision Blizzard (NASDAQ:ATVI) have released their earnings for the quarter ending September 30, 2019, and while they’re down compared to Q3 2018, they still delivered above expectations. The mega publisher delivered $1.28 billion in revenue during Q3, down from $1.51 billion a year ago, but above the company’s outlook of $1.11 billion. Earnings per share were $0.26, above the $0.23 predicted by financial analysts. As of the writing of this article, the company’s stock has dropped 3 percent in after-hours trading.

The only major part of Activision Blizzard’s business that was up year-on-year was Candy Crush, which continued its long streak as the top-grossing mobile game in North America and doubled its advertising revenue year-on-year. Revenue from Acti-Blizz’s King mobile gaming segment was down slightly year-on-year, but thanks to the success of Candy Crush it only dropped $8 million (the decline was chalked up to several smaller titles winding down).

As has been the case for a while, Blizzard’s business was down significantly year-on-year, with Q3 revenue dropping $241 million compared to 2018. That said, the bleeding wasn’t as bad as it could have been due to the release of World of Warcraft Classic, which drove the largest single-quarter increase in WoW subscriptions in the venerable MMORPG’s history. Classic still brought in less money than last year’s Battle of Azeroth expansion, as it’s being offered as a free download to all WoW subscribers, but in terms of shoring up their subscriber base, Classic was a big success and one of the main reasons Acti-Blizz managed to beat their Q3 revenue outlook.

A Hush Around Hong Kong

One subject conspicuously not mentioned at all in the company’s earnings report or during the subsequent investor’s call was the controversy over Blizzard banning Hearthstone players for expressing support for the pro-democracy protests in Hong Kong. This was obviously an ugly black eye for Activision Blizzard, but they seem to be taking the stance that, while it was terrible PR, the story was largely immaterial to their bottom line. Whether that remains the case long term, remains to be seen. Will the company kowtowing to Chinese authorities have a chilling effect on their esports efforts? Will consumer boycotts actually materialize? Or will access to the Chinese market be worth it in the end? Valid questions, but right now, Acti-Blizz brass don’t seem willing to discuss any of them.

Pumping up the Pipeline

In the short term, there’s plenty of reason to be optimistic about Activision Blizzard’s business. Thus far in Q4 they’ve already released Call of Duty: Mobile and Call of Duty: Modern Warfare, which generated over $600 million in its first three days on sale. Blizzard’s release of Warcraft III: Reforged in December should further pad the Q4 numbers.

2020 and beyond is a less certain prospect – Blizzard recently announced a raft of new titles, including Overwatch 2 and Diablo IV, but most of those projects are still multiple years away. On the Activision side, very little has been announced. Of course a new Call of Duty, developed by Treyarch, is on the way, but there are rumors the game’s development is mired in turmoil. And what about the transition to new consoles? Is Activision prepared to take full advantage of the next generation? For his part, Activision Blizzard CEO Bobby Kotick insists the company’s pipeline issues are being dealt with and a strong lineup of content from big franchises is on the way…

Recent launches have enabled significant growth in the size of our audiences for our Call of Duty and World of Warcraft franchises. […] With a strong content pipeline and momentum in mobile, esports and advertising, we are confident we will remain a leader in connecting and engaging the world through epic entertainment.

Again, there’s nothing to worry about in the short term – Activision Blizzard has raised their outlook for FY2019 from $6.19 billion to $6.32 billion – but will the company’s efforts to consolidate and increase the flow of new content pay off? Will their move into the Chinese market continue to cause headaches? Will they remain competitive as Google and other giants enter the market? We'll just have to wait and see.