New information that has just appeared reveals interesting details about the upcoming update of Windows 8.1 and the anxiously awaited Windows 9. ZDNet tells us that the upcoming update 2 (referred to as August Update) will not be a compulsory update for the operating system and will be the last major update for Windows 8.1. Meaning the next thing we see is Windows 9 finally landing. 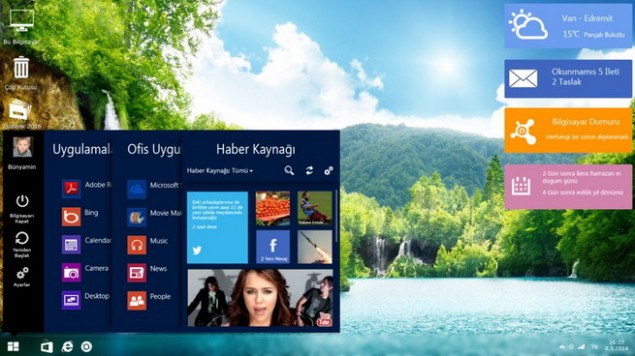 Fan Made Concept of Windows 9.

Windows 9 May be Closer than Expected - August Update to be the last Windows 8.1 Update

Interestingly, Update 1 had been tagged as a compulsory update while as Update 2 wont be. Infact, it will be a relatively minor update and will simply be referred to, as the August Update. Now the source says that there won't be an Update 3. The only eventuality in which an update 3 is released is one in which Microsoft decides to do so just for the sake of continuity and establishing a 'serviceability' pattern.  In all probability however, the source alleges, we will not be seeing the Update 3 at all. Infact the next stop is Windows 9 with all the goodness of the new start menu that we have been waiting so long for.

The August Update is coming on August 12 and will land dead center on Patch Tuesday. It would appear that Microsoft will not be making a very big deal out of this particular update and it wont contain any big feature changes. Though some design adjustments will be present, there is a reason Microsoft will be tagging it as non-compulsory.  Also it will probably be pushed just as another Monthly update. Apparently, all the folks over at Microsoft will be putting their energy behind Windows Threshold/Windows 9 to make sure it is completely stream lined and bug free at launch. The source indicates that Microsoft might even cut Windows XP, Vista and especially Windows 7 Users (50% of the entire user base I might add) some kind of deal by giving them a free upgrade to Windows 9 directly. All of this, just to get the somewhat stagnant Windows loyalists to get a move on. I have a feeling however, that the only real factor in triggering a migration will be if Windows 9 truly hits home.