Microsoft is going to introduce Windows Threshold, also being dubbed as Windows 9 on September 30th this year. Quite a few details have emerged over the past weeks about this platform. According to a couple of reports, Windows Threshold is expected to get a new Modern UI 2.0 with Start Screen being disabled in desktop and the mobile version not having a desktop at all.

Well, it looks like the folks over at Microsoft China are eager to discuss Windows 9 with all of us. In a post on Microsoft Weibo today, Microsoft China asked it's followers that "Microsoft’s latest OS Windows 9 is coming soon, do you think the start menu at the left bottom will make a come back?"

A Windows 9 logo accompanied the post but has been taken down as of now. The same logo was being touted as a wallpaper last year. Cnbeta however spotted it before it was taken down and you can take a look at it below. 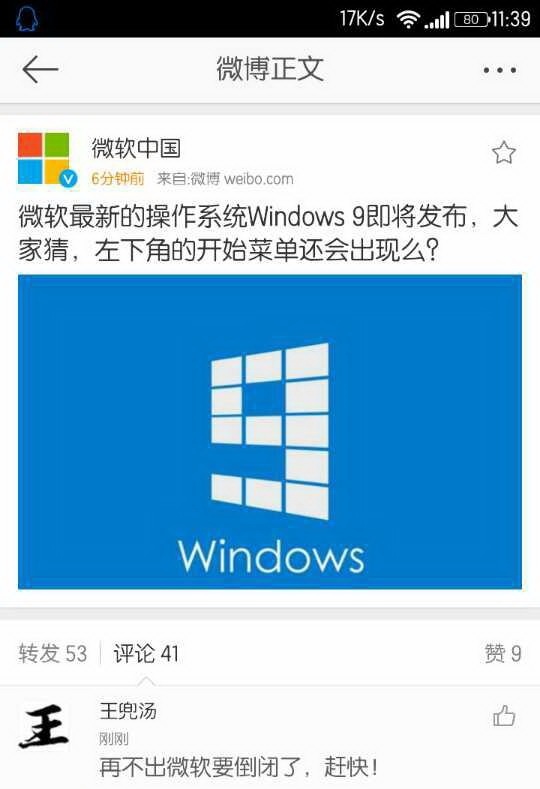 Microsoft Teases Windows 9 In China - Takes Down Post Soon After

This isn't the first time screenshots of Windows 9 have hit the internet though. Two months back several alleged screenshots of the upcoming OS surfaced. These showed a significant shift back towards Windows 7 due to the massive uproar caused by it's fans.

Windows 9 allegedly has complete DirectX 12 support and Microsoft's expected to make several changes to the platform. Metro Apps are now going to be a part of the left side of the screen. In addition, Metro Apps can be completely turned off in Windows 9, in a move to appease Windows 7 fans.

Windows 9 is expected to be with us in 2015 and Microsoft is expected to distribute a Technology Preview of the OS to developers by early October. Guess we'll have to stick to more leaks and accidental previews until then.