[Rumor] Windows 9 is one of the more discussed iterations of operating systems out there. A new report by Winbeta reveals that Windows 9 also known as 'Threshold' will be getting a completely new Modern UI 2.0 with a new feature called Interactive Tiles. Now because I am not very familiar with OS and mobile related sources, I am going to be tagging this one as a Rumor, even though this report looks pretty much legit to me. 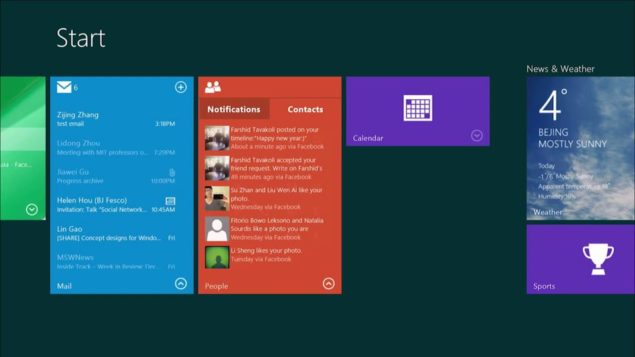 Now Windows 9 is slated for a launch in 2015 according to latest reports with a beta coming in September this year. The Start Screen has been a thorn in the side of hardcore Windows users for quite a long time and is one of the multiple reasons why 50% of the Windows sector is sticking to Windows 7. Previous reports have indicated that Microsoft  will be disabling the Start Screen by default in desktops to appease the aforementioned crowd. However, I think the same users might be open to a completely redesigned start screen. One that actually has useful features like live interactive tiles for your email etc.

You can see the Live Interactive Panel screenshot above, courtesy of winbeta once again. Now the source goes on to state that the Start Screen will not be available in Desktop version and the Mobile version won't have desktop. Thats a very interesting statement because it means that Microsoft will be able to pursue its Unification dream without changing the aesthetics that old users love. For devices like the Surface Pro 3.0 you can always enable the Start Menu interactive start- screen-thing. The removal of the desktop will feature mostly in Windows RT devices. Interestingly Win32 applications are being replaced by Modern UI alternatives, so Microsoft is actually going through a reboot of the desktop-less windows for tablet devices. Windows 'Threshold' is shaping up to be either a glowing success or another failure by the looks of things. However, if you follow the old wives (programmers?) tale of the failure-success pattern of windows, Windows 9 is slated to be the platform Win7 users finally upgrade to.