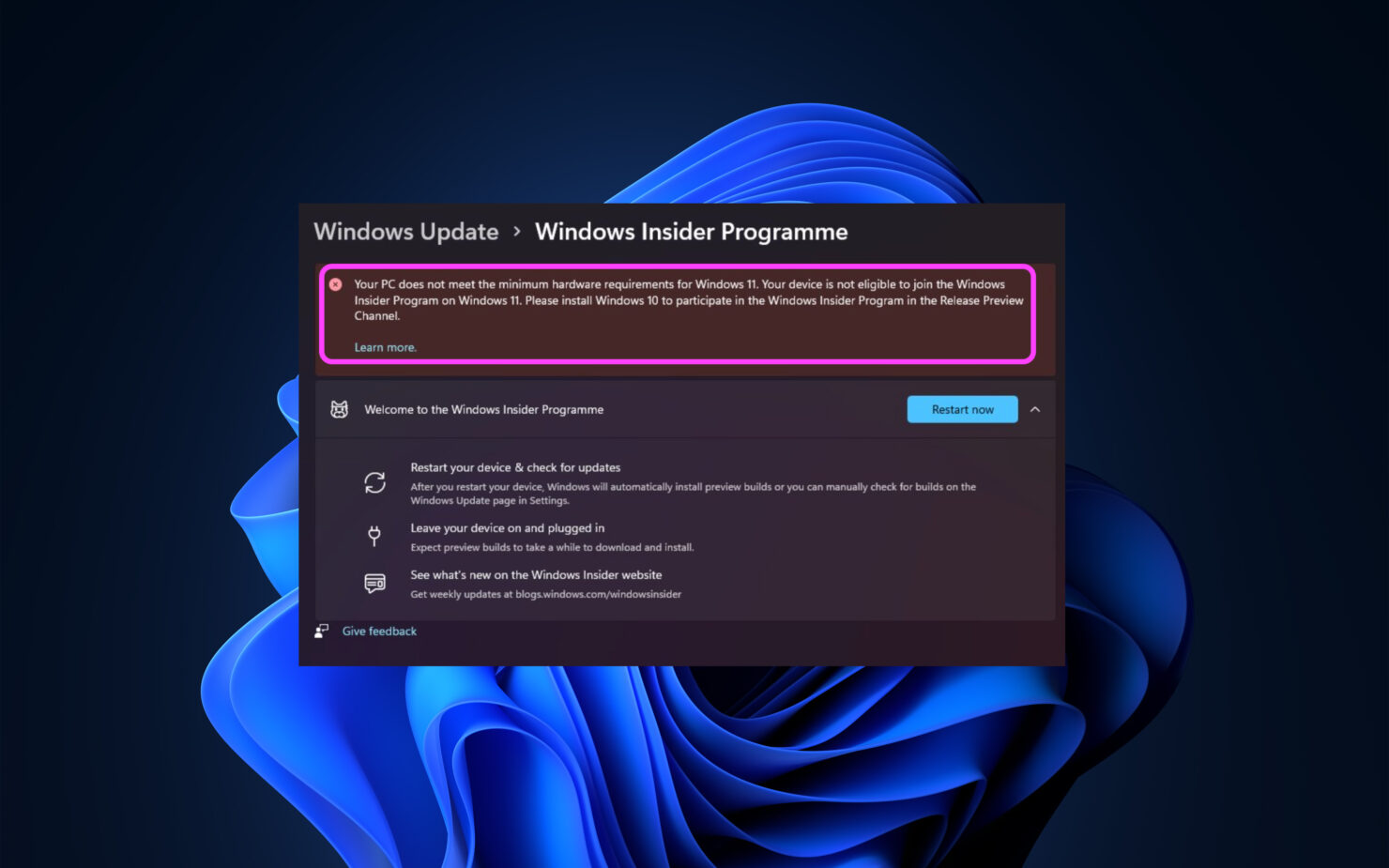 After announcing the official release date for Windows 11 yesterday, Microsoft started pushing unsupported PCs running the Insider builds of Windows 11 back to Windows 10. The Windows maker had allowed some of the unsupported devices to run and test the new operating system. However, that ends now as you will see a message alerting you to reinstall Windows 10 if your device doesn't meet the minimum specs requirements of Windows 11.

Insiders in both the Dev and Beta Channels have reported seeing this warning.

Microsoft had already warned Windows 11 Insiders that this would happen

The Windows maker had warned this would happen back in June when it initially announced the next generation of Windows.

"PCs will be allowed to preview Windows 11 updates only via flighting until General Availability," the company had said about allowing devices to test Windows 11 builds that didn't meet the minimum hardware requirements in a June 24 blog post. "PCs will then need to take action to go back to Windows 10 and will not be eligible for future Windows 11 Preview builds."

Microsoft had added that "all Windows Insiders who have already been installing builds from the Dev Channel on their PCs up through June 24, 2021, will be allowed to continue installing Windows 11 Insider Preview builds even if their PC does not meet the minimum hardware requirements."

Once Windows 11 is generally available, these PCs will be opted out of flighting and will not be able to receive future Windows 11 Insider Preview builds. These PCs must clean install back to Windows 10 with the media (ISOs) that we provide and can then join the Release Preview Channel to preview Windows 10 updates.

The entire Windows 11 upgrade process has been confusing, even though the official public release hasn't even begun. For one, the company allowed some unsupported devices to test Windows 11, calling these "limited exceptions," giving some users hope that the company might extend these exceptions, as has been the case in the past.

However, it seems Microsoft is maintaining hard boundaries with Windows 11 release. The Windows maker has also warned that devices trying to work around this by installing ISO files won't receive any future updates, potentially putting those devices at risk. In a way, it appears that the company is extremely confident about its new desktop operating system or is at least signaling so. With the Windows 10 release, Microsoft made many exceptions and extended several deadlines. But, with Windows 11, if you want the new OS, you might have to upgrade if your current device doesn't meet the minimum hardware requirements.