Metal Gear Solid V: The Phantom Pain, the latest entry of the series created by Hideo Kojima, isn't apparently going to receive any story related extra content, but Konami has been trying to keep players engaged by adding new weapons and items which can be obtained by playing FOB missions. Plenty of these additional items have been made available in the past few weeks and some of the future FOB rewards have been recently discovered in the game's files. 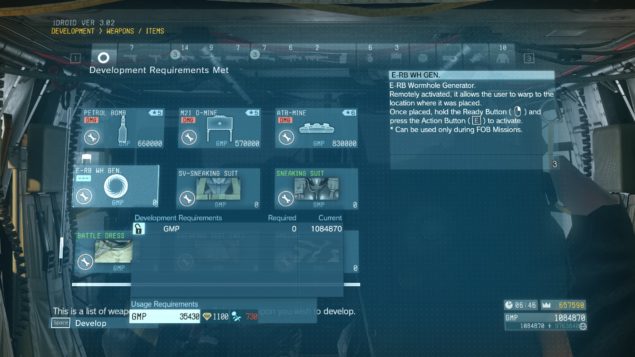 According to what some players have discovered, among the future Metal Gear Solid V: The Phantom Pain FOB rewards will be new uniforms like the Tselinoyarsk and Iron Blue uniforms, weapons like the Arms Material Alpha 114 Riot Pistol and the Wormhole Generator, which will allow the user to warp to the location it was placed and more. You can check out some screenshots showcasing the new content right below.

As mentioned above, Konami has been trying to keep Metal Gear Solid V: The Phantom Pain players engaged with new FOB events. Last week the Japanese company launched the first events of the year, re-introducing the Mosquito's Legacy event, which is perfect to learn how to handle FOB missions without fear of retaliation, and the Sleep Gas Grenade upgrade event, which allows players to boost their PF's Offensive and Defensive capability if development of the Grade 7 Sleep Grenade has been completed.

Metal Gear Solid V: The Phantom Pain has been in development for quite some time and some of its main themes have been in place ever since 2011. A few days ago, it's been revealed that Hideo Kojima talked about the Mody Dick references with the Metal Gear Solid V: The Phantom Pain novelization author back in 2011. It's also been revealed that Ishmael's identity was different than in the final game, with the man actually representing America's view of justice in the game's original vision.

Metal Gear Solid V: The Phantom Pain is now available in all regions on PlayStation 3, PlayStation 4, Xbox 360, Xbox One and PC. The online component of the game, Metal Gear Online, will finally be launched on PC this month.