Considered one of the titans of China's mobile technology, Meizu has finally launched its power-packed MX4 Pro flagship smartphone. Meizu MX4 Pro is a 5.5-inches Quad HD display smartphone powered by Samsung's 20nm manufactured Exynos 5430 chipset. The device flaunts a 20.7-megapixel camera with a fingerprint sensor coming under the features' list too.

Meizu MX4 Pro carries an Exynos 5430 SoC under the hood having four Cortex-A15 cores running at 2.0GHz and anther four Cortex-A7 cores running at 1.5GHz for heavy and lightweight tasks, respectively. We have already shared with you the big.LITTLE technology that this SoC uses to have all the eight cores working in conjunction for better performance, and more importantly, increased battery life. Mali T628 MP6/600MHz tackles the graphics of the phablet smartphones.

The 5.5-inch display is a JDI-made panel with Gorilla Glass 3 on top it with 1536 x 2560 pixels resolution and 546ppi pixel density. This actually makes MX4 Pro the most pixel-dense smartphone in the world achieving a brightness of 450 nits. 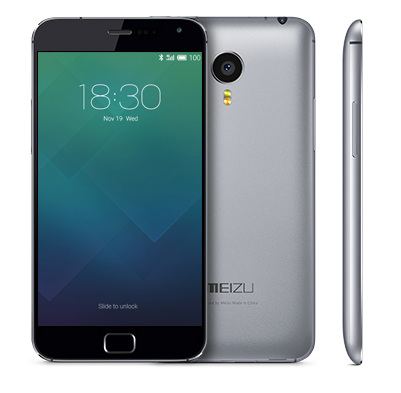 Battery and storage on MX4 Pro:

Like many other Android smartphones, MX4 Pro is also powered by a 3GB of RAM. Usual storage options of 16, 32, and 64GB are available. Meizu MX4 Pro will be powered by a strong 3,350mAh battery.

Smartphone is powered by Android 4.4.4 KitKat with Meizu's own FlymeOS atop and will be sold for $410 in China with grey, sand yellow, and white being the color options.

While the device is packed with all the industry-leading features and hardware components, Meizu has also fitted in a fingerprint sensor in its latest smartphone. mTouch - or so Meizu is calling its fingerprint scanner - is covered by sapphire glass and offers the fastest input at 0.5 seconds. mTouch has 508ppi sensitivity so that you could get the scanner working even if your finger's wet or a little messy.