When you think of a Chinese made smartphone, the natural name that would come to mind is OnePlus (read our review of the 5T). However, other companies have really pushed to get their brand recognised internationally. Huawei, Vivo, Oppo, Xiaomi and of course Meizu all have a place in the market. This leaves little space for OUKITEL unless they can find and fill their niche. Now, what about the OUKITEL K7?

In this case, it's the battery. Certain OUKITEL phones have big batteries, huge batteries. That's their USP. In the case of the K7, the battery is a whopping 10,000mAH. This actually makes the phone somewhat difficult to review on a short timescale. I've had the phone now around two weeks now. It's the only way I've been able to test the battery to its potential, and I've got to say - I'm impressed.

Before moving on with the review, here are some of the key hardware specs you should know:

This isn't a phone that will easily sit in your shirt pocket, that's for certain. Frankly, the OUKITEL K7 is sturdy enough to be used as a weapon, never mind a phone. Weighing in at 302 grams with dimensions of 78mm x 168mm x 14.5mm, it isn't lightest and easiest of phones to use on the go, at least for typing

I can't say it's a huge problem for myself. It sits perfectly well in the front pocket of my jeans when I'm out and about. It's also far superior to my Samsung Galaxy S8, for peace of mind, sat in my trouser pocket while hiking hills, mountains and other difficult terrains. Slight bumps from my leg against the hazards of the wilderness don't feel like they'll leave a scratch on this beast of a machine.

The design of the K7 is as expected from any standard phone in today's market. The black design, with the magnesium-alloy strips at the top and the bottom of the front, as well as around the logo, camera and buttons on the back and the side gives the phone an unassuming but aesthetically pleasing appearance. The front is dominated by the 6 inch (slightly) screen, protected by a curved glass cover. 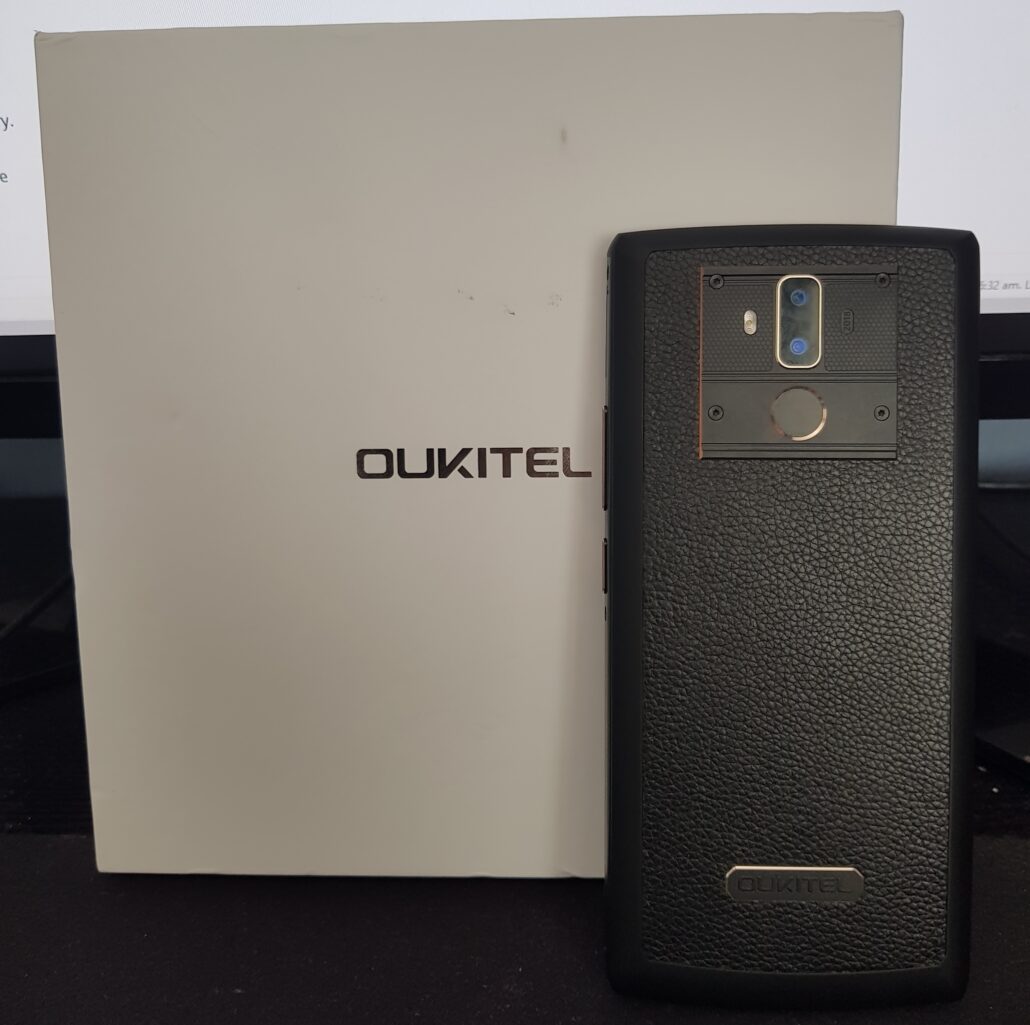 Complementing the size and design of the phone is the Australian calf leather coating the back. While the materials are understandably cheaper, I can't help but look at the phone and feel like it's a very solid piece of equipment. The amount of plastic you can actually see is minimal, only around the edges of the device, which really adds to the effect.

If like me, you like a phone that's unassuming yet still attractive, then this certainly won't let you down. Looking good is all fine, but then you need to think about how the phone functions.

Using the K7 - Missing Conveniences and a Little Slow

Opening this review, I said that I'm impressed by the OUKITEL K7. That is, I'm at least impressed with the battery. I can't say everything is ideal or perfect, and there are certainly areas where the K7 could be improved. Using the base Android 8.1, there's a lot to get used to. At least, that's the case for me. A person used to simple conveniences like being able to organise your App Drawer with folders.

It's small issues like this, and other usability problems, that can really hinder my enjoyment when using the K7. Other examples are closing apps in the background, which is sluggish to do. You can't just click one button and it's gone, you have to swipe to the right on what isn't the most responsive screen. Also, the close all option is hidden until you go right to the bottom of the list. 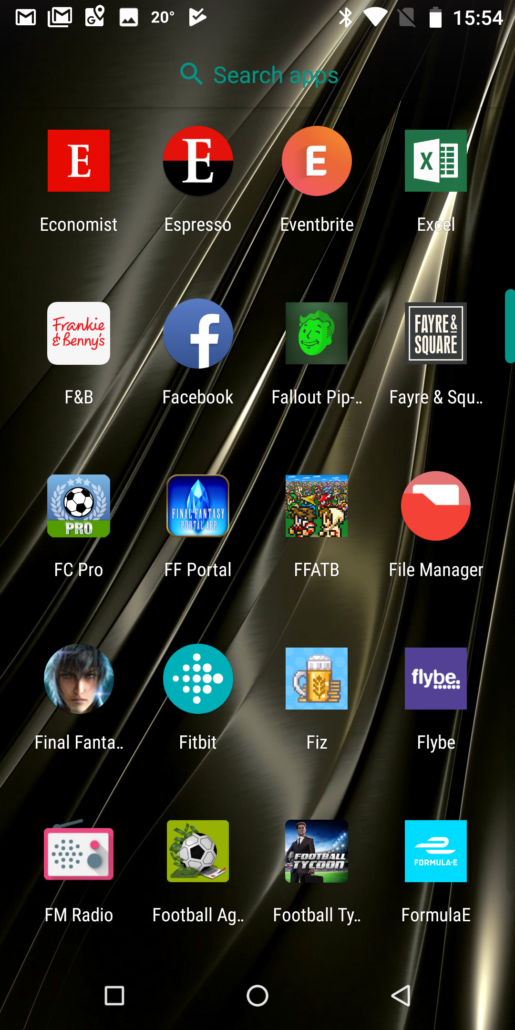 On the display. It's slightly better than the similarly priced Samsung Galaxy J3 and features three-point detection. One thing I will say is that it looks fantastic. I've used it to watch a number of videos, from Youtube to Netflix, showing the whole gamut of colour and brightness. What surprised me the most is that even in bright, glaring, sunlight - everything was clearly visible and easy to use.

Other slight niggles come as a result of the phone's budget. It's missing NFC and the fingerprint scanner on the back may as well be made of biscuit for how useful it is. I've attempted to get it detecting and using my fingerprint on multiple occasions, no joy at all. The Camera also shows the budget nature of the K7. With a max zoom of x3, you'll never take the best shots from any distance. Once you do zoom in, quality deteriorates. It's certainly suitable for quick snaps and the regular user, but far from the company line of being for photographers.

Edit: I was requested by Oukitel to factory reset the phone and see if that would get the fingerprint sensor working. I did, and it did - it seems to be a glitch that is easily fixed.

The real charm of the OUKITEL K7 is just how functional it really is. I already know that this is my primary phone of choice when I go to Gamescom at the end of the month. Why? The Battery. It comes with a 10,000 mAh battery that will keep you going all day. That's the core reason I've taken a bit of time to actually get this review out, testing the claims made by the company.

50 Days standby is a long time. One of my very first tests was to see exactly how long it took for the phone to drop to a level I could work with. From 100%, it took 10 days of minimal use to drop to 50%. Just to be certain, I left it another 5 days, the K7 was on 25%. Of course, this isn't true standby - I had WiFi turned on and, a few times a day, checked it to see if it was still on. Use was still minimal.

For actual day to day use, the phone can last a good day or two. The battery laughed off four hours of GPS & Google Maps usage while I went on a hike, dropping by maybe 10-15%. All this while it was playing music and receiving notifications from emails, Facebook Messenger, WhatsApp and more. It wasn't used for pictures, however, that was left to my far superior Samsung Galaxy S8.

Ideally, the phone is for those who need to make phone calls, access their emails and a variety of other social media while on the go. It's perfect for those who travel a lot and want something to watch on the go, using the high capacity and vibrant display to their best. Games, well, they're mostly a no-go but for a completely different reason.

For the price you would be paying for the phone, you can't truly expect something outstanding from the OUKITEL K7. To test the phone I've used BOTH AnTuTu and Geekbench. Needless to say, if you're expecting fantastic results, you're not going to be impressed.

One thing is certain, the phone leaves a lot to want in power. The GPU test left the phone stuttering during the benchmarking. Even testing the phone myself on less intensive titles like Kill Shot Bravo saw the phone struggling on even slightly busier moments. Titles like Boom Beach, Clash Royale and Pokémon go, you'll have no problems with. Anything intensive, you may as well forget about it.

Outside of games, I can't say I've noticed any issues. I've had browsers open with a number of tabs. Spreadsheets, PDF's and more, all while playing music through my headset (the OUKITEL K7 does feature a headphone jack). The phone chugged along with no concern at the slightest.

My only real concern is regarding heat dissipation. During the benchmarking, the magnesium alloy around the camera was very hot to the touch. My real worry is that with the rear being covered in leather - not exactly the most conductive of materials - the phone could find itself heating up rapidly if put under any real strain.

At a low price of $179.99, the craftsmanship and functionality you get with the OUKITEL K7 make it more than worth it. Particularly as a backup phone, one to do your more time-consuming work tasks. Or for long journeys, where you can use the huge capacity and battery to watch a number of TV shows or films. Though it certainly won't be anything that gets you playing high-level mobile games.

For the low entry price, there's little doubt that the OUKITEL K7 is good value for money. It will never be the phone of choice for somebody looking to play even half-decent games on it. What it is perfect for are those who are on the go, people who are constantly on their phone, on calls, sending emails and more. The people who often find their current phone running out of charge and need that extra life from their phone.