LG’s flagship LG Optimus G smartphone is eying to get its successor released soon. As always leaks are helping the speculations and rumors going the rounds about this new smart phone of LG. LG Optimus G Pro specs have also been released in the leak from Engadget with the phone getting a 5-inch 1080p display!

The LG Optimus G Pro will first launch in Japan on NTT Docomo and then would start making its way out to other countries soon after. LG is planning to roll out the device in China and some European countries in the same quarter. LG’s new successor of its flagship smartphone is obviously following the trend of 2013 carrying a 5-inch display screen and equipped with quad-core processor. 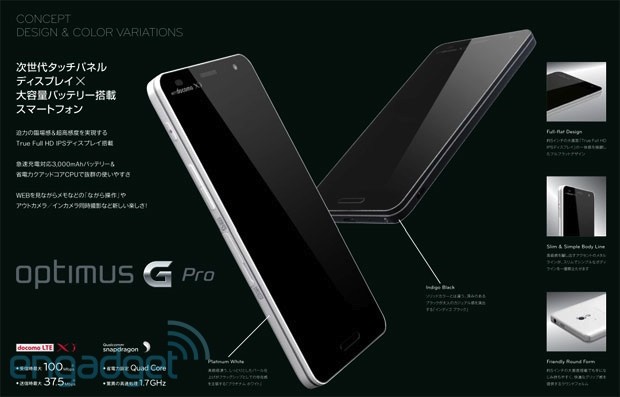 Apart from carrying a mega 5-inch 1080p display with a 1.7GHz quad-core Snapdragon S4 Pro processor LG Optimus G Pro will also be bundled with 32 GB of on-board storage and 2 GB RAM. The rear facing camera is said to be 13 MP while the front-facing camera is 2.4 megapixels. Android Jelly Bean 4.1, 3000 mAh battery and LTE are some other features. Many of the features from Optimus G will be improved over PRO also including some new ones.

LG's Optimus G won the hearts of our reviewers and finding the barely-differentNexus 4 is a feat worthy of a mythological hero -- so here's some exciting news. A tipster has sent us the above leaked slide, revealing that there's a new(er) kid on LG's block in the form of the Optimus G Pro. The 5-inch handset comes with an upgraded 1,920 x 1,080 display and is packing a 1.7Ghz Snapdragon S4 Pro APQ8064, 2GB RAM, 32GB Memory, LTE and a 3,000mAh battery -- tallying with a separate leak we've spied on Blog of Mobile. Reportedly weighing in at 160 grams and measuring 139 x 70 x 10.1mm, there's talk of Jelly Bean, a 13-megapixel rear camera and 2.4-megapixel forward-facer for even better self portraiture. Naturally, as it's destined for Japan's NTT DoCoMo, you'll also find One-Seg andNOTTV functionality baked inside -- which only adds to our complex that those in the Far East get all the best toys.

Earlier rumors were suggesting as May being the launch month for LG Optimus G Pro, but looking at the launch of Samsung Galaxy S IV probably in the same month, it doesn’t look like so anymore. Since Galaxy S series is by far the hottest phone of the Android line and it would be too naïve to go head on head with Samsung against its own flagship handset.