LG has released its new LG G3 Stylus specs before the IFA starts next week. While the device was previously rumored to be a competitor coming against Samsung Galaxy Note 4, specs don't prove that. LG G3 Stylus is actually a downgraded LG G3 equipped with a pen coming as mid-range smartphone for a reasonable price. The latest LG G3 Stylus officially "offers large display and stylus-enabled user experience at exceptional price" giving some good alternative to phablet fans. 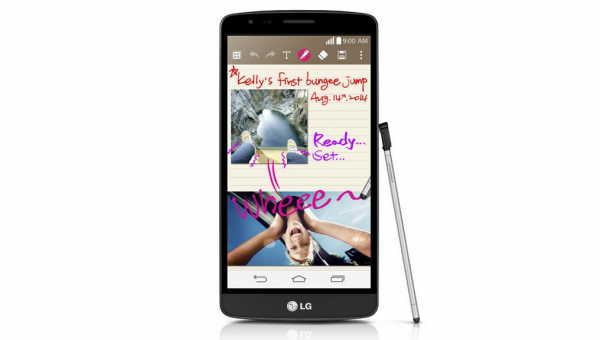 Now if you compare these specs to the flagship LG G3, you will see that South Koreans have compromised on a lot of specs to get you it "at exceptional price". LG G3 sports an insanely high-res 5.5-inch display with 1440 x 2560 resolution. Stylus's RAM is down to 1GB from 3GB and internal storage to 8GB from 32GB. The designing of the G3 Stylus is similar to that of the flagship G3 consisting of thin bezels, Floating Arc tapered edges and metallic skin. The Stylus is made of Rubberdium TM.

Thankfully, like the designing, LG G3 Stylus will retain various of the G3 software features like Dual Window multitasking, Smart Keyboard, Gesture Shot, and more. Running on the Android 4.4.2 KitKat, G3 Stylus UX is exactly like the one you see on LG G3. The camera sports similar software features like Touch and Shoot that lets users touch anywhere on the screen to focus and shoot a photo quickly. The Gesture Shot on the other hand helps the selfie-photographers to easily shoot their own shots.

Unlike what we had seen in previous rumors, LG G3 Stylus is definitely not a Note 4 competitor. However, it would surely present itself as an alternative to phablet-fans looking for less expensive options. Samsung Galaxy Note 4 is expected to retain the 5.7" size whilst improving the resolution to 2,560 x 1,440 pixels (QHD). Improving the designing, Sammy is rumored to include metal in the designing and will be offered with both the Exynos 5433 and Snapdragon 805. Camera will be 16-megapixel with OIS module and the phablet will have all the sensory goods sported by Galaxy S5.

LG will officially unveil the LG G3 Stylus at IFA with detailed specifications and price information. The device will debut in the Brazilian market in September with Asia, Middle East and Africa to follow. LG G3 Stylus will be offered in three color options of black, white, and gold.