Sledgehammer Games’ most awaited Call of Duty: Advanced Warfare is now out on open shelves but chances are that you might already be half way through the single player campaign as copies of the game leaked out heavily for latest consoles and it was cracked for PC and put up online for download prior to its official launch. However, if you are still waiting to pick a copy of the game for your PC or download it from Steam, here is some motivation for you in form of a few in-game screenshots taken from maxed out PC version of the latest shooter that leaked out recently showing impressive graphical and texture detail. 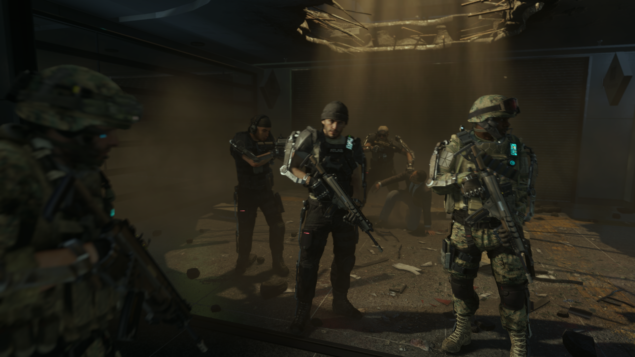 In the past few days, more and more news and leaked in-game media content from the most technically advanced first-person shooter video game in Call of Duty franchise has been piling up on the internet, and right now, while gamers on all platforms are jumping into the futuristic warfare, the game has taken over the front pages of many video game reporting websites. Call of Duty: Advanced Warfare is officially out today, but the game is being explored by many gamers for days now, as it leaked out early and was acquired by players on latest consoles and PC.

We have seen many leaked Call of Duty: Advanced Warfare screenshots recently, and have even compared the last-gen versions of the game to the next-gen versions and PS4 version to the PC version to see how the game has been optimized on each platform and how does it perform better on one compared to the other. But, more is always better, so if you haven’t picked up your copy of the PC version of the game yet, or started downloading it from Steam, you can check out some leaked screenshots of the revolutionary shooter that show how stunning it looks while running at maxed out setting on PC, and motivate yourself.

Shared by a NeoGAF member known as “ricochetguro”, screenshots showcase impressive graphics and highly detailed in-game textures and environments. Of course, you will need to check if your PC sports the recommended hardware that is needed to smoothly run the game if you want to max it out as well. If it doesn’t, you might be able to play the game at medium or low settings with the minimum hardware required. Without further ado, head down and see how Call of Duty: Advanced Warfare is the best Call of Duty game yet.