Samsung has gone ahead and released another One UI 4.0 beta update for the Galaxy S21 series after what I thought would be the last beta update for the phone before the final release. Today's beta update brings a heap of bug fixes as well as improvements. These changes and fixes show that Samsung is on track to release the stable version by year-end.

All the countries where the beta program is currently in progress are getting the update, and the firmware version this time around is ZUK1. If you are using the Galaxy S21 device, you can update to the latest beta by heading to Settings > Software update menu. Remember, only those who are running the One UI 4.0 beta will be getting the update.

As we have come to expect from Samsung, the latest beta fix several bugs reported by the beta users ever since they started rolling out. Wi-Fi hotspot, performance impact, and the removal of the stretch effect are just a few of the new changes that Samsung has made. You can check out the changelog below, courtesy of SamMobile. 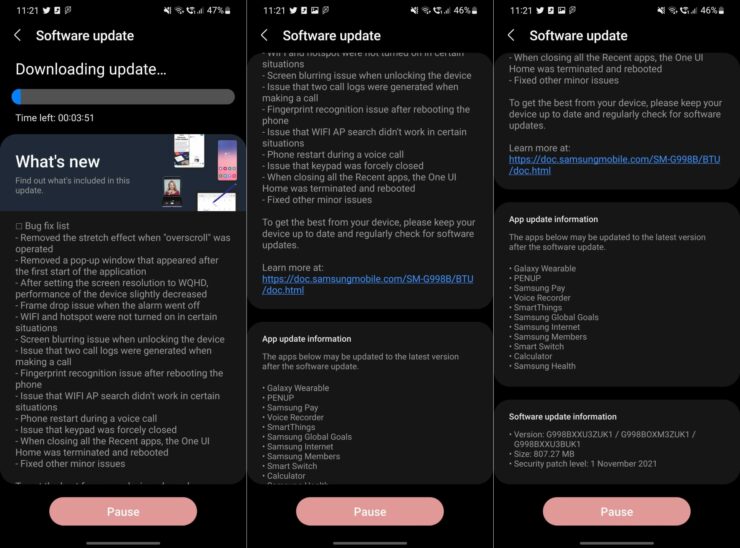 Considering how Samsung was once notorious for being among the worst OEMs when it came to software updates, this change is something that we have been waiting for, especially the ones who have been loyal to Samsung for as long as one can remember. I could not personally test the latest One UI 4.0 beta on my Galaxy S21 Ultra, but I am sure the experience is excellent for everyone.

The One UI 4.0 beta program has also expanded recently. It now contains the Galaxy Z Fold 3 and Galaxy Z Flip 3 in the update, and Samsung should be releasing the stable One UI 4.0 for the Galaxy S21 series by the end of this year.

If you are outside the region where the beta program is currently active, you can head over to this guide and get started with downloading the update for yourself and let us know how your experience has been.