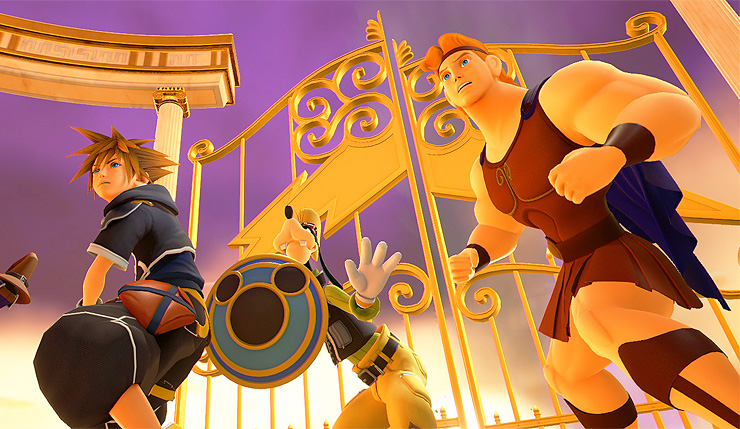 Square Enix has just dropped a hearty new batch of HD Kingdom Hearts III screens, which show off the game’s Olympus and Twilight Town Worlds. We’ve already seen plenty of Olympus, but, until now, most of the footage and screens have focused on the environment and action – these new screens focus more on characters like Hercules himself, Zeus, Megara, and Hades. The Twilight Town screens show off a bunch of returning characters like Hayden, Pence, Olette, and Ienzo, and provide glimpses of locations like Ansem’s Lab and the Old Mansion.

Check out the screens in the gallery below (click the images for full resolution):

Kingdom Hearts III was first announced back in 2013, but development, led by perfectionist series creator Tetsuya Nomura, has been slow-moving and shrouded in mystery. Thankfully, the game resurfaced last year, and now seems to be coming together smoothly. The game will feature unique Worlds based on Disney’s Hercules, Toy Story, Monsters Inc., Frozen, Big Hero 6, Tangled, and Pirates of the Caribbean. Square Enix has remained mostly cagey about Kingdom Heats III’s plot, only releasing a very basic story description:

Kingdom Hearts III tells the story of the power of friendship as Sora and his friends embark on a perilous adventure. Set in a vast array of Disney and Pixar worlds, Kingdom Hearts follows the journey of Sora, a young boy and unknowing heir to a spectacular power. Sora is joined by Donald Duck and Goofy to stop an evil force known as the Heartless from invading and overtaking the universe. Through the power of friendship, Sora, Donald and Goofy unite with iconic Disney-Pixar characters old and new to overcome tremendous challenges and persevere against the darkness threatening their worlds.

Need to get caught up on Kingdom Hearts before the new game hits? Square Enix recently announced Kingdom Hearts: The Story So Far, which collects every KH game to date for only $40.