This is something we don't normally see happen. Apple's website is the source for some new revelations just hours before the official iPhone 5 event. The search engine on Apple's website has come up with links that confirm what products Apple is going to announce in just under an hour from now. Today alongside the iPhone 5, we will be treated to the new iPod touch, new iPod Nano as well as iTunes 11. 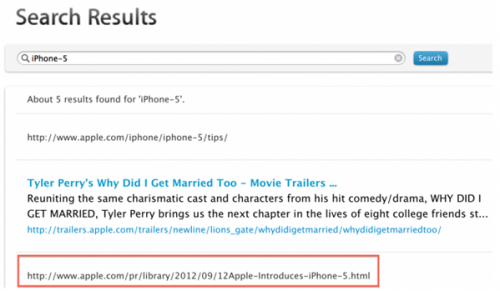 I have been through many heated debates on what Apple will end up calling its latest iPhone. The media invites that were received had a subtle hint that the next iPhone will definitely be called the iPhone 5. Many believe it would be called the New iPhone, just like Apple did with the third generation iPad earlier this year. When the keyword "iPhone 5" was searched on Apple's website, it came up with a link that confirms for sure that its going to be called the iPhone 5.

Apart from that, we now also know that Apple will be announcing a new iPod touch as well as a new iPod Nano after its done unveiling iPhone 5. The same search tactic revealed corresponding links for these devices. From what we gather, these new iPods come with quite a number of new features and changes. It will be interesting to see what Apple has done with its portable music players this time around.

Through the search engine it has also been confirmed that Apple will be announcing iTunes 11 at this event. We have been waiting for this major iTunes update for quite some time now, hopefully it will come with a lot of improvements as well as a new UI we have heard rumors about.

Currently if you search for these keywords on Apple's website, no links are shown anymore. Once the official announcements have been made, these links will definitely be back up as they will point to official press releases for respective devices. One more thing, the iPhone 5 is getting LTE for sure.