Apple iPhone 6s Leaks On GeekBench With A9 And RAM Details 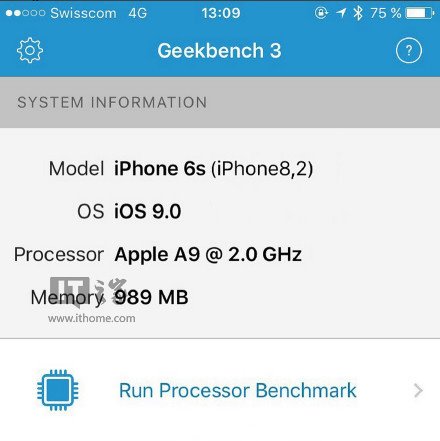 Apple's iPhone 6s Pops Up On GeekBench; Listed With 1 GB Of RAM And A9

While we've been seeing an increasing number of speculations and leaks that suggest a RAM increase on the iPhone 6s, a GeekBench posting today shows otherwise. As you can see in the image above, the device labeled as iPhone 6s (iPhone 8,2) has been listed with Apple's A9 and 989 MB of RAM on GeekBench.

Courtesy of folks over at China, we see the iPhone 6s' first benchmark posting today. And boy does it come with a disappointment on board. 989 MB of RAM on the iPhone 6s should be another chip in the armor of Apple's upcoming flagship, which is already being speculated to not see any positive growth after its launch, due to very little feature upgrades.

Feature upgrades and refinement have always been the trademark of Apple's 'S' lineup of iPhones so we'd advise not considering anything to be set in stone right now. It could very possibly be that Apple's testing out the A9 with 1 GB of RAM to better ascertain its performance, and 2.0 GHz for an Apple processor does seem to be quite sufficient, since the Cupertino designer is known for its hardware/software optimization.

The current A8 found on the iPhone 6 duo has been limited to a maximum frequency of 1.4 GHz, so perhaps Apple intends the A9 to be the main jewel in the iPhone 6s duo's crown. But a RAM upgrade would be nice as well, given that apps are becoming increasingly complex these days as well. Stay tuned and let us know what you think in the comments section below.

Update: Take a look at the iPhone 6s outperform the competition in a complete GeekBench posting here.