While we've been seeing renders, specifications and other pieces of information surface related to Apple's iPhone 6s over the past couple of days, benchmark sightings of the upcoming devices have been somewhat rare. We saw the first benchmark of Apple's upcoming flagship leak yesterday, and with it came some disappointing news. The iPhone 6s, while listed with frequencies of 2 Ghz on the A9, came with only 1 GB of RAM, which is contrary to what we've been hearing so far. Well, some fresh benchmarks of the iPhone 6s have once again surfaced today, and they provide better news about its specifications. 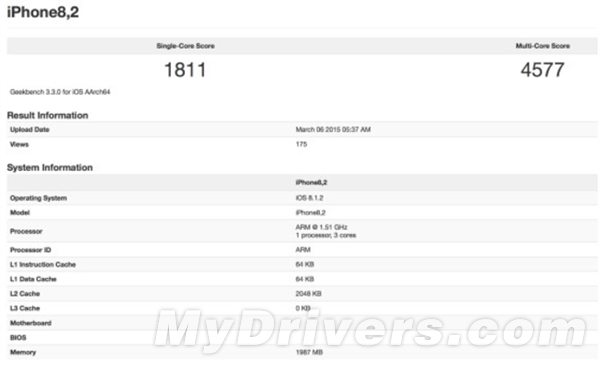 Today's iPhone 6s listing, courtesy once again of folks over at China, comes with some more accurate looking information about the device. A RAM upgrade on the iPhone is long overdue on Apple's part, and we've been hearing some good news in this regard until now. Today, we add more information which supports the idea of a RAM increase on the iPhone 6s, as you can see in the image above.

The GeekBench listing of the iPhone 6s, or the iPhone 8,2 shows the device with 2 GB of RAM on board. Looks like device testing over at Apple is taking place at full scale these days, as not only the RAM is different on today's posting, but so is information about the upcoming iPhone's SoC - the Apple A9. While yesterday's listing saw the processor appear with impressive frequencies of 2.0 GHz, today's information appears to be more closer to reality.

The processor on the iPhone 8,2 is listed with a tri-core CPU, clocked at 1.5 GHz. Tri-core is a concept which Apple debuted with the iPad Air 2 and the A8X last year, and we saw the difference made by Cupertino just adding one more core to its processor architecture. Frequencies for this ARM based processor are also listed around 1.5 GHz, which is more in Apple's territory.

And finally, coming towards benchmark scores achieved by the alleged iPhone 6s, we see that it tops almost every other device out there. Multi core scores for the iPhone 6s are above 4000, or 4577 to be more exact, and devices such as the LG G4, the HTC One M9 and the iPhone 6 itself. Single core scores of 1811 is also higher than other Android flagships, that feature the likes of the Snapdragon 808, the Exynos 7420 and the Snapdragon 810.

Apple definitely seems to be doing something right with the A9 it appears, and with TSMC now said to have finally commenced its 16nm product manufacturing on full scale, results seems to be poring in. Thoughts? Let us know what you think in the comments section below and stay tuned for the latest updates.