After respite for a few days, leaks surrounding Apple's upcoming iPhone 6S are back, and this time they confirm what we've heard earlier as well. The iPhone 6S Duo is expected to come with several new features on board, one of which will be an all new Force Touch feature. This is expected to allow users to interact with their devices in a more realistic manner, with the screen providing feedback about even the slightest gestures. But its also expected to have some drawbacks, one of which will be increased thickness, as pointed out by an earlier iPhone 6S duo case leak as well. 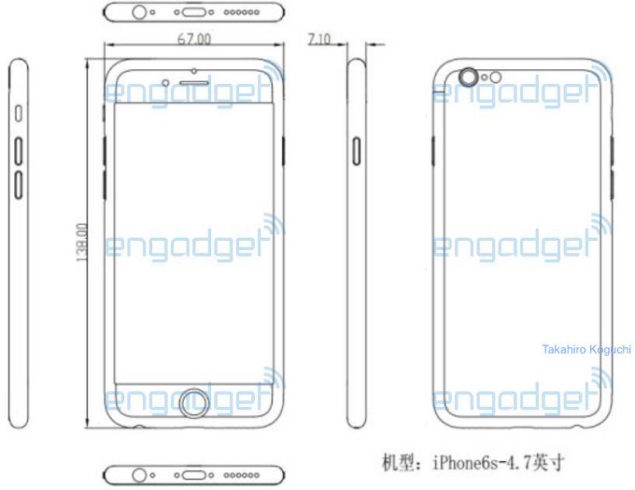 After earlier leaks, this time folks over at Engadget have manged to get their hands on what they claim are blueprints for Apple's next iPhone. While they show no design changes on the device, as we've been telling you all along and should be expected this year, a thickness increase is however shown today as well. While the iPhone 6S has been reported in an earlier leak to come with an increase of only 0.10 mm, courtesy of Force Touch perhaps, today's leak increases its thickness to 7.10 mm, an increase of 0.20 mm from Apple's current flagship smartphone.

Since Apple generally likes to follow the mantra of 'as thin as possible', seems like the Cupertino manufacturer really wants to introduce several new features to the 2015 iPhone lineup, if a thickness increase is on the cards. The iPhone 6 Duo saw a completely revamped design last year, alongside a screen size increase, which led many to criticize Apple for finally following the herd. So its natural that folks over there are looking towards some new features as well in order to completely differentiate the iPhone lineup from the plethora of Android flagships out there. As to what these changes will be, we can only speculate until September. Until then, stay tuned and let us know what you think in the comments section below.