We've seen several component and features leak of the iPhone 6S so far, but the list would be incomplete without a case leak of Apple's upcoming flagship smarpthone duo. Case manufacturers after all get information about devices beforehand, in order to prepare their products, and one such manufacturer has been kind enough to provide some details which concern the iPhone 6S Duo's dimensions today.

Folks over at GSMArena have been able to get their hands on some case sketches of the iPhone 6S Duo, prepared by manufacturer ITSKINS. The sketches, which can be seen above confirm several speculations that we've been seeing so far about Apple's 2015 flagship upgrade. By the looks of things here, the iPhone 6S and the iPhone 6S Plus will be identical to the iPhone 6 in terms of overall design language. But what's interesting is the dimensions of these cases, which help provide us some information about the presence of Force Touch on this year's iPhones. 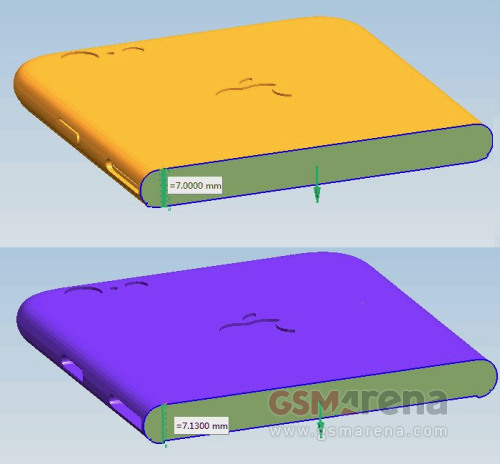 As can be seen in the image, this year's iPhones should be a tad thicker than last year's flagships from Apple. The iPhone 6S, according to today's images will measure 7.0 mm, which is exactly 0.1 mm thick from last year's iPhone 6, that came with a thickness of 6.9mm. The iPhone 6S Plus on the other hand will be seeing a thickness increase of only 0.03, both of which shouldn't be discernible to the normal eye, unless your eyesight's above normal. The culprit behind these increases appears to be Force Touch, which should require some additional layers for all that haptic feedback which Apple's been reported to introduce in its devices this year. But the increase isn't really that much if you ask us. We'd take a 0.1 mm increase in thickness for Force Touch any day of the year. Stay tuned and let us know what you think in the comments section below.