Folks at Chipworks report that the latest iPhone 6s and 6s Plus are flaunting two different sized A9 processors as they have been dual-sourced from Samsung and TSMC. Earlier rumors had suggested that Samsung and TSMC will be responsible for manufacturing Apple's next gen processors, A9 and the A9X, respectively. Seems like it's more than just a change of companies as both the A9 processors designed by the two companies are different in their sizes too, with Samsung version being 10% smaller than the other. 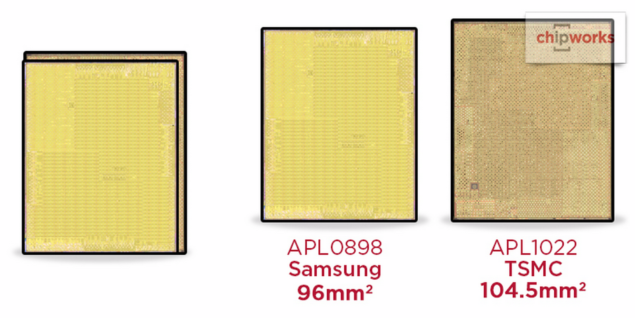 Chipworks analysis indicates that Samsung's manufactured A9 processor (part number APL0898) at 96mm is 10 percent smaller than the chip manufactured by TSMC (number APL1022) at 104.5 mm and could possibly bear some performance differences. The smaller size could very well be due to the chip being produced on a smaller die size, resulting in a more power efficient processing chip than the TSMC's larger processor.

As Apple had to produce a ton of new iPhones to meet the initial demand, it is plausible that the company went with the two manufacturers to deal with the sourcing issues. Both the Samsung and TSMS have followed the exact same design that has been implemented in two different technologies. Cupertino tech giant has often sourced same parts from multiple OEMs to tackle with the demand. However, this strategy hasn't gone well for the company as 9to5Mac reports that Apple is facing lawsuits over differences in Samsung and LG display fitted in the MacBooks. We will see if there are any performance differences in the latest A9 chip that could cause annoyances for some users.

Apple's A9 is expected to offer 70% increase in performance and 90% increase in GPU capabilities as compared to its predecessor. As Chipworks is currently testing the two processors to investigate how small the die is, we would know if there are any performance differences between the two chips discovered in their analysis. Stay tuned to this space for more updates on this.