Following up months of rumors, leaks, analysis, reports and leaked images, here is an extremely comprehensive, easy-on-the-eye infographic that is trying to summarize all of the leaked and reported material circulating the iPhone 6. This iPhone 6 infographic breaks the next gen iPhone into its design and hardware components and beautifully summarizes the probability of each of the spec coming this fall.

A plethora of leaks and rumors come every year trying to predict the year's iPhone and its various specifications. This year too, we have seen many from haptic feedback to sapphire crystal display and a major focus on an increased display size. This iPhone 6 infographic has managed to beautifully summarize all the major leaks for your perusal. Giving a one hundred percent probability to a 4.7-inch display panel, iPhone 6 infographic gives each and every component a per cent based probability of occurrence this fall. 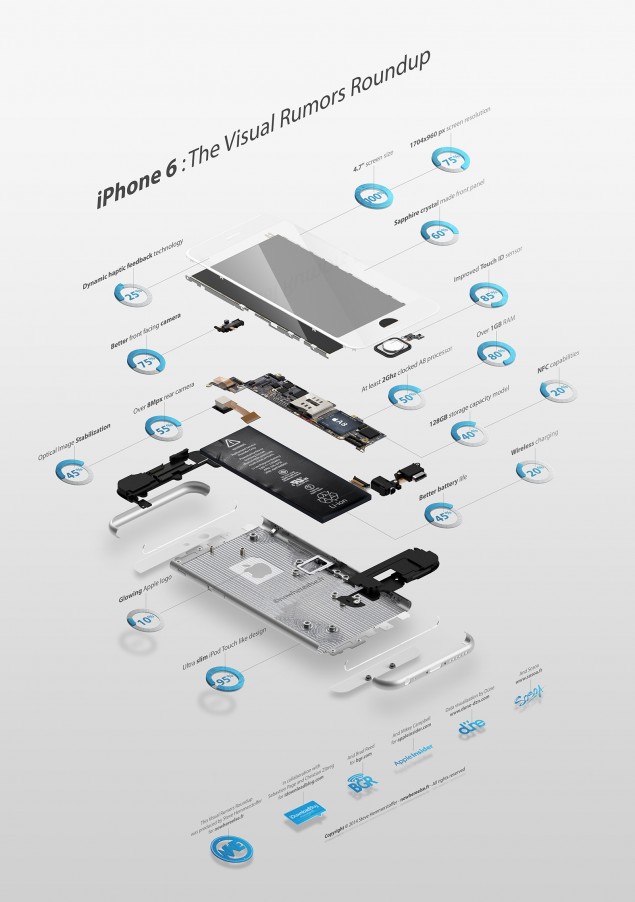 - Click on the image to have an enlarged infographic and get to stay updated on all the iPhone 6 rumors from just one image.

This illustration summarizes each component - both design and technical features - based on the leaks that have come up in the past many months. An estimate of probability is then calculated based on the both the repetition of the certain specs and the credibility and a good track record of the source.

Apple's next-gen iPhone 6 is expected to be launched in two variants of larger display sizes: a 4.7-inch iPhone 6 and another 5.5-inch iPhone 6 sapphire display phone. While the former too is expected to be made with sapphire, some reports suggested that Apple might not introduce both the smartphones with scratch-resistant, expensive glass. Leaks have also indicated that the bigger, 5.5-inch phone will be announced later in the year with more premium specs hitting the Android phablet market dominated by LG G3 and Samsung Galaxy Note.

iPhone 6 will have a focus on fitness apps powered by iOS 8; an A8 processor, a better camera with a new Exmor sensor and optical image stabilization and a curved design that has been shared by various rear shell panel images of the smartphone. iPhone 6 models are also expected to sport a better battery capacity than the current iPhones.