A new tweak is being developed to bring desktop-level multitasking to the iPad with iOS 7 jailbreak [Read: The Latest iOS 7.0.4 Update is Jailbreak Safe!]. There hasn't been any success so far to achieve iOS 7 jailbreak for newer devices. However, devs are working hard.

eswick on reddit is the developer responsible for this tweak. He has posted a teaser of this tweak displaying some OS X sort of multitasking interface. Apps will open as different windows with a concept of multiple desktops and the ability to make each app full screen. No more is known about this iOS 7 jailbreak multitasking [Read: Get Cydia for iOS 7! Jailbreak for iOS might not be that Far!] features. However, the developer promises the tweak will be available for both iOS 6 and the iOS 7 in early 2014. 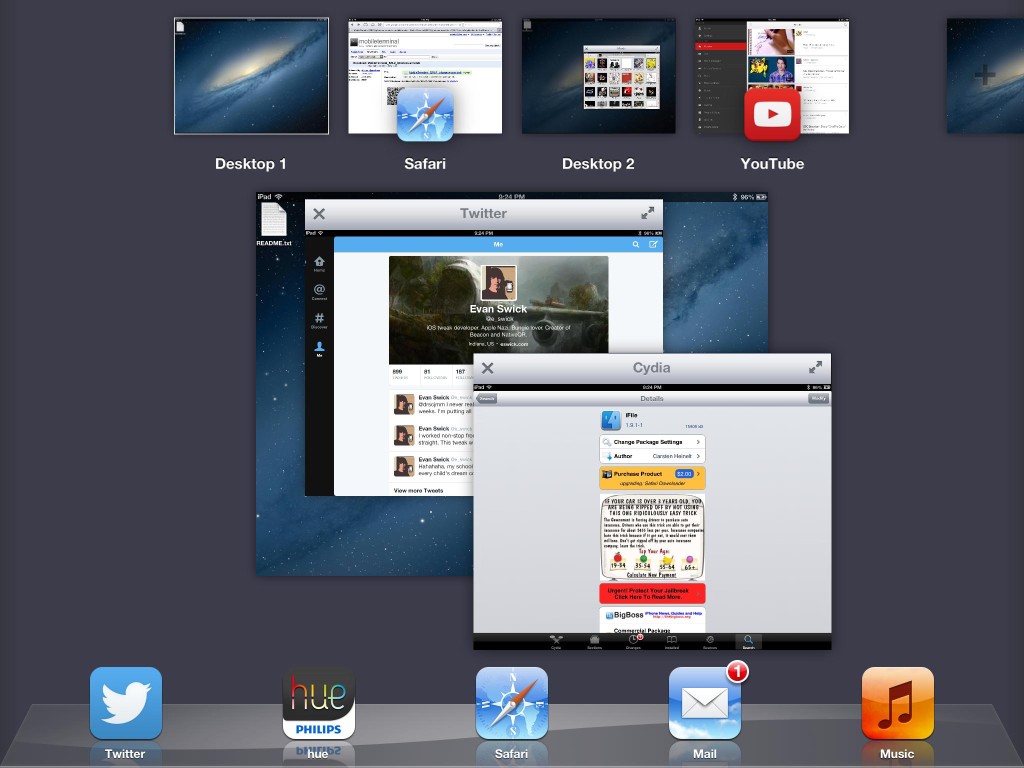 As reported earlier, evad3rs is working hard to give out some good iOS 7 jailbreak but it is taking quite some time. We can though wait to see the actual jailbreak solution with these beautiful teasers.

This latest iOS 7 jailbreak multitasking teaser will surely make the users happy who have been complaining about the limited office utility of an iPad. Especially for the times when the work depends on switching between apps frequently [Read: Glimpse of Video Multitasking VideoPane Jailbreak App on iOS 7].

Keep checking WccfTech for more up to date news about iOS 7 jailbreak updates.

*Some of the iOS 7 Tips and Tricks, *Hidden iOS 7 Features II – Because the Surprises Never End!, *Features Introduced in iOS 7.1 Beta, *Android 4.4 vs Apple iOS 7 – Features Comparison and *iOS 6.1.3/6.1.4 Untethered Jailbreak Update: Dev Lowers the Priority for A5+ Devices!