When it comes to sci-fi shooters, there are few developers with the kind of fanbase and pedigree that Bungie has, and every worker that has thrived in their studios has come away with the knowledge of how to make a truly engaging gaming experience. At least, that's the impression I got when talking to Marcus Lehto. Marcus is one of the co-creators of Halo, sometimes called the father of Master Chief, and together with the humble V1 Interactive studio, he and the team are hoping to revitalize sci-fi shooters with Disintegration.

Disintegration may be designed and developed by a small team, but they're experienced, and you can tell as much just from the Disintegration demos we've seen thus far. But Disintegration wasn't always a sci-fi shooter, in fact, it started out as a tactical game, and when they decided to let the player keep their floating overhead viewpoint but add shooting into the mix, a brand new game was born. As a reminder, the game is currently due for release on PC, PlayStation 4 and Xbox One in 2020. 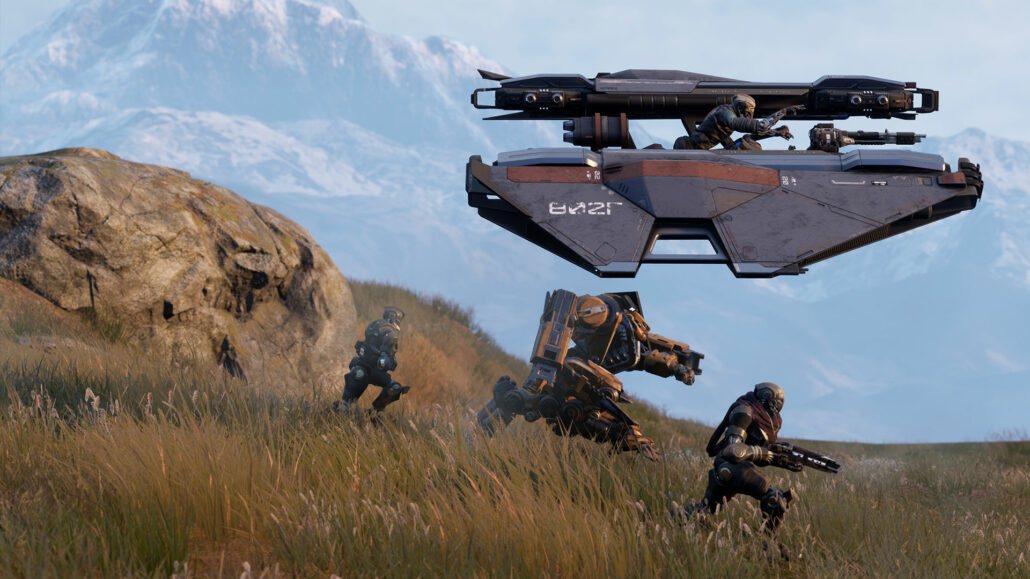 I know that you've worked with Bungie on Destiny and Halo in the past. How has that history with shooters and the sci-fi genre impacted Disintegration as a game?

A big impact. I mean, there's no question. There's a driving influence. With Halo, I was there from the very first day of building Halo all the way to the last game that Bungie built, which was Halo Reach. And then onto Destiny as well. There are even some elements of the very first game that I worked on at Bungie, which was Myth: The Fallen Lords.

Wow, a long time ago.

Yeah, it was a long time ago. You're right. But I was really just playing a small role at the very end of that game helping to finish it up. But it was still a very influential game to me because it was one that I played a lot with my friends to stay connected with them after I moved away from home to Chicago where Bungie was located when I joined them. As I moved away from Bungie and started my new studio, I explored lots of different game ideas, everything from little mobile games, to real-time tactics to first-person shooters and all kinds of stuff like that. I actually started working on Disintegration, the fiction for it, about six years ago. And then we started playing around with building a prototype for it just four years ago, and it started out as a real-time tactics game, just controlling units around on the ground and everything. And they were little robots, and it was really cool, it was fun. But there are just too many things like that. So I decided to lean in a little heavier on the kind of thing that I just love, which is first-person shooters, this thing I've been doing for decades now. So we took the first-person shooter aspect of the game by taking the camera into the sky, turning that into a vehicle, outfitting it with weapons, and allowing you to, from that shooter perspective, command those units on the ground in a way that's fluid, and consistent with first-person shooters. So you're literally firing command pulses down on the ground to tell those units to where to go, who to priority target, or what objective to achieve. Then each individual unit on the ground has unique abilities. And you can use those tactically in combat.

When I was playing the game I couldn't help but notice that your pilots are very well characterized, they all have like a distinct personality. How did that influence come about?

So when we started the multiplayer side of things - because we actually started the entire game, initially, as a single-player only campaign story campaign - but when we began to introduce the multiplayer component to the game, we had this idea of, instead of allowing the player to just pick whoever they wanted, and outfit the gravcycles however they wanted, which would cause a lot of really difficult balancing issues for us, if we allow that kind of granular sub-selection of elements, we decided to put them together in one conglomerate and treat them kind of like heroes in League of Legends or DOTA. So a crew is a gravcycle, pilot, and a set of ground units, and they all take on a theme. They're kind of like futuristic biker gangs - that's the way we have been describing it to ourselves. And as such, it's like a gang that has taken on an identity of something that they have in common together. And we can play with that. And we're having a little bit more fun with it in multiplayer. It still fits within the fiction of the universe.

But we want to have that kind of levity to multiplayer to allow us to just have fun and break free of some molds. So we can theme the crews very uniquely and allow the pilots themselves to have an identity that's all super unique to each one of the crews. And then each crew does actually kind of play a loose role in combat. So there really are a variety of different crews to suit a variety of different play styles for the players. Like, if you want to play the big heavy tank, that clears out ground units and nukes an entire area and can just be a giant bullet sponge in the sky, you can pick Warheads, if you want to be a support role that hangs back and shoots things from afar with a marksman rifle, but heals units you, you can play Technoir. Those are two different examples of crews that play that kind of role that, if you with your team can build out your crew comp in a day that's effective and tactical together, well, you guys can wreck the other teams.

What made you settle on this anti-gravity motorcycle combat for Disintegration as opposed to, like, a more regular on the ground shooter?

When we converted that camera in the sky from that traditional RTS into an entity that could actually engage in combat, we got really excited about this idea of that being this gravcycle vehicle that has omnidirectional movement, vertical movement, it's just so different from your average and standard boots on the ground shooter that we felt like that kind of risk, to take that bold move and make that the shooter element, was worth it, both creatively and also it feels really fluid. And it felt in keeping with what we were doing with commanding those units on the ground as well.

Can you tell me more about the lore of Disintegration?

It's really an allegory of elements of the world around us and what might happen if we ignore some of the intrusion of technology in our lives right now. And what happens if we ignore what's happening to the world around us and take some of these things to an extreme conclusion at the end, and use that as the foundation for the world that we live in now in Disintegration, it's set about 150 to 200 years from now, after climate extremes have continued and food shortages have occurred, causing riots and nations collapsing. And then ultimately, a pandemic that has just decimated humans across the globe, causing a near-extinction event with humanity, forcing humans to actually come up with some extreme measure to preserve itself. So, integration, actually removing the human brain, putting it in an armored shell and integrating that into a robotic armature. So that person can survive in something that's like, somewhat familiar to themselves, they have fingers and arms and everything else. Until a solution is ultimately found, the idea is that this is a temporary thing. And that once the solution is found, we can reintegrate that brain back into a cloned body of themselves, and they can live on as a human.

So they can do the things they really want to do, like, have a wonderful meal, have a great drink, and just love other people, and just be able to have a family, you know, the kind of thing that you do as a human. But not everyone agrees with that some of the Integrated actually love being this robot now, with the strength and speed and other abilities that they didn't have as humans. And they want to continue this evolutionary track away from humanity, this post-humanistic trajectory, and really leave humanity behind, and they've become something altogether monstrous. And that collective enemy is now called the Rayonne, a militarised form that is now hunting the remaining humans on the planet and converting them against their will. So it's a terrible thing, and our group of characters are some of these early integrated individuals who have fought back, have been imprisoned, and have now escaped and hiding, and trying to collect forces again, fighting this guerrilla warfare around the fringes of a much larger global conflict against the Rayonne.

How do the single-player missions play out in Disintegration?

The single-player missions are fairly linear as far as the progression that we take you through, but we allow the player to explore deep into wide-open territory, and tackle combat situations from any potential angle they want to, so they can actually go back and replay it again in a totally different way they wish to, but it's also a little slower-paced than multiplayer. So they have the opportunity once combat is done to explore the environment a little bit, look around, discover some things within the environment and find something that we call salvage, that they can actually take and bring back out of the missions and use to invest in their units to upgrade skill trees, for each one of the units and the gravcycle.

So there are RPG-like mechanics, with the upgrading?

When you were designing Disintegration, what made you decide on having a whole crew on the ground, in addition to the gravcycles?

Well, that part of the tactical element was built for the single-player campaign where you have the story characters that you actually get to know and they follow along with you and you're their commander in the sky, was super intriguing. It's fun because they talk with one another, they talk to you as the pilot in the sky, you get to know them, and you get to care about them. In multiplayer, it's just a really fantastic tactical element and a way to create these crews that have a very, very unique set of capabilities and a personality all of its own.

I think that's everything, but is there anything more I should know about Disintegration and V1?

Yeah, V1 is only a 30 person team. So we're really small. But and the fact is, I'm super proud of the fact that what we're building has such high ambition. But we plan to hit a very high quality with it. It's just a slightly smaller form factor than what you might find with other big giant AAA games out there. But as a small team, we can be more efficient, and we're all hands-on building this game together. And I can't be more proud of the team for what they've been producing.

Thank you so much for talking to me.