Over the years a number of games have tried to combine the first-person shooter and real-time strategy genres, but none of them have been wholly successful. Why is that? The two genres may seem incompatible at first glance, but when you boil them down to their essentials, they’re both all about twitch reflexes and split-second decision-making, so there’s no reason a mashup shouldn’t be possible. Enter Disintegration, a new attempt at a FPRTS from Halo co-creator Marcus Lehto.

Disintegration promises to let players decide how action or strategy-focused they want their experience to be, but are the results truly satisfying? Or is Disintegration just the latest victim of “Jack of all trades, master of none” syndrome? Strap in, it's time to take this one for a spin…

Disintegration takes place in a world where most of the human population has “integrated” by placing their brains in immortal robot bodies. At first this was mostly voluntary, the game’s main character Romer Shoal was an early integrated celeb, but that changed when the oppressive Rayonne began forcing people to integrate as part of their “post-humanist” agenda. Disintegration’s story begins with Romer escaping from prison and joining up with a ragtag band of rebels looking to take it to the Rayonne (or “Red Eyes” as all the characters call them).

You can definitely tell Disintegration was written by one of the minds behind Halo, as it serves up a lot of the same calling cards – lore that’s more developed than it needs to be, tech-enhanced protagonists who struggle with their humanity, inscrutable quasi-religious bad guys, ect. Sadly, don’t expect Disintegration to be anywhere near as engaging as the Halo saga. The game’s plot is mostly an extended MacGuffin hunt and I can’t say I ended up particularly attached to any of the characters by the time the credits rolled. The fact that the Halo games made people actually care about the faceless Master Chief was a damn miracle, and Lehto has not duplicated that magic here.

Of course, a dry story can be redeemed by great action, so how does Disintegration play? You pilot a heavily-armed Gravcycle, which can hover in three dimensions while blasting baddies with both a primary and secondary weapon/ability. You’re trailed by a squad of (usually) two to four ground units, which fight enemies autonomously, but can also be directed to a certain spot or ordered to take out a specific enemy with a quick click of the right shoulder button. Each unit also has a special ability (frag grenades, an energy field that slows down enemies, ect.) which you can manually trigger. And that’s about all there is to it!

Despite the simplicity of Disintegration’s setup, it still takes some time to get used to the flow of the action and what the game expects of you, but once you do, it feels pretty good. Don’t expect StarCraft, but there’s a certain strategy in knowing when to leave your teammates to their own devices and when to micromanage them. When to rely on your squad and when to charge in yourself with guns blazing. Which unit abilities to use on which enemies, and in what combination. When Disintegration is clicking, finding the right vantage points and systematically reducing a group of baddies to scrap can be quite satisfying, but unfortunately, the game’s mission and level design often undermine its solid fundamentals.

Disintegration’s levels are certainly varied, taking players on a tour across bucolic farmlands, bombed-out ruins, cluttered cityscapes, and destinations beyond. Most of this looks quite nice, although the game does suffer from some slowdown and stuttering on consoles. That said, sometimes Disintegration’s attempts to keep things fresh backfire, as certain missions, like the one that has players dash between safe zones to avoid deadly energy pulses or another where you infiltrate a prison without backup, don’t play to the game’s strengths. While combat is fun when you have a decent amount of space to maneuver in, all too often levels are filled with trees, debris, and tight spaces that are easy to get caught up on. Almost every mission also forces the player into extended “repel the hordes” style challenges and boss battles that entail a lot of mindless shooting and not much real strategy.

Ultimately though, the biggest issue with Disintegration’s campaign are that its missions are simply too long. Many stretch on for over 40 minutes, and that’s for a clean run without any dying and retrying. Checkpoints are generously allotted, but you can’t save mid-mission, which is a real issue when you take into account the PS4 version of Disintegration’s tendency to crash. More than once I spent more than an hour on a mission only to have the game bluescreen and wipe out my progress. Even without this maddening quirk, which will hopefully be fixed with updates, Disintegration’s campaign feels a bit grindy. Yes, it can be fun and challenging in fits and starts, but it also serves up too much of same over and over, and when something new is thrown in, it’s often more irritating than anything.

Of course, as you’d expect of a game from a former Halo guy, Disintegration also offers a fairly robust multiplayer component, and thankfully it’s much easier to recommend than the single-player campaign. There are three 5v5 modes to choose from – Zone Control (claim and defend points king of the hill style), Retrieval (grab bomb cores and return them to the drop point), and Collector (basic deathmatch race to 100 points). Multiplayer matches can get pretty hairy, but unlike other shooters with large player counts like Battlefield or Fortnite, you never feel like you’re just a hapless grunt lost in the crowd. There may be 30 to 40 units running around the map at any one time, but only 10 actual human players controlling them, and your elevated vantage point ensures you usually have a good handle on what’s happening. It feels great when a bunch of players converge on an area to claim a zone or fight over a core, with players naturally assuming different roles and contributing to the team effort.

Disintegration offers up nine different crews to play as, each with their own strength, weaknesses, weapons, and special abilities. I’m not sure how well balanced they all are, as the speedy, yet powerful Business crew and sniper-rifle-wielding Tech Noir were widely popular during my play sessions, while others like the clown-themed, sticky-bomb-wielding Sideshows went largely unused. Of course, all that may change as players really get a handle on each crew’s abilities. If I had one criticism, it’s that the number of maps is maybe a bit thin, but Disintegration developer V1 Interactive is promising free seasonal content drops, so multiplayer should only improve with time. Regardless, it’s off to a good start.

Even without any additional content, Disintegration is a solid value at its semi-budget $50 price point, as you’re getting a 15-hour campaign and a multiplayer mode you’ll likely put at least that much time into. Yes, the game does include microtransactions, but only for very-skippable cosmetic stuff, so you needn’t worry about the disintegration of your wallet.

This review was based on PS4 (for single-player) and PC (for multiplayer) copies of Disintegration provided by publisher Private Division.

You can purchase a PC copy at a 12% discount via Green Man Gaming. 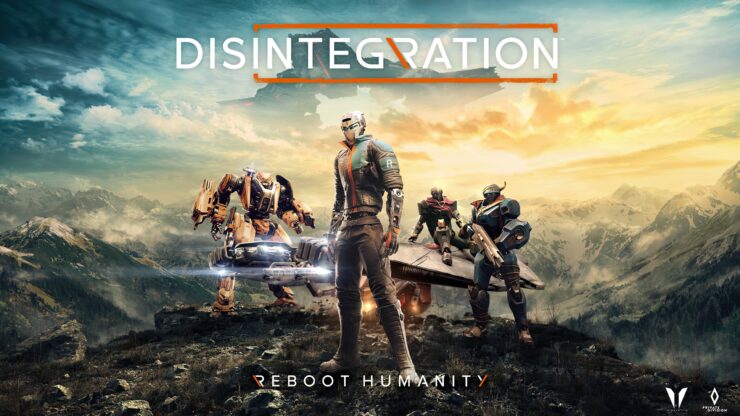 Disintegration is a somewhat fractured experience. The game’s quirky combination of shooter and strategy mechanics works, and multiplayer is a lot of frantic fun, but its single-player campaign suffers from some oversights, technical issues, and monotonous design. If Disintegration is a hit, I suspect it will be for its multiplayer, so while I’m being a bit conservative with my score now, the game will hopefully hover to new heights as PvP content is added. Whether you want to jump on your Gravcycle now is up to you.