Extreme sports games are having a bit of a moment right now, partly due to the success of Roll7’s OlliOlli indie skateboarding titles. After proving audiences were still hungry for kickflips and rail grinding back in the early 2010s, the British developer is now looking to answer a new question – what if you added guns to the mix? Enter Rollerdrome, an inventive mashup of skateboarding, roller derby, and arena shooting set in a near-future dystopian world.

Of course, there may be a good reason why Tony Hawk never pulled out a sawed-off shotgun in any of his games. Does Rollerdrome successfully land its tricky genre mashup or fall flat on its overambitious face? Tighten up your skates, it’s time to take this one for a spin…

Rollerdrome casts players a Kara Hassan, a rookie rising star in the game's titular sport. In a surprising choice, Roll7 intersperses each major chapter in the campaign with brief first-person adventure-style sequences that provide some information about the world the game takes place in. It soon becomes apparent there’s a “bread and circuses” situation going on with Rollerdrome providing a distraction from a growing resistance movement against the government. It’s interesting background color but ultimately doesn’t alter your experience in any significant way. It doesn’t help that Rollerdrome’s presentation is rather bland and unengaging. The game’s bright cell-shaded visuals are occasionally striking, but most of the time, they’re just kind of sterile.

Of course, story and worldbuilding are somewhat beside the point in a game like this, so how does it play? As Kara Hassan, players can easily do tricks by combining flips, grabs, and spins, grind on rails, dodge roll, and freely enter slow-motion “Reflex Time.” Your basic pistols and shotgun automatically target enemies, while the more powerful rocket launcher and laser weapons must be aimed manually. While some points are awarded for pulling off tricks, high scores mostly depend on chaining together kills. Landing shots, even if they don’t finish an enemy, will increase the amount of time you have to score your next kill while taking damage will reduce the time. Offing enemies will also cause them to drop always-handy health boosts, so lining up a steady stream of kills is important.

Rollerdrome’s systems are well thought out, although its controls take some getting used to. Your basic controls for getting around are lifted from the Tony Hawk games as you don’t have to push anything to maintain your forward momentum, and jumping is a matter of holding down the appropriate button and releasing it when you want to take flight. These controls make sense in a game where tricks are the only focus but feel somewhat off in a game where you’re also shooting at things and trying to get around in a semi-efficient manner. I eventually got the hang of things, although I had to remap my controls (grinding needs to be on a shoulder button).

Rollerdome’s campaign unfolds across several stages which take place in a series of relatively small arenas. There are only a few arena themes (desert, arctic, etc.), with each being reused several times. Early stages strike a nice balance, with plenty of well-placed ramps for tricking and enemies that can be taken out quickly. It’s easy to slip into a satisfying flow and start racking up juicy combos and flashy moves, which is important as Rollerdrome’s campaign requires you to complete a certain number of challenges to progress. Said challenges include achieving high scores, collecting trinkets scattered around arenas, and other more specific things. You can actually switch off having to complete challenges to progress in Rollerdrome’s rather extensive accessibility menu, but I was having plenty of fun repeating stages to hunt down achievements and ever-larger scores.

Unfortunately, that didn’t last as the stages progressed. Rollerdrome offers a steady flow of new enemies, which all add some additional level of complexity to the mix. Some enemies have shields, some fly, some teleport. They attack you with homing missiles, mines, sniper rifles, and fiery lasers that can reach across the stage. Eventually, the game starts throwing multiple AT-ST-like mechs at you. Every new enemy added either takes more shots to kill, is harder to target, or can hurt you in new ways, often all three.

Of course, it’s normal for a game to ramp up its challenge, but Rollerdrome starts throwing so much at you that the fun chill feeling from early levels is eradicated. Stages start to feel like a grind as you’re forced to constantly dodge roll around arenas to avoid the half dozen sniper sights, lasers, and missiles targeting you while pumping bullets into enemies that take too long to kill. Pulling off big tricks is often punished as they leave you open to being shot, so you just rail-grind and shoot, rail-grind and shoot. I was still racking up lengthy combos and good scores in later stages, it wasn’t that the game was too hard, I just wasn’t having much fun anymore. This trend reaches its nadir during a couple of drawn-out boss fights that don’t play to the game’s strengths at all.

I’m sure some will relish Rollerdrome’s intensity, but those coming to this game from OlliOlli may be surprised by how different it feels. This isn’t a game about getting into a flow state groove where your greatest opponent is your own perfectionism. This is a sweaty-palmed actioner that pushes back hard, and when you add the game’s somewhat loopy controls to the mix, the result can be frustrating. Still, if this onslaught is for you, there’s a decent amount to keep you coming back. The game’s campaign takes around 6 hours to complete (if you’re not using assists) at which point you’ll unlock the extra-tough “Out for Blood” mode. It could take 15 to 20 hours to clean up every challenge Rollerdrome has to offer, but many players may start feeling a bit ground down before reaching the finish line.

This review was based on a PS5 copy of Rollerdrome provided by publisher Private Division. You can grab a copy of the game here. 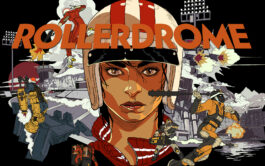 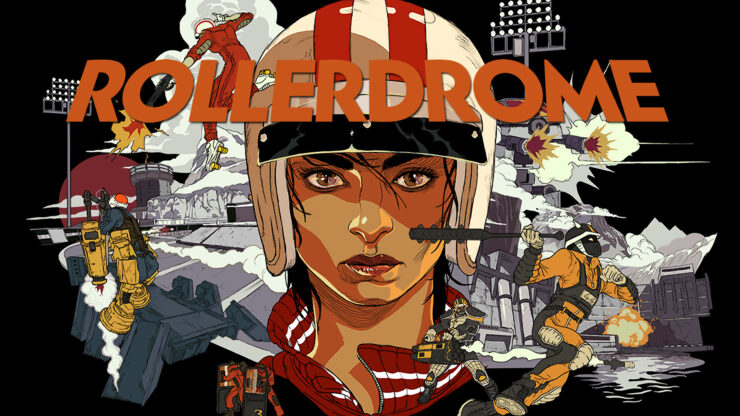 Rollerdrome produces some badass moments with its combination of X Games action and bullet-time violence, but it doesn’t replicate what made the OlliOlli games such Zenlike fun. Those looking for a challenge will find it here, but given Rollerdrome’s bland presentation, imperfect controls, and grueling approach to level design, many players will quickly skate on to something else.