Visually, Disintegration reminds me of many things I've seen before. It evokes Warframe, Destiny, Halo, Anthem, and a variety of other Sci-Fi shooters we've already played, and that's probably not surprising, given that the game is being developed by Halo co-creator Marcus Lehto. But in gameplay, Disintegration doesn't really feel like those games at all. Instead, Disintegration is something entirely unique in the AAA Sci-Fi shooter market and feels refreshing because of that.

Disintegration is essentially about a bunch of futuristic space-age motorcycle gangs going to war. What Marcus told me was initially born of their desire to create a tactical game, grew into something far more action-packed, but with those remnants developed into entirely new ideas. A group of units you once ordered around the field turned into a ground crew that assists you, and the floating overhead camera became a flying motorcycle gunship, capable of blowing away enemies in explosive PVP battles of attrition.

I can't pretend that I'm a fan of Disintegration's trailer. Quirky characters in sci-fi armor throwing around zingers and being goofy doesn't appeal to me, but the gameplay does. In the multiplayer mode I played with other members of the press we could all pick a variety of Hero shooter-like characters, all with their own sense of style - though, to be honest, when every character has their face covered by a helmet, they can only really express themselves through one-liners and an over-the-top sense of aesthetics. Their abilities and powers differed as you'd expect, some were meant for damage and others for support, so I picked a decent damage class and stuck with it. 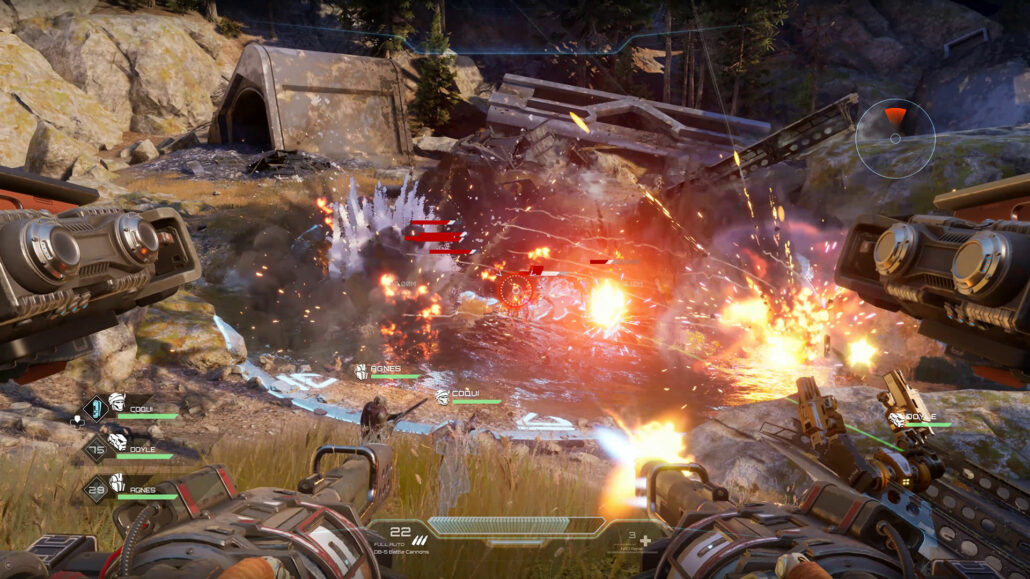 On a controller, you'll be using shoulder buttons to adjust your height, and sticks to aim and turn around the world. Flight feels pretty smooth and similar to other FPS anti-gravity titles. The objective was to find canisters on the map and take them back to a stronghold, or an offensive position. You aim and command your ground crew to pick it up, and then you focus on the battle ahead.

Combat in Disintegration feels fun and flexible, and you quickly get in the habit of ducking and diving behind cover and buildings by adjusting your height while shooting down targets. The class I picked had a strong secondary weapon, where a charged shot upon the enemy would have them receive more damage when I switch back to my primary. I used this to take on my press foes, and my skill with my shooting quickly picked up.

Though that doesn't mean everything was perfect. It was likely because it was a quick multiplayer session following a presentation, but at that point, the game's objectives and gameplay didn't feel completely understood by either myself and everyone else playing in the room. While boosting around the stage in a hovering motorcycle is already exciting enough, the minutiae of the gameplay and objectives felt mostly lost on us. Though of course, the full game should solve all of that.

Marcus and the team at V1 Interactive are promising a full campaign to go along with this already robust multiplayer, so by the time players make their way through it, I'm sure they'll be able to take on the aspects of the multiplayer that were more lost on me at the time. While I'm not a fan of the characters right now, I have high hopes that they'll feel more fully fleshed out and interesting by the time we've gone to battle alongside them when the game releases. Disintegration is an incredibly bold and promising shooter, though only time will tell if it holds up against the titans of the genre.

The game is scheduled to launch next year for PC, PlayStation 4 and Xbox One.