Intel is bringing home their Broadwell processors in second half of 2014 featuring their latest 14nm core process design and massive improvements to power efficiency. Intel's 5th Generation Broadwell processors would arrive for both desktop and mobile platforms and would bring with them some interesting new features which you can read below. 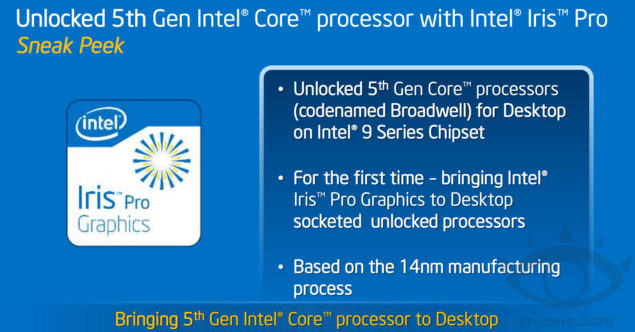 According to report by VR-Zone, Intel's Broadwell processors for the desktop 9-Series platform would feature an improved design with new integrated graphics and a fully unlocked design. As you may have noticed, Intel aims to launch the Broadwell CPUs for the mobile platforms first which include Notebooks, Laptops and Tablets since the architecture is efficient enough to be implemented in small form factor and handheld products. Previously leaked details show that the Broadwell processors would have a TDP of just 3.5W at minimum. The Y series will have upto 2 CPU Cores (4 Threads?) and 4MB of L3 Cache with GT2 GPU. Memory will be 8GB-LPDDR3-1600 and TDP a lowly 4.5W. This can be further reduced to 3.5W in some configurable models. This kind of ultra low tdp would give astonishing battery life in Netbooks and Tablets and we cant wait to see the results.

Moving on to the main story, the desktop Broadwell processors might have been pushed to 2015 and we can see their launch around CES 2015 but Intel will deliver some new tech on the desktop side. The desktop parts have been confirmed to feature Intel's latest Iris Pro graphics chips. Intel Iris Pro graphics chips features double the execution units of the HD 4600 graphics chip (40 vs 20) and comes with its own 128 MB of on-package eDRAM codenamed 'CrystalWell'. This super fast LLC helps deliver the Iris Pro graphics chip with 25.6GB/s + 50GB/s eDRAM (bidirectional) which fulfills its bandwidth requirement. The Crystalwell eDRAM is located on a separate package on the CPU die. Following is a chart from Anandtech which shows the GPU performance of several low tier chips against the Iris Pro:

The Iris Pro has since been now available only on mobility and BGA parts of the Core HQ and R-Series Haswell processors. The Iris Pro graphics chip is now headed for the desktop socketed variants which is a great news to look forward to. Just a few days ago, we posted a showdown of AMD's flagship A10-7850K (Radeon R7 graphics) versus Intel's Iris Pro based Core i5-4570R processor in which the Iris Pro chip showed complete dominance over AMD's fastest graphics solution for their APU.

Leaked details also suggest that the Broadwell GPU itself will be based on the 8th Gen Architecture and will have 48 EUs which is 20% more than Haswell. They will support Dx 11.1, Open GL 4.2 and CL 1.2/2. It will also support the now dated Quick Sync and Clear Video technologies while adding new features such as SVC Hardware Accelerated Decoder and VP8 Hardware Decoder.

We can also confirm that just like Haswell, Broadwell will have a Voltage Regulator on chip.  There will also be a power controller on chip. This will allow as much as C10 level of low power state computing. the U and H variants will both have a Extreme Tuning Utility which will allow easy overclocking of both the CPU and GPU. In such a case, we can obviously expect better performance from the Broadwell line of Core processors.

But as much great the Iris Pro chip sounds for Broadwell, it should be pointed that the Haswell processors with GT3e graphics ended up with much higher prices compared to those with HD Graphics. Intel may add a cut down variant of the Iris Pro chip on desktop variants to reduce prices keeping them at the same levels as Haswell and Ivy Bridge before it otherwise it will just add more cost to these chips. I also don't see the point of adding the Iris graphics on flagship Broadwell processors considering the users will almost certainly end up buying a discrete graphics card that offers better performance. The Iris Pro graphics will however become a much better deal in some budget tier Core i3 and Core i5 chips which could be placed directly against AMD's Kaveri and next gen of Carrizo APUs that arrive in 2015.

Aside from Iris Pro graphics and embedded DRAM, the desktop Broadwell processors will also feature a fully unlocked design that allows overclocking past the limits, the first 14nm process design and compatibility with Intel's next generation 9-Series (Z97/H97/B95) chipset based motherboards.

All this news of Intel supporting the desktop platform is a great thing to hear. Intel will bring Haswell Refresh platform in the next few months with improved design and overclocking features while HEDT users will get the flagship Haswell-E platform as early as Q2 2014 which will introduce the first 8 Core consumer processor from Intel based on the 22nm Tri-Gate architecture. Then 2015 will see the arrival of Intel's Broadwell CPUs which will bring support for DDR4 memory and several new technologies mentioned in this article.