Update: This article was posted two months ago prior to the launch and details of Intel's Haswell Refresh and Devil's Canyon processors. The specification posted in the slides were meant to represent the upcoming CPUs rather than actually confirming them as the final details. The charts have been updated since we have been updated with new information. On a side note, no one had information on the specific SKUs of the Devil's Canyon processors except us (Core i7-4790K and Core i5-4690K).

Intel is planning to introduce their fourth generation Haswell Refresh platform next month in April. While the new platform is expected to be a slight tweak of the existing Haswell processor family, details from VR-Zone confirm that the K-Series Haswell Refresh processors would feature updated overclocking features and the improved TIM design. 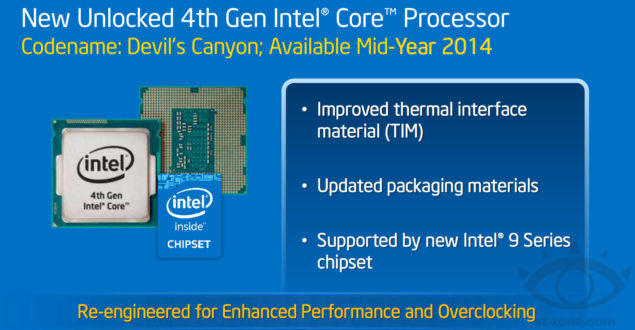 Intel initially launched their fourth generation Haswell processors in June 2013 at Computex. The processors featured the latest 22nm core 3D Tri-gate transistors technology which improved the IPC and efficiency by a decent amount of Ivy Bridge. While the Haswell processors were met with a great response and backed by a variety of overclocking features, the processors didn't happen to be great at overclocking due to the cheaper application of TIM between the IHS (Internal Heat Spreader) and the Haswell silicon itself which resulted in the heat to remain trapped between the chip due to poor contact.

Intel seems to finally be fixing this issue once and for all with their upcoming Haswell Refresh processors. The K-Series Haswell Refresh processors in specific are codenamed Devil's Canyon which would offer used an improved design that incorporates updated packaging materials, improved TIM (Thermal Interface) and processors that are specifically re-engineered for enhanced performance and overclocking. So many users who have been waiting for Intel to update their TIM design since Ivy Bridge can now check out the new processors for their overclocking needs.

The Core i7-4790K will be the flagship processor of the Haswell Refresh lineup and the first 22nm consumer CPU to obtain clock frequency of 4 GHz. It will feature 4 cores and 8 threads along with a fully unlocked design which will allow users to overclock the chip past the limits thanks to the improved thermal design and updated package materials.

Supported by the latest 9-Series chipset (Z97/H97/B95) motherboards which have started to leak just a few days ago, the new Haswell Refresh processors would be available as early as April 2014. The K-Series Haswell Refresh series would arrive a bit later in Mid 2014 so we can expect launch in June or July 2014 timeframe. The 9-Series motherboards would feature superficial changes since they come with almost the same feature set as 8-Series except they add support for M.2 interface and a few other vendor exclusive tech. So far we have managed to obtain names of the Haswell Refresh desktop and mobile variants which can be seen below: 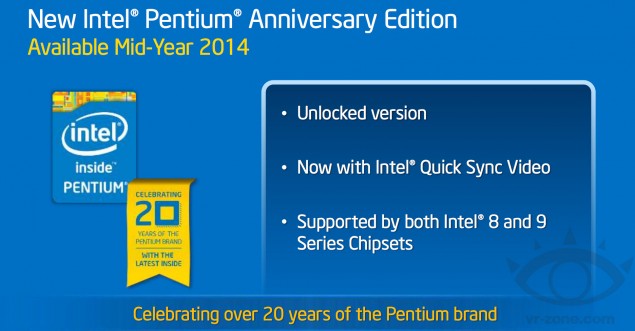 In addition to the Haswell Refresh platform, Intel would also introduce the new Intel Pentium Anniversary edition processors. It has been 20 years since Intel launched their Pentium brand in the computing world. The brand lives on and Intel will update the Pentium lineup with new processors with unlocked design, support for Intel Quick Syn Video and compatibility with both Intel 8 and 9-Series chipset based motherboards.