Biostar & EVGA have also launched their respective Z590 motherboard lineups. The Biostar Z590 lineup includes three new motherboards including their brand new VALKYRIE products and a few B560/H510 models while EVGA has gone all out with two models, the EVGA Z590 DARK & the Z590 FTW WiFi. Colorful also announced a total of 11 Z590/B560 and H510 chipset motherboards that can be seen in pictures below.

The EVGA Z590 DARK once again strikes fear into the hearts of other Z590 motherboards by combining every ounce of power available to the Intel Z590 chipset and fine-tuning it to perfection. This armed and fully-operational motherboard is born from a 10-layer PCB and powered by a 22-Phase VRM. With support for PCIe Gen4 graphics cards and M.2 NVMe SSDs, overclockers have nothing to fear when shooting for the highest scores in any benchmark. 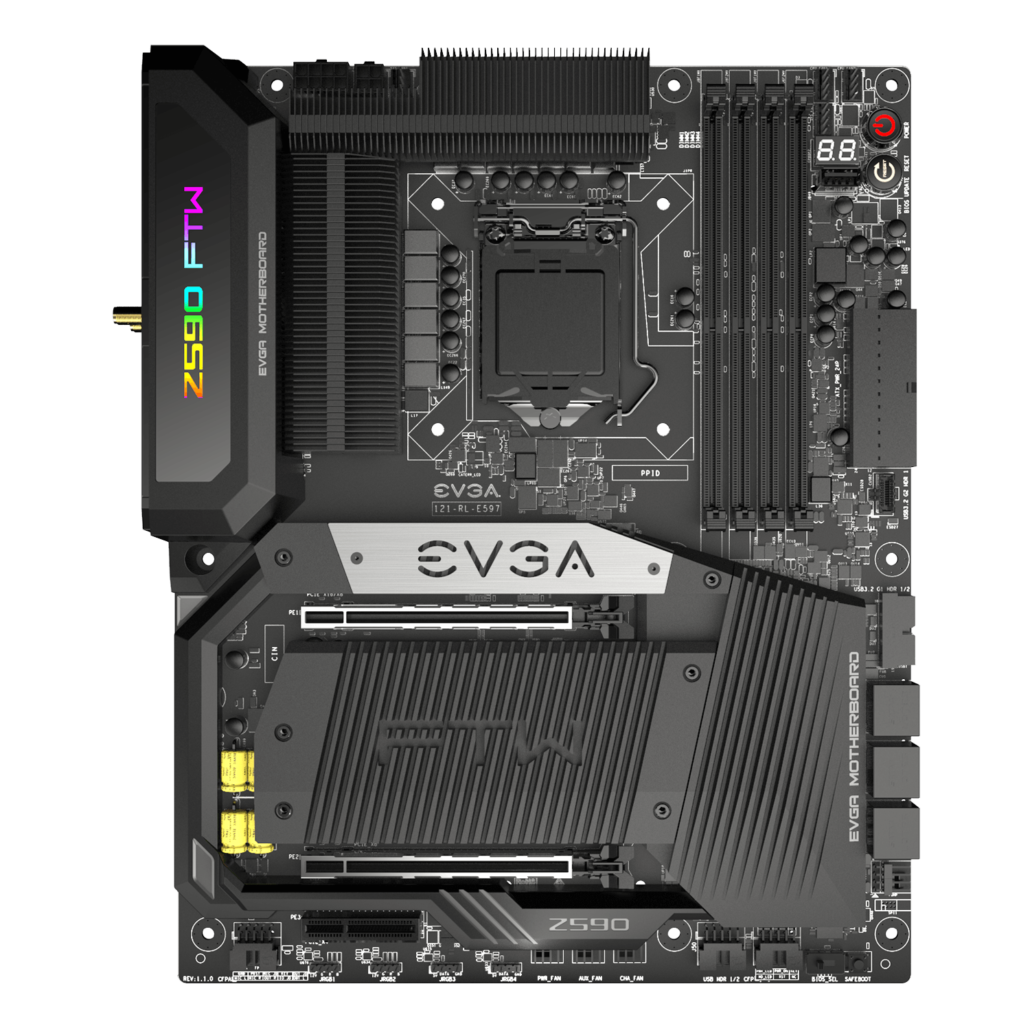 For everyone else demanding the ultimate in performance, the Z590 DARK is loaded with over a dozen USB options, eight SATA ports, two 2.5Gbps NICs + WiFi 6/BT 5.1, 7.1 Channel HD Audio, three M.2 Key-M slots, and two fan headers dedicated to AIO CPU Coolers. We’ve even included a nightlight with the DARK’s first-ever ARGB cover for those times when you might need to see what you’re doing. As a wise overclocker once said, “Once you start down the DARK path, forever will it dominate your destiny.” and with the EVGA Z590 DARK, that destiny is sure to be filled with shattered records and countless victories on the battlefield.

The EVGA Z590 FTW WIFI is what you’ve been waiting for to bring out the best of the 11th Gen Intel Core i9 processors, which now feature support for PCIe Gen4 graphics cards and NVMe SSDs.

This motherboard redefines what it means to be For The Win with a completely updated aesthetic, a rededication to maximizing the features on an ATX form factor, and an unrelenting desire to give enthusiasts all the power, performance, and stability they can handle with a 17-Phase VRM and 8-layer PCB. In addition to blazing-fast 4800MHz+ memory support, WiFi 6/BT 5.1, DisplayPort 1.4 and HDMI 2.0, and an excessive number of USB options, the EVGA Z590 WIFI also features multiple ARGB headers to customize your system lighting, a gigabit NIC, and 7.1 Channel HD Audio. The EVGA Z590 FTW WIFI is truly the next generation of FTW motherboards.