ASUS is initially introducing six Z590 motherboards in its product lineup. ASUS will be segmenting its product lineup into three categories which include Gaming, Productivity, and Commercial. These segments will have their own unique sub-brands such as ROG Maximus, ROG STRIX, and TUF Gaming for the Gaming segment, while PRIME, Pro Art, and Pro series motherboards would be featured in the Productivity and Commercial segments.

ASUS's Z590 lineup of motherboards include:

The ASUS ROG Maximus XIII Extreme Glacial is as high-end as ASUS's Z590 motherboard lineup can get. The main difference between this and the standard Extreme variant is that the Glacial includes a pre-installed water block and is primarily aimed at custom-loop cooled PCs. Both boards come up with an 18+2 phase power delivery system. 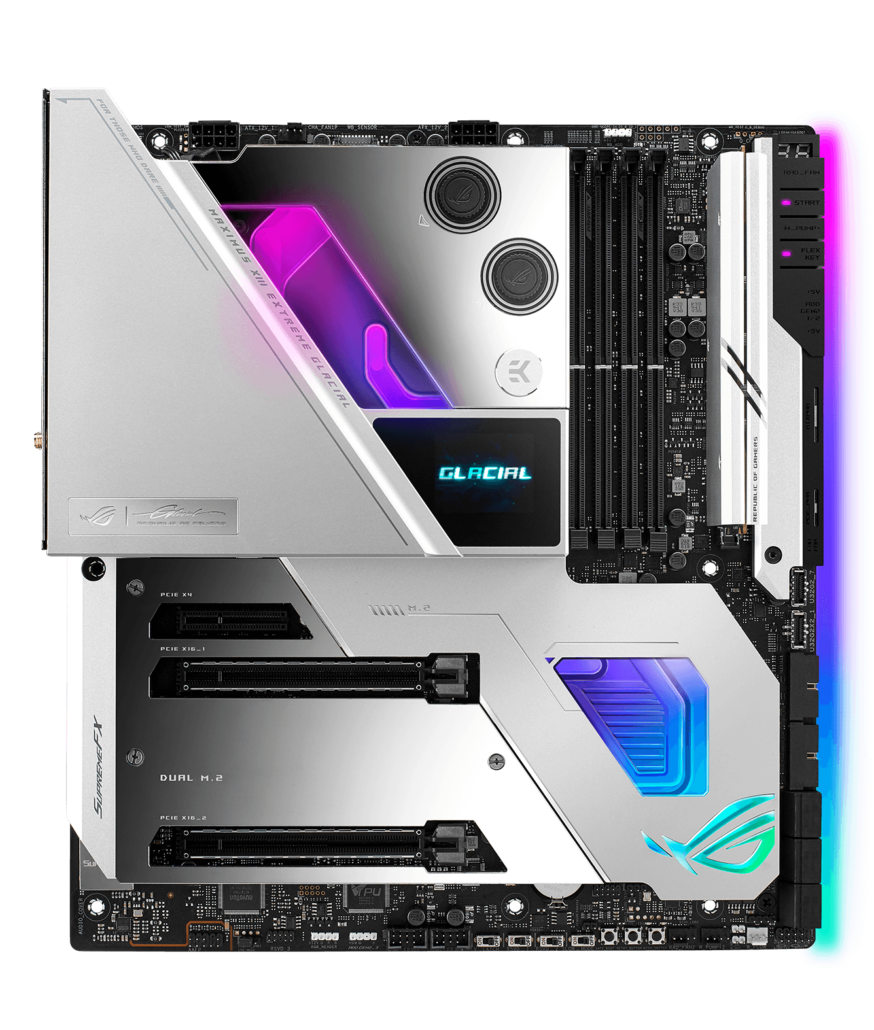 The board features a dual 8-pin connector configuration to power the CPU socket, has four DDR4 DIMM slots which will be able to support up to 128 GB capacities at some really fast speeds There also seems to be a new version of the DIMM.2 expander slot which features a silver metallic color instead of the matte black colors it used before. There are several buttons for overclocking & fine-tuning the board and even voltage measurement points that are right next to the DIMM.2 slot that is essential for enthusiasts and overclockers. 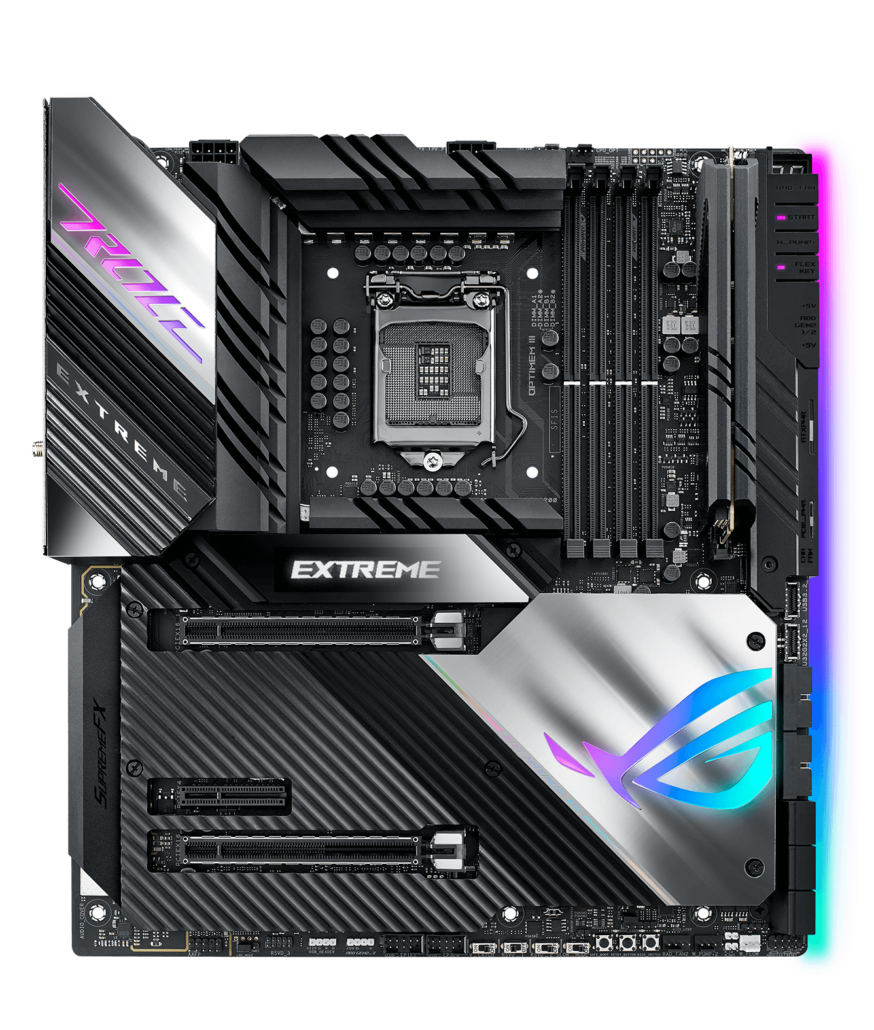 Expansion slots include two PCIe 4.0 x16 and a single PCIe 4.0 x4 slot. The motherboard itself has two M.2 slots, both of which sit beneath the aluminum front cover while the PCH also gets cooled by the custom-loop water block. The DIMM.2 slot will allow for two additional M.2 slots though we don't know if they will operate at Gen 3 or Gen 4 speeds. Storage includes 6 SATA III ports and dual USB 3.0/3.2 front panel headers.

Moving over to the ASUS ROG Maximus XIII HERO, this mainstream ROG Z590 motherboard will be priced at around $400 US. The motherboard seems to carry WiFi so it looks like we won't see a non WiFi implementation of this motherboard within the Z590 generation and only one model will exist. The CPU is once again powered by dual 8-pin connectors but the power delivery is not comparable to that of the Extreme variant. The memory design is similar and we see large aluminum heatsinks with embedded RGB LEDs over the VRMs and underneath the I/O plate. The VRM heatsink includes a metallic Heatpipe for faster and efficient heat dissipation. 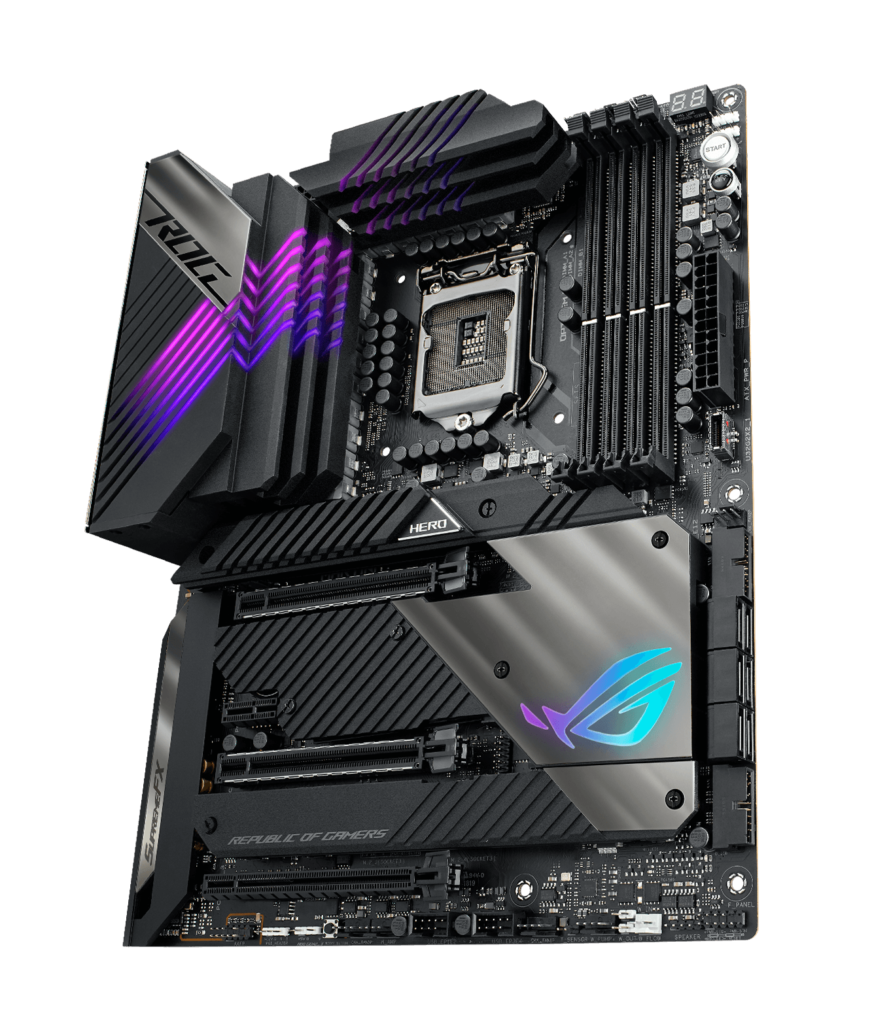 The ASUS PRIME Z590-A motherboard features an 8+6 pin connector configuration to power the CPU socket. It also carries an impressive 18 phase power delivery and has two large aluminum heatsink covering the VRMs. The rear I/O plate covers the extended heatsink and delivers a nice touch of RGB illuminating the PRIME logo. The motherboard has four DDR4 DIMM slots that can support up to 128 GB capacities with speeds of around 5000 MHz (OC+).

The ASUS TUF Gaming Z590 PLUS WiFi motherboard seems to feature a similar power config as the Z590-A PRIME. But unlike the white color scheme that the PRIME motherboard carries, the TUF line comes with a black color scheme with yellow and grey accents. The motherboard has two full cover aluminum heatsinks that go on the VRMs.

Expansion slots include two PCIe 4.0 x16 (x16/x4 electrical) two PCIe 4.0 x1 and triple M.2 slots. All M.2 slots are covered by heatsinks but only like the PRIME, only a single one offers full PCIe Gen 4 functionality while the other two run on the PCIe 3.0 protocol. Storage options include four SATA III ports.