On Twitter, Rogame has spotted an Intel Tiger Lake CPU benchmark that features four cores and a base clock of 2.8 GHz. Most of the information regarding the benchmark itself is left blank; this includes almost all of the graphics card information but it shows that Tiger Lake-U CPUs are finally nearing completion as they are headed for launch in mid-2020.

Intel's Tiger Lake-U CPUs Gets A Clock Boost, Quad-Core With Base Clocks of 2.8 GHz Spotted

The information that is on display in this new benchmark is the reported base clock of 2.8 GHz, and the core count being a total of four while featuring simultaneous hyperthreading for a total of eight threads. The benchmark was conducted on a Tiger Lake test platform and features 16 GB SODIMM memory. 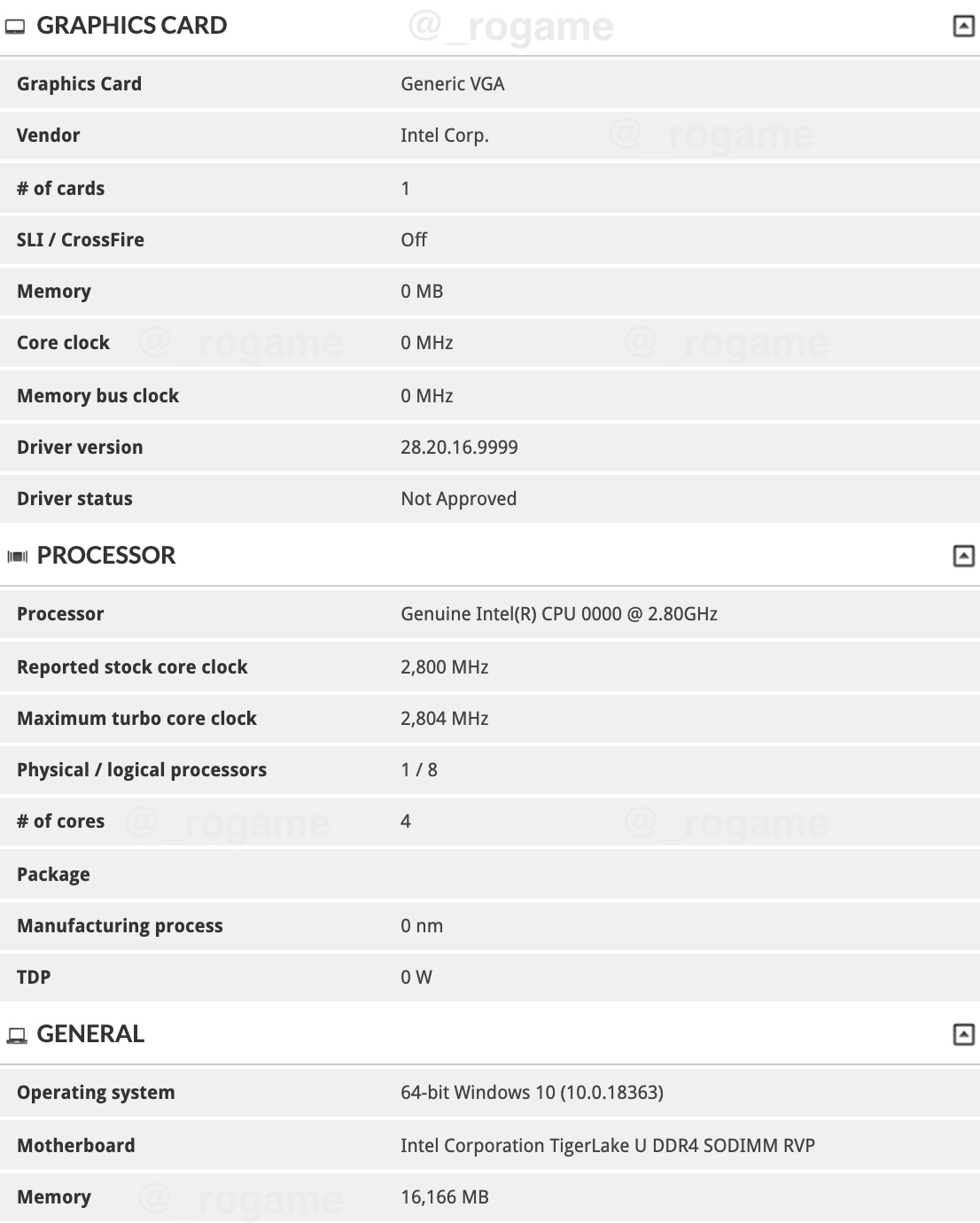 An Intel Tiger Lake-U CPU has been spotted with 4 cores, 8 threads, and a base clock of 2.8 GHz which is higher than anything Ice Lake-U and Comet Lake-U CPUs featured. (Image Credits: Rogame)

The first key consideration about this leak is the 2.8 GHz base clock. This is higher than anything that Intel has offered in its 10nm Ice Lake-U and 14nm Comet Lake-U lineup. The maximum clock speed that was achieved on the Ice Lake-U processors was 2.3 GHz and that was for the Core i7-1068G7 processor. Now the boost clock isn't mentioned but it likely to cross 4.0 GHz considering the mentioned base clock.

This also isn't the first time we have seen such high base frequencies on Intel's Tiger Lake-U CPUs. Another leak for the Tiger Lake-U Core i7-1185G7 processor showed a base frequency of 3.00 GHz across 4 cores and 8 threads. The boost clocks on both chips were reported similar to the base clocks which shows that boost frequency might be bugged on earlier revisions of Tiger Lake CPUs.

The Tiger Lake-U family would consist of 15-28W TDP CPUs and would feature 4 cores and 8 threads, albeit at much higher clock speeds with boost nearing 4.50 GHz. These CPUs would also feature GT2 tier, Gen 12 Xe GPUs, and would come in the UP3 (BGA 1499) package.

First up, they will have the new Willow Cove cores replacing Sunny Cove cores which are currently featured on Ice Lake processors. Along with the new cores, we will get cache redesigns as stated above, new transistor-level optimizations, and enhanced security features. Intel will also be featuring their Xe GPUs on Tiger Lake chips which would deliver a 2x increase in perf over the Gen 11 GPU featured currently on Ice Lake chips.