Intel would be launching their upcoming Ivy Bridge-E HEDT (High-End-Desktop) platform in early September as reported by VR-Zone. The site confirms that the launch of the new processors would take place between 4-11th of September. A more exact date would possibly be 9th September however this isn't official yet.

22nm architecture featuring high K+ metal gate core technology. Although its just a die shrink of the 32nm Sandy Bridge core, the Ivy Bridge-E CPUs would feature improved performance (around 10% increase as seen in the benchmarks leaked last week), 40 PCI-Express lanes (Generation 3.0), DDR3-1866 MHz memory support, Intel Hyper Threading, Intel Turbo Boost 2.0 and complete Unlocked CPU designs. The Ivy Bridge-E processors would be compatible with the current X79 chipset based LGA 2011 motherboards and would have 130 Watt TDP across the entire lineup. AMD is also preparing a new FX-9000 series lineup to compete against the $1000 chips from Intel which can be seen here.

Last of all is the entry level Core i7-4820K which will retail around the $290-$350 mark. As you may note, this time Intel thought it was better off to ship their entry level HEDT CPU with an unlocked multiplier while the Sandy Bridge-E based Core i7-3820 didn’t had an “K” unlocked design. Specifications wise, the Core i7-4820K ships with 4 Cores and 8 threads, 10 MB of L3 cache and 3.70 GHz base and 3.90 GHz Turbo frequency. While Ivy Bridge-E is scheduled for early September as confirmed in today's report, Intel’s next generation was also leaked as the Haswell-E HEDT platform codenamed “Lituya Bay” which would arrive in second half of 2014.

Haswell-E chips would be based on the 22nm architecture and remain compatible with LGA 2011 socket however a new X99 "Wellsburg-X" chipset would be implemented on the next generation motherboards which would allow for native DDR4 memory support. You heard it right, Haswell-E would be the first HEDT platform by Intel to bring DDR4 memory support and feature upto 8 cores and 20 MB of L3 cache. More details can be found here. 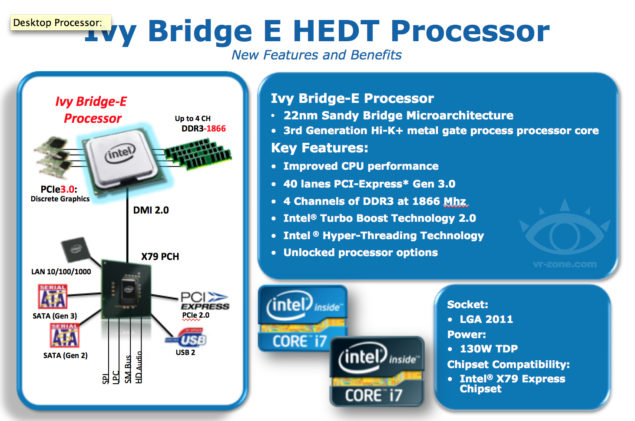