Intel's next generation Haswell-E HEDT platform is something that enthusiasts and overclockers are going to crave for according to the details and slides revealed thanks to VR-Zone. It was already confirmed through a previous roadmap leak that Intel's Haswell-E would arrive by the end of 2014, a few months after Intel would launch their Haswell refresh platform for the LGA 1150 socket. 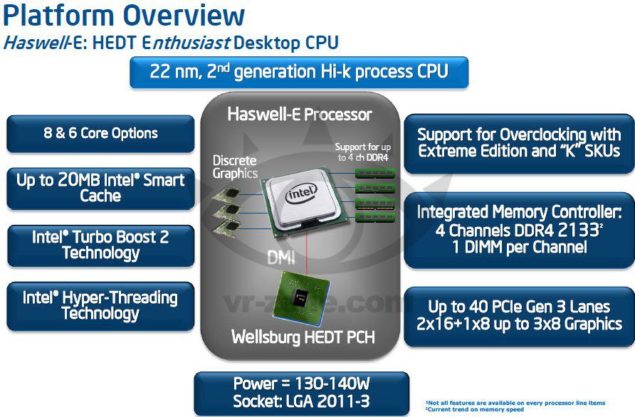 Intel's Haswell-E platform would replace the current Ivy Bridge-E HEDT (High End Desktop) platform and would be based on the latest second generation 22nm Hi-K process architecture. The most interesting part is that Intel would finally be providing upto 8 core SKUs in their desktop lineup with the launch of Haswell-E. Intel has detailed 6-8 cores for their Haswell-E processors that would be equipped with massive 20 MB of L3 smart cache and just like Haswell, would feature an integrated voltage regulator "FVIR" and the flagship part would ship with TDPs around 130 - 140W which is impressive since that's 10-20W under what we get on the Core i7-3970X which has 6 cores compared to the Haswell-E beast that would feature 8 cores, faster clocks and 20 MB of L3 cache. Intel is aiming for an 55% IPC improvement over quad cores with their flagship Haswell-E processors.

Just like Haswell and Ivy Bridge-E before it, Haswell-E would retain the great overclocking features that would ship with the "K" series and "Extreme Edition" processors. Both the memory and processor can be overclocked beyond limits with unlocked turbo limits, unlocked core ratios in 80/100 increments, programmable iVR voltage, support for XMP mode, unlocked memory controller and voltage limits, native support for memory upto 2667 MHz, Unlocked PCH and PLL voltage controls and more. 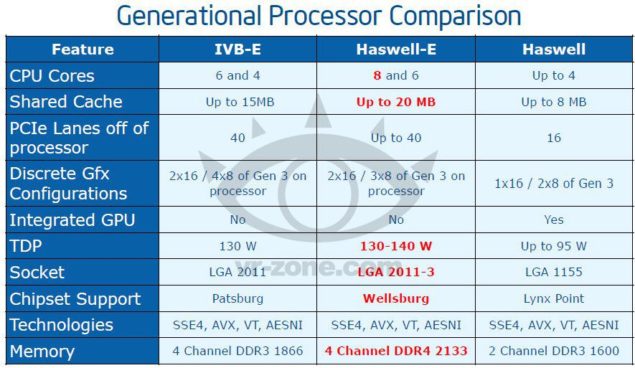 A single Haswell-E processor would feature 2 x16 and 3 x8 Gen 3 PCI-e support with 40 lanes and would be directly connected to the DDR4 memory controller and the Wellsburg X99 chipset. The feature set would remain the with technologies such as SSE4, AVX, VT, AESNI under its belt. Unlike the Haswell processor which come with 4th gen HD graphics core, the Haswell-E platform wouldn't feature built-in graphics but someone buying such an costly processors will definitely go for a discrete GPU for graphics.

Coming to the memory controller, yes, Intel's Haswell-E is officially the first HEDT platform to feature support for DDR4 memory. The DDR4 memory controller lies on the processor itself through which it is directly connected. The new DDR4 memory modules consume only 1.2 V of power compared to 1.65/1.5V standard with DDR3. The can feature upto 16 banks of memory and require a 288-Pin DIMM connectors which would be available on the new X99 chipset motherboards. The DDR4 memory controller offers Quad channel memory support. DDR4 would offer faster clock speeds and the Haswell-E platform supports frequencies o 2133 MHz, 2667 MHz O.C +.

Ofcourse, the platform would require a new platform control hub or PCH. Intel is preparing their latest Wellsburg-X chipset that would power the next generation HEDT platform featuring 14 USB ports (6 USB 3.0 and 8 USB 2.0), 10 SATA 6GBps ports, integrated clock support, 8x1 PCIe 2.0, Clarksville GbE PHY and the Realtek Audio Codec.The chip has a max TDP of 6.5W and measures 23x22mm which is larger than the X79 chipset.

Intel is also preparing the latest LGA2011-13 socket which has similar dimensions but a different ILM key pattern which allows only for Haswell-E processor compatibility. You can also note a different heatspreader over the die on the Haswell-E chip which looks familiar to the engineering sample we saw listed on EBay months ago, it can be seen here. Intel adds compatibility for both their Channel DRX-B Liquid cooler and T-HPHS air cooler with the LGA 2011-3 socket for Haswell-E processors.

With Haswell-E, Intel looks to be raising the bar of pure x86 IPC performance. On the mainstream platform, Intel would release a Haswell refresh platform which would feature support with LGA 1150 socket based on the Z97, H97 chipsets in Q2 2014. 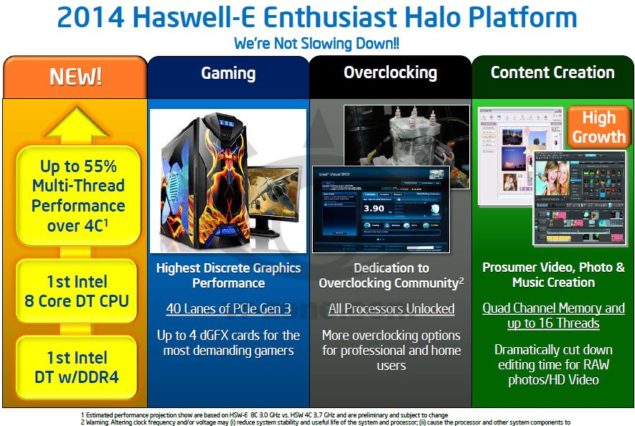 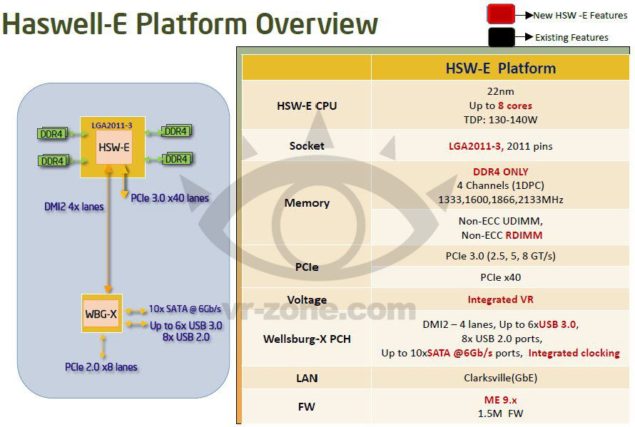 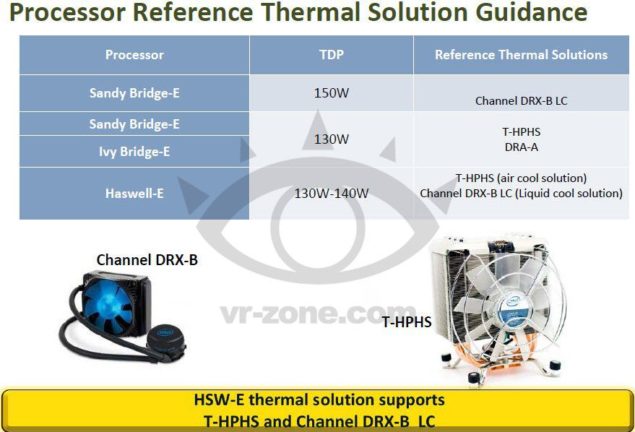