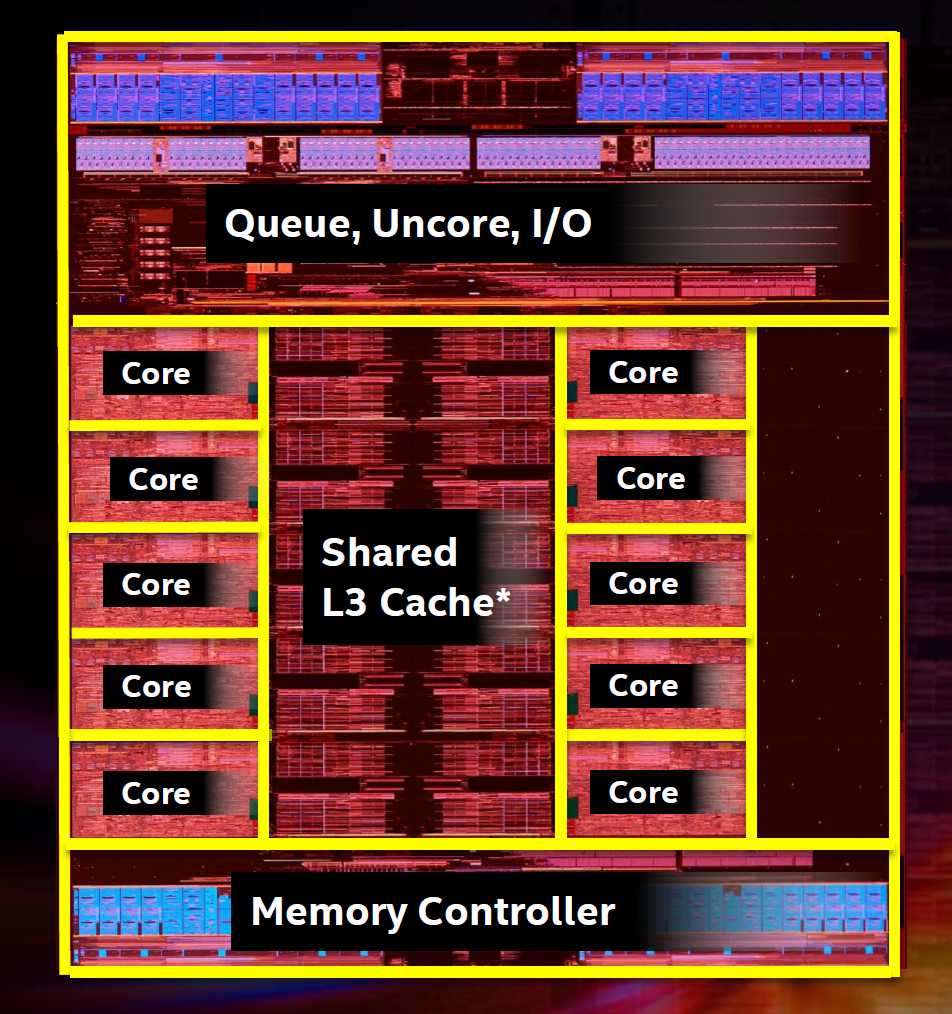 Intel has unleashed their next generation Broadwell-E family which includes the flagship Core i7-6950X CPU. The Broadwell-E family is based on the 14nm process node which delivers better efficiency than 22nm node along with better performance in general. All Broadwell-E processors feature support on X99 platform that offers enthusiasts great performance and overclocking capabilities. 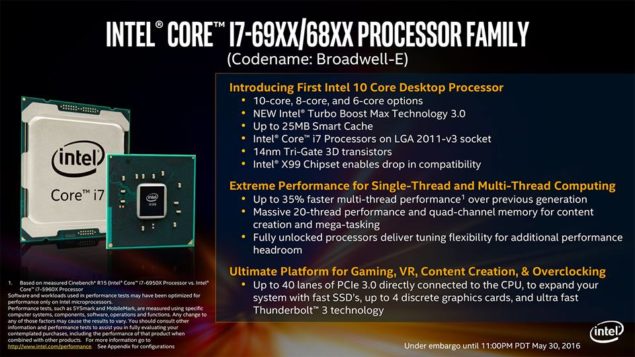 The Intel Core i7 HEDT processors based on Broadwell architecture feature lots of new updates!

Intel's Broadwell-E Is Based on a Beefy 3.4 Billion Transistor Die

The Broadwell-E family is based on the same process and architecture which we saw recently on the Broadwell-EP processors that incorporate several billion transistors under the hood. In the official launch post, we covered that the Broadwell-EP parts were based off three different dies.

We know that Intel’s Broadwell-E processors will have four variants, a 10 core variant, a 8 core variant and two 6 core variants. Like the Broadwell-EP, the Broadwell-E lineup can either use a single die configuration such as the LCC (Lowest Core Configuration) which houses up to 10 cores and seems like the perfect candidate for the HEDT family. As we suspected, that is the case and Intel has went with the LCC die to accommodate the latest processors. 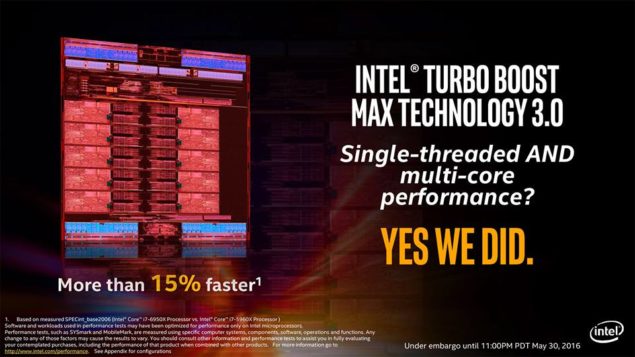 Intel has a new feature on-board the Broadwell-E processors known as Turbo Boost Max 3.0. With this technology, Intel expects to deliver up to 15% better single threaded and multi-threaded performance. Broadwell-E with Turbo Boost Max 3.0 allows each core to boost individually to help performance not only in multi-threaded applications but also single threaded applications.

TBM3 requires an operating system driver and will boost the frequency of a single CPU core when a single threaded program is being used. It requires a driver, similar to Skylake’s Speed Shift feature (which is not in Broadwell-E), which should be distributed in new X99 motherboard driver packages but will be rolled out in Windows 10 in due course. It also comes with a user interface. Via Anandtech

Turbo Boost Maximum 3.0 can be configured through software to select the highest performing core on a Broadwell-E chip and prioritize it for a specific set of applications that utilize single cores. In these apps, the processor will be able to boost beyond its specifications. In the case of Core i7-6950X, we can get as high as 4.0 GHz clock speed in single-threaded workloads. 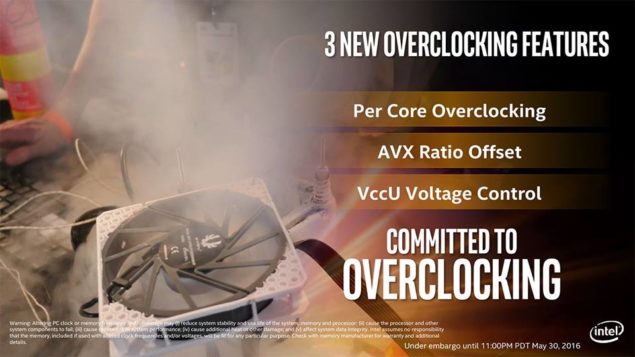 Aside from Turbo Boost Max 3.0, Intel has also promised much better overclocking features such as per voltage overclocking, AVX ratio offset and VccU voltage control. Intel Broadwell-E chips deploy a new heatspreader and a fully soldered design that will help tone down temperatures while the fine tuned Broadwell architecture will keep power delivery smooth and steady. 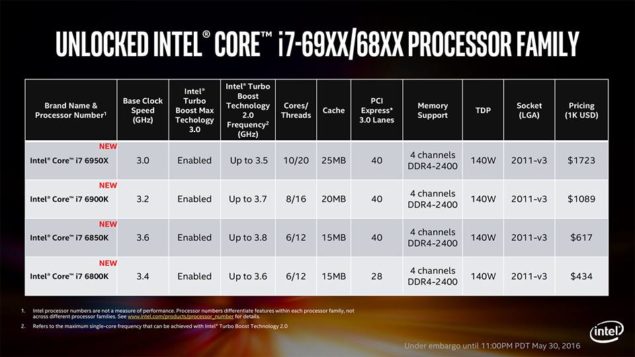 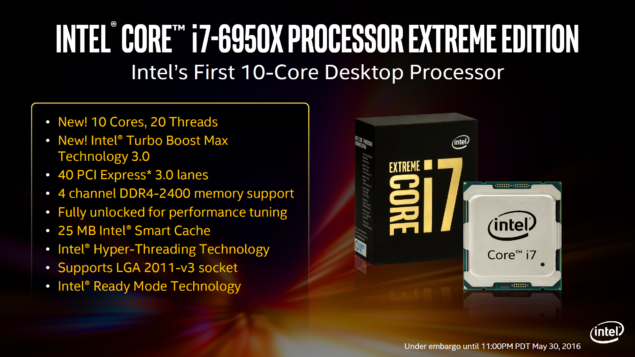 The Intel Core i7-6950X will pack 40 PCI-E lanes. The total TDP of the chip is rated at 140W. All Broadwell-E processors are designed to support quad channel memory clocked at 2400 MHz (native speeds). The CPU is Intel's first and the worlds first Deca core processor so I think we know why Intel is charging such a high price for this chip.

The Intel Core i7-6900K is the second fastest processor in the series and is essentially a more fine tuned Core i7-5960X with better clock speeds on a 14nm process node. The Intel Core i7-6900K features 8 CPU cores and 16 threads. The Core i7-6900K is clocked at frequencies of 3.2 GHz base and 3.7 GHz boost clocks. There are same 40 PCI-Express 3.0 lanes on this chip while featuring a 140W TDP. The total L3 cache available is 20 MB and you can expect users on older Sandy Bridge-E or Ivy Bridge-E platforms to move to this processor. 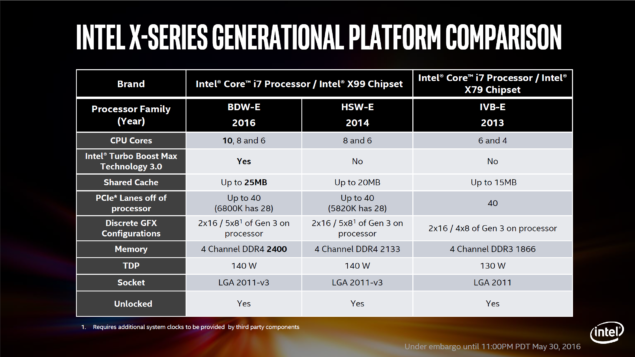 At $1089 US, the Core i7-6900K is very similar in terms of pricing to the Haswell-E flagship. Even the specs are similar although Broadwell-E has new technologies and a more tuned architecture. For users who are likely to upgrade to X99, the 6900K can be a good yet expensive update however the performance benefit in threaded applications will be decent enough.

The Intel Broadwell-E family also includes two 6 core processors, the Core i7-6850K and the Core i7-6800K. Both CPUs have 6 cores and 12 threads and come with 15 MB of L3 cache but the interesting thing is that both chips are placed for the entry level enthusiasts which means these will be retailing at price of $617 US (6850K) and $ 434 US (6800K) respectively.

Intel has officially launched their Broadwell-E family which is now available for consumers to purchase along with the latest X99 motherboards. We have a list of motherboards already detailed that can be seen below: